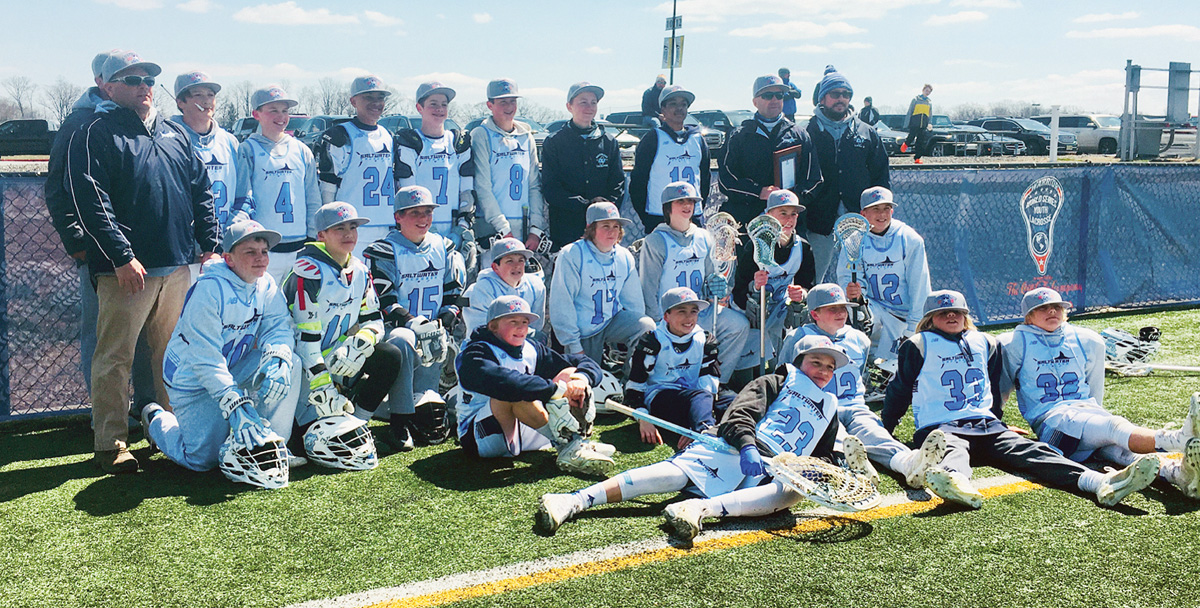 After a weekend of intense lacrosse competition in Bel Air, Md., the local Saltwater Lacrosse 2023 boys’ team, composed of youth players primarily from the Delaware beach area and the Eastern Shore of Maryland, qualified to participate in the Warrior World Series of Youth Lacrosse, to be held in Denver, Colo., July 2-4.

“To say we are proud of the determination and teamwork of these boys would be an understatement,” said Dennis March, one of the Saltwater Lacrosse Club founders. “Our team faced very stiff competition, from clubs such as Next Level Lacrosse of Bethesda; 3D Mid-Atlantic; and the Cavaliers from Virginia. Our boys rose to the challenge, and we could not be more thrilled they will be competing in Denver on a national — actually, international — level this summer.”

The Warrior World Series of Youth Lacrosse invites the nation’s top 13U boys’ lacrosse teams to compete in one of six U.S. regional qualifiers, of which the tournament in Bel Air, Md., was one. The top teams from each region advance to the championship series in Denver, where they will play against the best teams from the other regions and a select group of international teams, including teams from Israel, Canada and the Iroquois Nation.

The championship game will be played at Sports Authority Field at Mile High on July 4 and broadcast live on ESPN2.

Tom Pickard and Pete Coveleski, head coaches of the Saltwater 2023 team, led the team through six games in one recent weekend to qualify them for the World Series. Both have sons on the team and have spent years with this group of players as many have been part of the local Atlantic and Beach lacrosse programs.

“Over the years, these boys have become not only talented lacrosse players, but close friends and supportive teammates,” said Pickard after the qualifier. “Going to Denver to compete in the World Series of Lacrosse is a dream come true for these kids. This past weekend, we played against an extremely high level of competition, teams with year-round access to indoor turf practice fields and state-of-the-art facilities and emerged with a ticket to Denver. Pete and I could not be prouder of these boys.”

The club plans to hold a variety of different fundraisers over the next three months to help defray the cost of the trip to Denver in July.

“We are brainstorming ideas now for a few team fundraisers,” said Pickard. “We want to make sure the boys and their families have a great experience together out in Denver and not have to worry about the finances too much.”

So far, the club has partnered with Chipotle for a donation day at their Rehoboth Beach and Ocean City, Md., locations on Monday, May 21, when the restaurant will donate 50 percent of their proceeds to the team.

The mission of the Saltwater Lacrosse Club is to promote the great game of lacrosse to boys and girls of the Eastern Shore of Maryland and Delaware, providing a safe and fun opportunity for the players while emphasizing the importance of good sportsmanship and teamwork.

“Through guidance and leadership, we hope to provide the skills for our players to become outstanding players but more importantly, outstanding citizens,” said Greg March, one of the club’s founders. “We plan to soak up every minute in Denver with the team, representing Southern Delaware and the Eastern Shore through Saltwater Lacrosse, and leave with memories for a lifetime.”

Anyone interested in contributing to the team’s travel expenses can contact Greg or Dennis March at (443) 528-9029 or dennism@saltwaterlax.com.