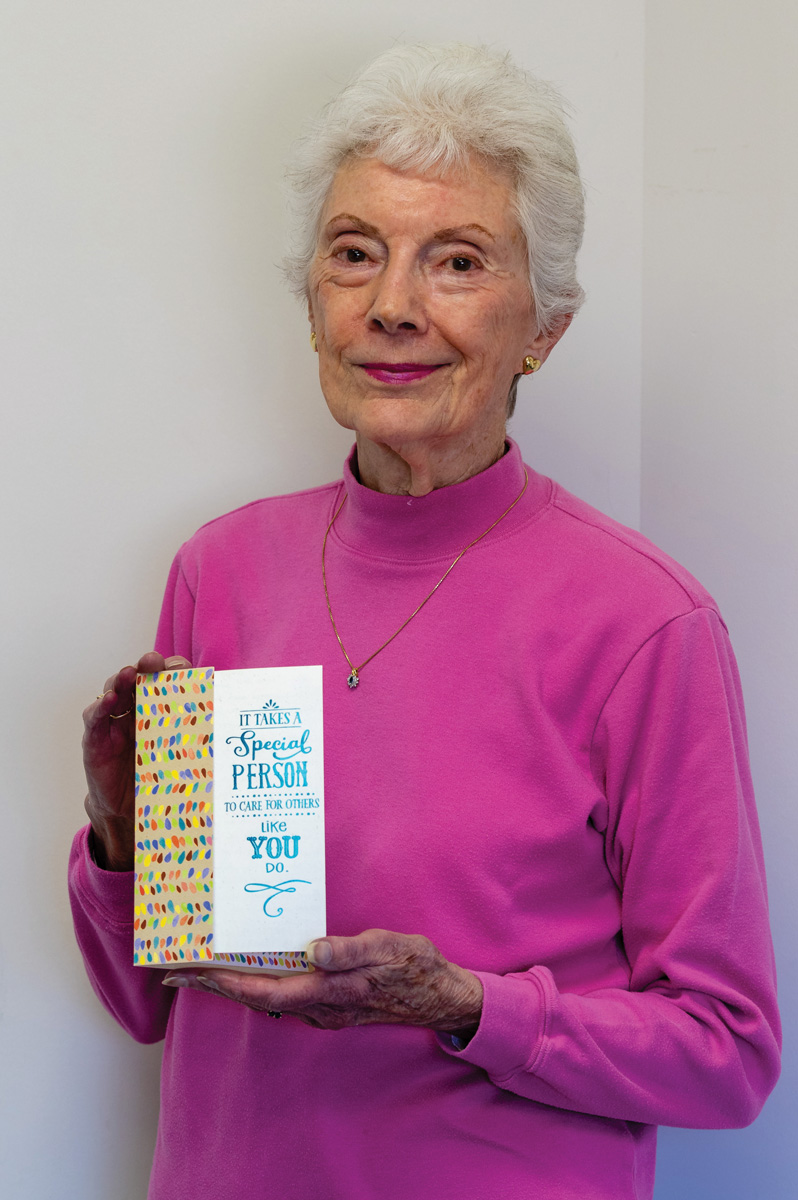 While on a flight with a friend, Ocean View resident Eileen Uecker found a $100 bill in her seat.

“I reached in to pull the seatbelt across, and there was something in the slot there, and it looked like a dollar bill,” recalled Uecker. “I pulled it out, and it was a hundred-dollar bill. I thought, ‘Oh, dear — this means I have to do something good with this money.’”

On the second leg of her flight, Uecker took the middle seat, flanked by her friend and a stranger wearing a U.S. Air Force baseball hat.

“As the flight ensued, we chatted and talked, and I learned he was a retired veteran. I said, ‘You don’t look old enough to be retired.’ He said, ‘Well, I’m 100 percent disabled.’ I said, ‘You look OK.’ He said, ‘It’s because you can’t see the injuries.’ Apparently, it was his back…”

As Uecker and the vet chatted, she asked him if he’d heard of Quilts of Valor, a foundation that awards patriotic quilts to “U.S. military service members and veterans who have been touched by war.” The veteran had not heard of the foundation.

Uecker, a member of Delmarvalous Quilters — a quilting guild that meets on the fourth Thursday of each month in Georgetown — asked her veteran seat-mate if he would like a quilt.

“He said, ‘Absolutely — anything that is patriotic, I would love,’” she recalled. “I got his name and telephone number, area code 302, which I thought was uncanny.

“I got the quilt made. I made all 20 blocks myself, and then I had the rest of the group in our quilt guild help do the next steps, and I used the $100 to have it quilted by a long-arm quilter. There was a small balance left over from that, and she just put it towards the next quilt that was going to be done. So, the money was put to good use.”

Once the quilt was completed, Uecker tried to contact the veteran, leaving him three voicemails, with the last stating should would send him the quilt.

“I never heard back,” she said.

But that didn’t stop Uecker from following through. With the help of a computer and internet savvy friend, Uecker was able to get an address for the veteran, in Magnolia, Del..

Three months later, Uecker received a hand-written thank-you card from the veteran, with a heartfelt sentiment that made her cry.

“This really touched my heart, because my dad was a disabled Army veteran. So many in my family have been in various wars. My husband was in the service, my older brother, all my brothers-in-law… my dad, my uncles — oh, my goodness, it goes way back. We’re very much a veteran family.”

Since its inception, Quilts of Valor has awarded 185,874 quilts, and has a national list of recipients. The name of Uecker’s veteran was placed on the list.

“It makes my heart feel good that I can do something,” she said. “I think that’s just it — that’s why it meant so much to me… I’ve made all these quilts, and I never know who they go to. This means more because I knew who it was going to.”

This was not Uecker’s first Quilt of Valor; she has helped the Delmarvalous Quilt Guild make many quilts, including quilts given to the veterans who visit the area through Operation SEAs the Day.

“Mostly I would just make blocks, because you can just sit and have the TV on and sew,” she said. “They don’t have to be, but the ones I make are red, white and blue in a 9.5-inch block. The other ladies do the finishing. You put a sashing around each block and then put the blocks together. Then you put the boarder around the outside of that. Then you have the batting and the backing, and then the quilting and then the binding. It’s a many-people process. When everyone is pitching in, it really makes things go faster.”

Uecker first started sewing as a child and kept growing her skillset over the years.

“When I was a kid, I made doll clothes by hand. My mom would have extra pieces or something. It was something I could do and enjoyed doing, I guess,” she said. “The first class I went to was, gosh, in the 1970s. I remember the block very well — it was called ‘Stained Glass.’ They were tiny little pieces.”

The Delmarvalous Quilters have more than members of all ages and skill sets. Uecker said the group is “absolutely” always looking for new members. And if they don’t know anything about quilting? No problem!

“We’ll teach you!” she said enthusiastically. “We have a terrific guild. Everybody is so gracious. They have certainly helped me over the years. I’ve continued to learn the ins and outs and different things.”

The guild also hosts workshops and a variety of other programs, which are open to members.

“We do things called ‘comfort quilts’ that are distributed to a wide variety of places,” said Uecker. “Then we have kits for Quilts of Valor. They can take a kit for one block home and do it at home.”

And for those who are wary of driving to Georgetown at night — don’t fret, there are members who carpool to the monthly meetings.

“A lot of seniors don’t like to drive at night. In fact, I don’t. I always grab a ride with somebody else. They usually try to set up a carpool meeting at the Giant parking lot.”

The guild also offers more than just the opportunity to quilt, but also a great deal of comradery.

“Not only do you get the socializing but you learn things and make good friends. It’s just a really well-rounded way to be a senior,” Uecker said.