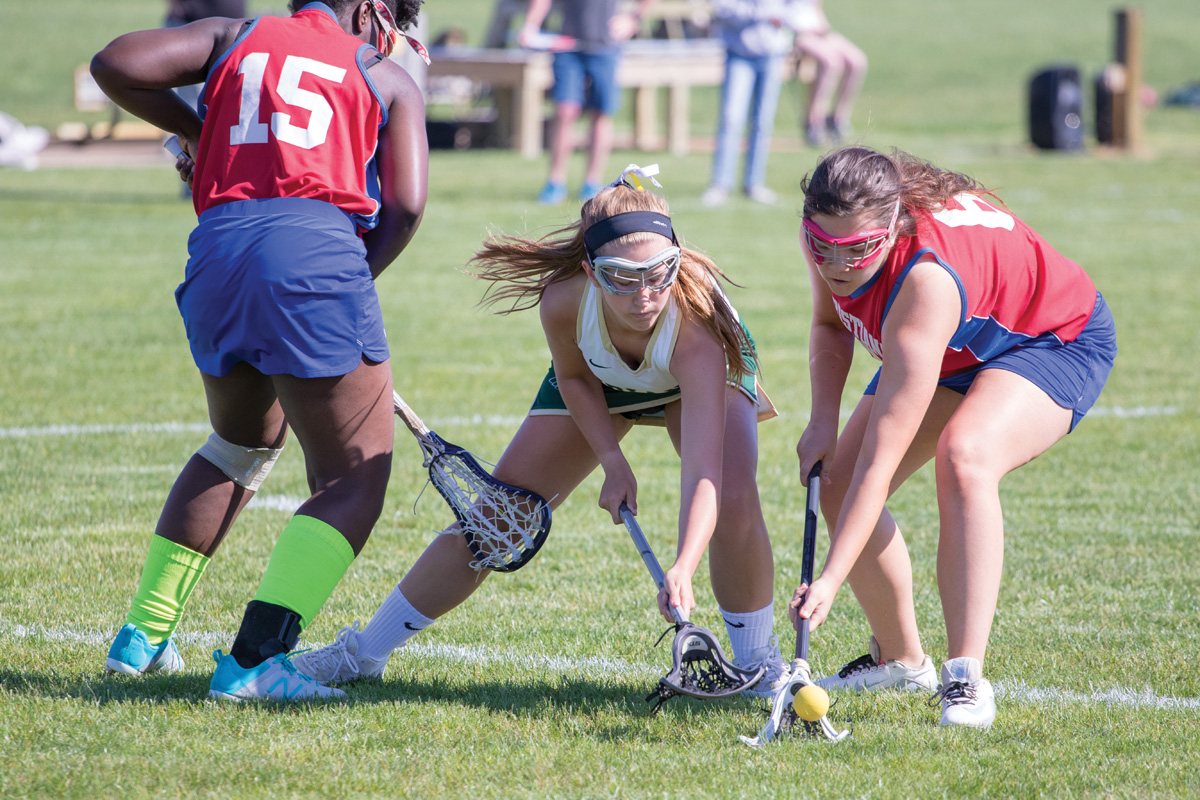 It was a total team effort for the Indians as 15 different players scored in Monday’s non-conference meeting with Christiana en route to an 18-0 win.

IR outshot their guests 40-3. Davis made three saves between the pipes in her first action as goalie this season.

Delaney Brannon led the way for the Indians with five goals in their non-conference win over visiting Delaware Military Academy on May 3.

Kealey Allison and Helen Davis each scored three times, while Olivia Lease, Brianna Dulsky, Drew Szlasa and McKenzie Johnson all chipped in with one goal apiece.

The Indians held an 8-4 lead at halftime. For the game, they outshot their opponents 22-9.

Mya Parks made seven saves in front of the cage to pick up another win for IR.

Allison had four assists for the Indians, while Szlasa had three and Davis two. Johnson, Kaylee Hall and Sarandon Slebodnick each picked up helpers as well.

Scoring four times in the first half, and five more times in the second, proved the Indians were as hot as the weather Thursday night, May 3, in a 9-0 smashing of Milford.

Izzy Binko, Anastasia Diakos, and Avery Congleton each scored twice for IR, while Olivia Garvey, Bella Keith, and Lauren Meehan each contributed one goal for the winners.

Binko’s first goal put IR on the board just one minute into the game. The Indians never looked back from there.

IR outshot Milford 40-3 in the contest and picked up seven corner kick opportunities, to none for Milford.

Fabrea McCray made just one save for another shutout win.

Another impressive performance from the Indians’ girls’ soccer team as they cruised to a 5-0 win over host Smyrna on Monday night, May 7.

Bella Keith added a goal for the Indians in the second half on a pass from Grace Engel at 42:24 to put the finishing touches on the win.

IR was credited with 30 shots in the game, to Smyrna’s 7, and picked up four corner kick opportunities.

Goalie Fabrea McCray made seven saves to pick up another shutout victory.

IR was set to travel to Laurel on Thursday night, May 10, after Coastal Point press time. For a score and highlights from the game, check out our Facebook and Twitter pages.

J.J. Killen drove in five runs on three hits to lead the Indians past Laurel last Thursday afternoon, May 3.

Killen’s offensive day was highlighted by a double, triple and home run.

The Indians scored a 10-spot in the third inning, with Killen, Cole Hitch, Brock Wingate, Tyler Kramer, Kyle Firle and Mark Smith all knocking in runs.

Kris Medford was the beneficiary of all the offense, going four innings while allowing four runs on seven hits, and striking out one. Wingate followed up with an inning of relief on the bump. He allowed two runs on two hits, with two strikeouts.

IR banged out 18 hits overall in the contest. Michael Meehan, Grant Argo and Killen each had three hits, while Hitch and Kramer also had multiple hits on the day.

It took the length of almost two games to get it done, but the Indians prevailed in a 3-2 win over Milford in extra innings on Tuesday, May 8.

Chase Hall earned the win on the mound for the Indians, tossing 5.2 innings of four-hit, shutout baseball. J.J. Killen started on the bump for IR, going 7.1 innings, while allowing six hits and two unearned runs. He would offset two walks with nine strikeouts.

Michael Meehan and Brock Wingate each had three hits, while Meehan added two RBIs for Indian River. Killen and Kyle Firle each chipped in two hits in IR’s 13-hit attack. Grant Argo scored two of the three Indian runs, while Aaron King scored the other.

The wins brought to an end a three-game losing streak for the Indians, which improved their record to 7-6 on the season. IR plays four of their final five games at home, starting with Friday’s game with Sussex Central (4:15 p.m.).

The Indians were going back and forth through the first two games in Monday’s match with the Royals before flipping a switch and steamrolling their guests, 3-1.

Mitch McGee and Michael Barnes led a strong effort from the Indians. McGee had 29 kills, an ace, two blocks, two digs and an assist. Barnes finished with 15 kills, five aces, four blocks, 13 digs and two assists. Alex Canseco Castro had a match-high 36 assists for the Indians. Ian Shaubach had 13 digs, while Porter Palmer chipped in with five kills, an ace, four blocks, three digs and an assist as well.

The win improved the Indians’ season record to 6-1. They were set to close out the season with two more matches this week, both at Delmarva Christian. On Thursday, May 10, they were set to battled St. Mark’s before closing out their inaugural campaign on Friday, May 11, against Salesianum School. Both matches were after Coastal Point press time. For scores and highlights, check out our Facebook and Twitter pages.

Dalton Hall swung the big bat for the Indians on Monday, May 7, with a pair of first-inning home runs, which proved to be more than enough in the rout of Millsboro.

Hall had a two-run HR and a grand slam, to plate six runs in the first inning for Selbyville. He would finish the day 3-for-3 with the six RBIs and two runs scored. Frank Bunting and Colby Willey also had multiple-hit efforts in the contest, with both scoring a pair of runs and Bunting knocking in two.

Reese Stone scored four runs for Selbyville, and Ben Cordrey had a double and two RBIs. Hayden Hall also scored a pair of runs in the contest.

Jamison Bender picked up the win on the bump as he along, with Willey and Hayden Hall, allowed just four hits, with all four runs being unearned.

The win improved Selbyville’s mark to 7-1 on the season. They had one final game scheduled on Wednesday, May 9, after Coastal Point press time. For a score and highlights, check out our Facebook and Twitter pages.