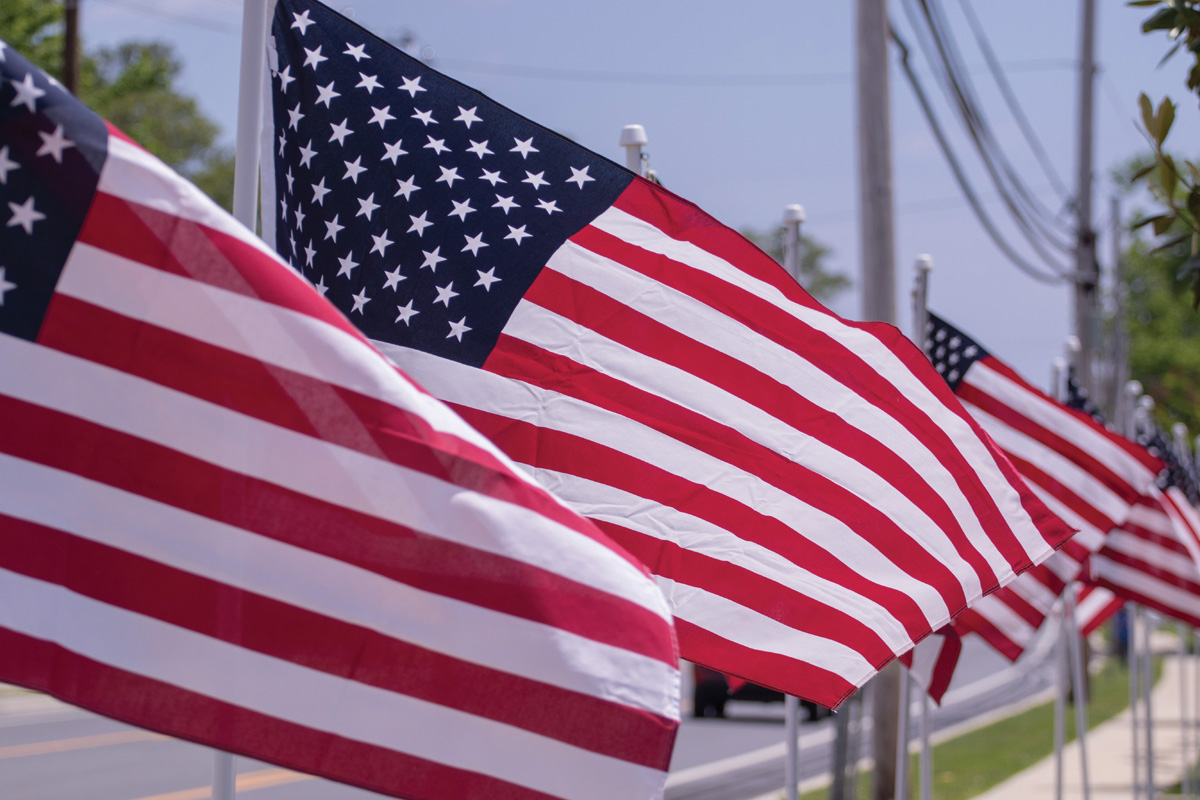 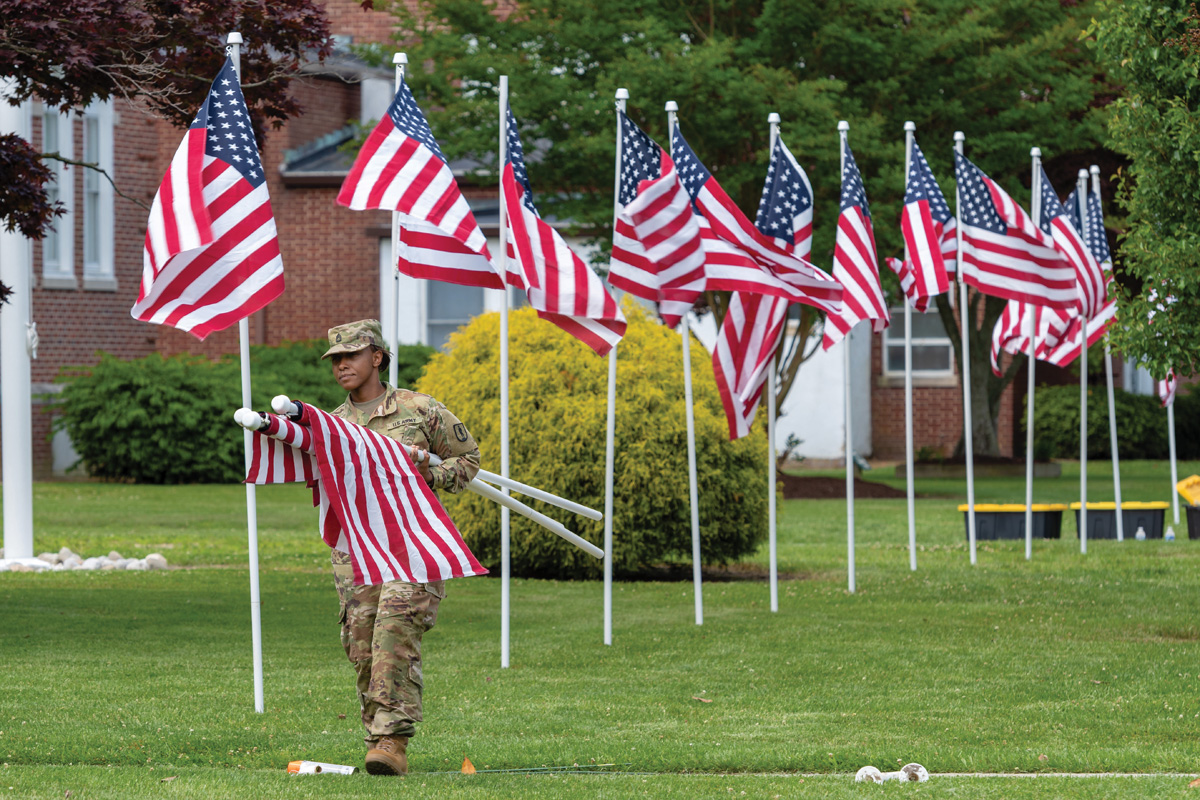 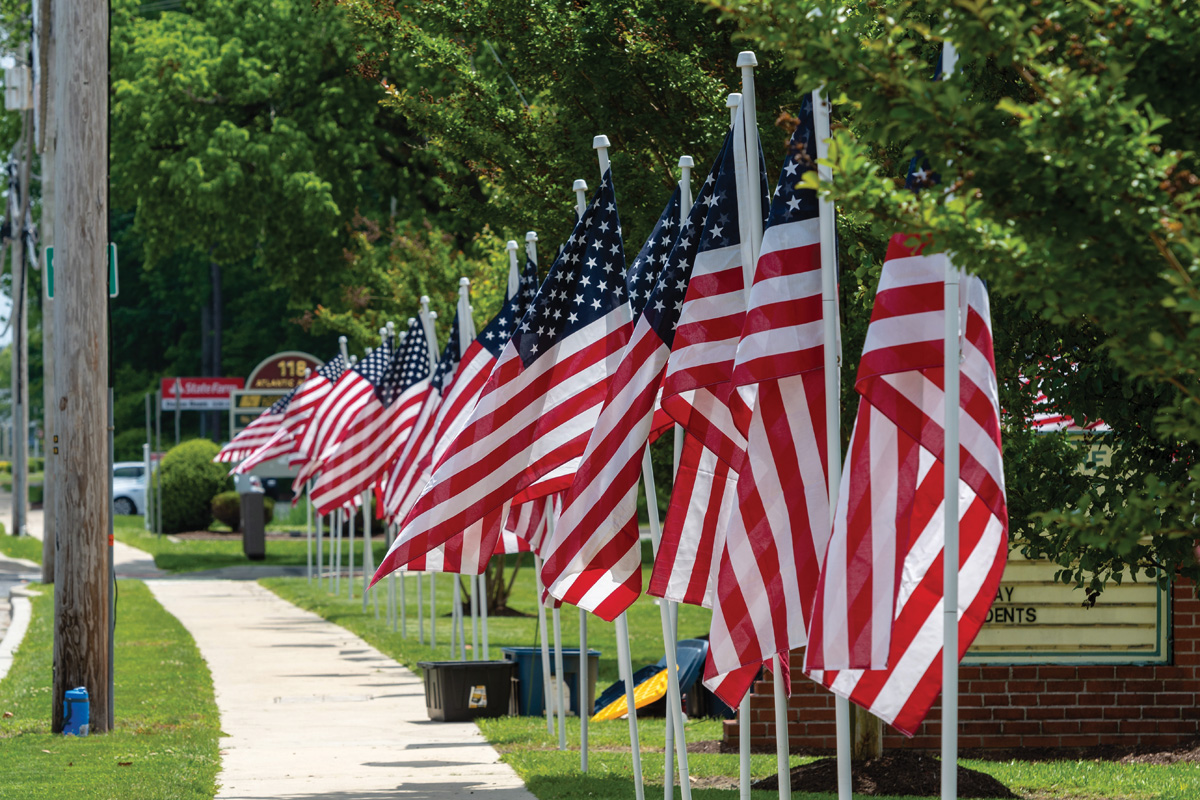 This Monday marks Memorial Day, a day to honor Americans who fell while serving their country in the armed services. To commemorate their ultimate sacrifice, the Southern Sussex Rotary will be holding a ceremony on Saturday, May 26, at 1 p.m. on the lawn of Lord Baltimore Elementary School in Ocean View.

“I just think it’s a great opportunity to start Memorial Day weekend off with honoring people that have served,” said Rotarian Christine McCoy, a past president of the group, which started the local event in 2015. “At the time, also, it was when a lot of police attacks started, so we wanted to include first-responders, so we could include our police officers and anyone who goes out and protects us on a daily basis and puts their lives on the line for us.

“It’s just not those who have passed but those who are serving as well,” she said. “We decided it was a great tribute. When you drive by the displays, it’s a really nice reminder of why we have the weekend.”

Surrounded by waving flags of red, white and blue that have been sponsored with donations honoring those who have served, local politicians, including state Sen. Gerald Hocker, Rep. Ron Gray and County Councilman Rob Arlett will be reading the names of the heroes whom the flags represent.

“Words can’t express how honored we are to do it,” said incoming Southern Sussex Rotary President Scott Smith, who is also retired from the U.S. Army. “When I was active duty, we did Memorial Day, we did the honor guard — but this is a very special time for me, with honoring the fallen, memorializing the folks who have fought ahead of me and will fight behind me.

“Just being a veteran, Memorial Day is a special time, whether the folks that are honored have been lost during combat or lived their lives but are now deceased,” he said. “It’s just a time to remember them and give thanks back to all those who served and their families.”

Those who attend this year will also hear from Brig. Gen. Kenneth “Ed” Brandt of the U.S. Army National Guard.

“We did serve together,” said Scott of Brandt, noting that they were deployed together on two separate tours. “He is the chaplain of chaplains for the Army National Guard. He was a very good spiritual leader while facing adversity in a foreign country, whether it being combat or being away from family. He was very good with soldiers, and I think a lot of him. I asked him, and he said, ‘What time, and where do you need me?’”

The Indian River High School band ensemble and the JROTC will also be in attendance.

The ceremony is open to all, and the Southern Sussex Rotarians are hoping to draw even more interest from the community than in the prior three years of the event.

“We usually get 40 to 50 people. Of course we would like it to be bigger,” said McCoy. “It’s probably a half an hour to 45 minutes — just getting the weekend started in the right frame of mind. We’d like to get the event more well-attended. It’s not just for the people who sponsored flags. Everybody is invited to celebrate our heroes with us.”

“The ceremony is open to all. I’d love to get more of the veterans to come out,” said Smith, noting that he’d love to see some fellow veterans from area VFW and American Legion posts attend. “It’s open to all. I know how I feel as a veteran. If they could be a part of it, if they knew about it, I’m sure they would be.”

Along with the flags at L.B., flags will also be flying at Mountaire in Selbyville and Blades HVAC in Dagsboro, all of which the two local National Guard units helped place.

“I just think it raises awareness of what the weekend is about and reminds people to honor those who are serving,” said McCoy of the fundraiser.

“It’s personal, because I still honor the brothers and sisters that still continue to fight, the ones before me and the ones after. It’s important to me because I love my country,” Smith added.

Each flag represents an individual its sponsor wishes to honor as a hero.

“It’s been very well received. We’ve asked for flag sponsors, and we have corporate sponsors and individual sponsors. People have hunted us down, trying to find a way to get involved and sponsor flags,” said McCoy.

“I would say more than half of our flags are repeat sponsors — they just like to honor those in their lives who have done great service to our country. It’s really cool, because the community has embraced it. If you ask now, ‘Have you seen the flags at Lord Baltimore?’ — and we have another section out on [Route] 113 — everyone says, ‘Oh, yeah! We saw that last year. We didn’t know it was you guys.’”

Last year, 200 flags were sponsored and more than $8,000 was raised in honor of veterans, current service members and local first-responders. Proceeds were donated to the Dagsboro Botanical Gardens, to honor Rotarian Ferdinand Comolli, to Operation Seas the Day, to Easter Seals’ Camp Fairlee, to the Delaware National Guard and to Rotary’s “End Polio Now” campaign.

In 2018, the funds raised will support a Milton family through Operation Finally Home, a national, non-profit organization dedicated to building homes for wounded, ill or injured veterans, and their families.

Those who attend Saturday’s event may also learn how to get involved in Flags for Heroes next year.

Flags for Heroes isn’t the only fundraising program the Southern Sussex Rotary holds annually. The End Polio Now campaign is another focus for the group. “We educate and equip communities to stop the spread of life-threatening diseases.”

The organization also sponsors the Selbyville Christmas Parade and does a great deal of outreach in schools.

“We’re very focused on the school system as well. We do a lot for the high school. We do dictionaries and a spelling bee for third-graders. We have an ‘Interact Club’ at the high school now,” said McCoy.

“We do a lot of really cool events. We’re all very active. We come up with new ideas all the time, and we can implement what we want to implement at the club. We have a passion for giving back to the local community and helping people learn how they can serve the community as well.”

The club meets every Thursday morning at 7:30 a.m. at Brandywine Assisted Living in West Fenwick, and currently has 16 active members.

“We’re always looking for professionals, active or retired, to join our club. We’re little, but we’re mighty,” she said.

McCoy said she joined the Rotary Club because she felt a need to serve her community. She said she hopes others will feel moved to do the same and join their team.

“Then you end up becoming really good friends with the people you’re serving the community with. We have a lot of fun at the events together, and it just keeps it going. You join for one reason, and then you end up staying, really, because you have so much fun doing it and the people are just incredible. We all have a common mission.”