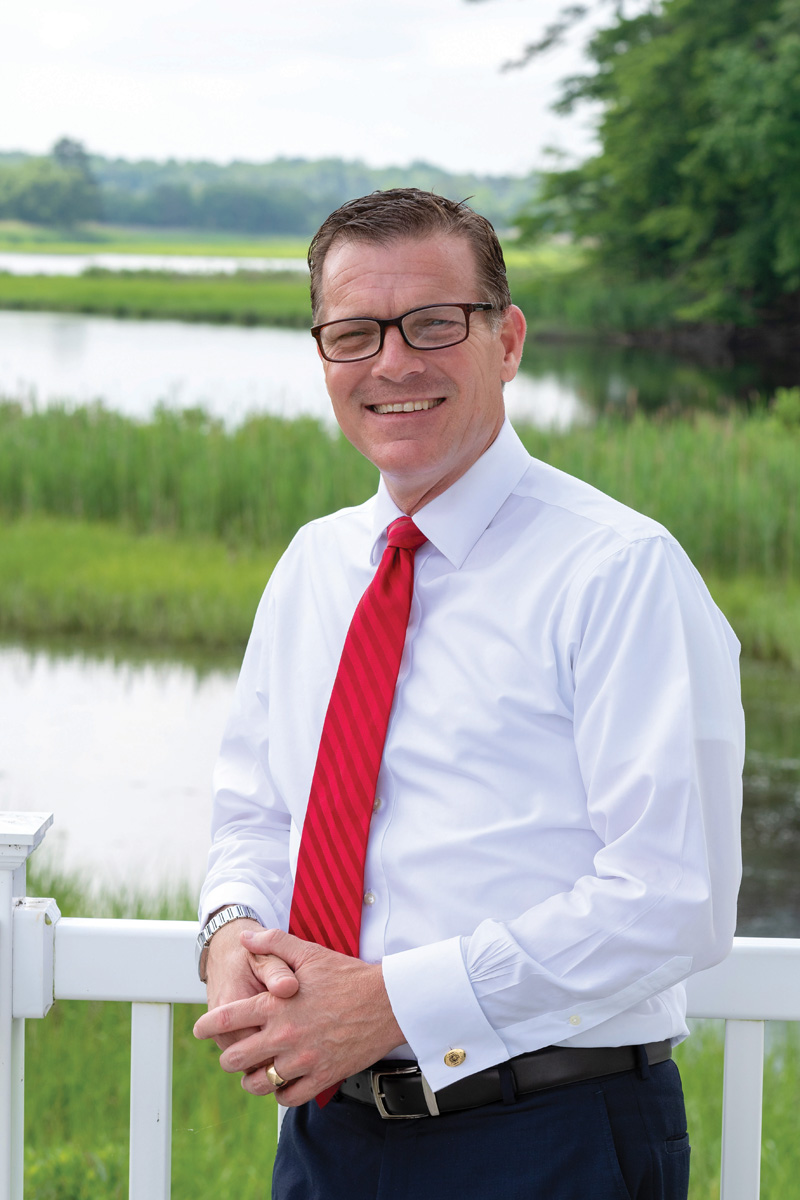 Arlett throwing his hat into the U.S. Senate ring

While the end of his term on the Sussex County Council is nearing an end, District 5 Councilman Rob Arlett has no plans to leave public service.

In April, Arlett —a registered Republican — officially announced his bid for U.S. Senate.

“I have traveled up and down our state for, really, three years. I think there’s probably very few people, if anybody, who has traveled our roads perhaps more than I over the grassroots over the last three years,” he said. “After the last presidential election in 2016, soon thereafter, many people up and down the state were very encouraging of me to run for a statewide office, a federal office.”

Arlett said the decision to run was ultimately a family decision — after having lengthy discussions with Lorna, his wife of 28 years, and his sons Jared and Justin.

“People want change. People desire change in Delaware. That’s the message. They were seeking for me to be that agent of change,” he said. “My focus is to represent Delaware at the national level and place a focus back on Delaware. I want to put the First State first.

“The question I have is, ‘Who is Delaware today?’ If we’re losing jobs, if we’re losing our kids, if we’re not bringing industry here, then what are we doing? As an elected official, my responsibility is to put Delaware first.”

Arlett moved to Sussex County in 2005 from Virginia and opened Beach Bound Realty. He had previously attended George Mason University and served in the U.S. Navy Reserve as an intelligence specialist. In 2015, he was elected to the county council, and he also served as Donald Trump’s Delaware state campaign chairman during the 2016 presidential election.

One area of focus for Arlett, if elected, he said, would be to work to improve Delaware’s economy.

“Our economy is still struggling in our state as compared to the national averages. It has been stated … that our state was ranked 50 out of 51 in economies. That’s unacceptable. A .9 percent growth rate in our GDP is unacceptable,” he said. “We want to bring jobs back here to Delaware,”Arlett said, noting that, as an elected official, he loses sleep over the state of the economy.

Keeping families together, while bringing jobs back to the state, is also an area he hopes to focus on.

“The No. 1 focus for me is to bring opportunities and jobs back to Delaware and keep our families together. As a father who has two kids who no longer live here … many people in our state are educated here and then they leave because there’s little to no opportunities for them,” he said.

Arlett said he also hopes to bring change to healthcare, calling the current state of healthcare in America a “debacle.”

“Right now Delaware has one [healthcare provider]. That is unacceptable for our families and residents in the state of Delaware that we have one! Premiums have greatly increased, to the point where it is a major financial burden.”

“The Affordable Care Act has not been what it was promised to be,” he said, adding, “There were some good things with the Affordable Care Act that I support and encourage. I’m not somebody who is totally against it because it was forced on the American people. I was agreeable to raising the age limit on the family plans to the age of 26.

To continue that conversation, Arlett will host a healthcare reform town hall on June 19 at 7 p.m. at the Word of Life Christian Center in Newark.

“That’s what we’re going to bring. We’re going to bring action and results, and not just talk and partisan politics. That’s why we’re having the workshop. We’re very excited to bring this dialog to the forefront and have a dialog in our state regarding healthcare. I look forward to the conversation as a state, and as a community, to learn together how we can improve healthcare, because we have to.”

While he will not hold a healthcare town hall in Southern Delaware, Arlett said the Newark forum is one of many forums being held throughout the state.

Arlett: More needs to be done for veterans

Another area Arlett said he hopes to work on at the national level is that of veteran care.

“I’m very passionate about the military, as a veteran, as the son of a veteran — a military career officer — as the father of a veteran, as a sibling of a veteran… We have let down our military, our veterans and their families,” he said. “I would suggest we bring the [Department of Veterans Affairs] back in, within the Department of Defense, and not as a separate agency, because right now it is a separate thought. Once you raise the right hand, the commitment from our country should be forever.

“The way it is set up today, it is an afterthought and not a priority. The military has always had the mindset that today’s mission is the most important — to support and defend our country — and I applaud that mission. If it were a part of the [Department of Defense] they would remain a priority and it would not be an afterthought… I think that is the first step. They are part of our mission.”

Arlett said many veterans are prideful, and do not typically want help or believe they need help. And while he acknowledged there are resources for veterans, he said he believes more needs to be done.

“We need to have a required mentoring program. The way it works today is, when someone exits the military, they basically go through a weeklong process. Once they’re done, it’s basically, ‘Good luck, have a great life.’ That’s a problem.”

Tying both healthcare and veterans affairs together, Arlett said the government needs to consider its stance on natural medicines, such as medical marijuana — especially given the opioid epidemic overtaking the nation.

Calling on his own personal experiences, Arlett said his own mother was ill for many years and ended up becoming addicted to pain medications.

“If there is a natural remedy that does not have the same side effects, that are not as addictive, then we must look at those as alternative options. If it’s good enough for what we eat, why wouldn’t it be OK for us to consider those for pain relief options?

“Right now, our military, at the national level, considers marijuana a Class One felony. Therefore, our veterans have no options for natural remedies. They’re forced to use the synthetic options that are highly addictive and highly problematic.

“I would petition the need to remove that hurdle, for not just our veterans but all Americans. We need to look beyond our normal way of doing business, because it’s not acceptable. We should look at alternative options that provide the same relief for pain but not as harmful with side effects.”

Adding that he is supportive of the agricultural community in the state, Arlett said he would also seek to be an advocate for agro-business.

“That topic of conversation will continue in our campaign. I believe the federal government should be serving the American people, versus demanding the American people serve them, by way of taxation and regulation. We are to be servants to Delawareans, and not just lip-service, but action. That’s something that I’m very passionate about and very excited to do.”

Arlett said he has received a great deal of support throughout the state, for which he said he is thankful.

“We’re attracting interest, support and endorsements across all party lines, all ethnicities, all demographics. This is a campaign about the people and not party politics,” he said. “We continue to add volunteers; we continue to add people that are financially supporting our campaign on a daily basis throughout the state of Delaware.”

Arlett said he will not stick strictly to party lines, if elected, but rather serve the people of the state.

“I think people in Sussex County probably know me best about that — I’m not a party guy, as evidence from my tenure on county council. I will not be influenced by party politics. I will vote for the people of Delaware and not political partisanship. That’s what’s missing in Washington, D.C.,” he said, noting discourse between political parties.

“It is a sad state in our country that, whoever is the president, the opposition party that is sitting in those seats in Congress will not stand and applaud for the American people. They will only stand and applaud their political party. I will stand for the Delaware people and the American people every time, no matter who is the sitting president.

As of Coastal Point’s June 6 deadline, Arlett had not officially filed to run for the U.S. Senate or for County Council — two offices for which he could legally run simultaneously.

Arlett also made note that going from county council to the U.S. Senate is a natural progression, given that was the path taken by U.S. Sen. Chris Coons and former U.S. Sen. and Vice-President Joe Biden.

“I understand the needs of the people because I am one of them. We are a normal person with normal successes and normal challenges, like many other Delawareans,” he said, adding that he is not a politician who was born with a silver spoon, but rather “raised with a plastic spoon.” “I think many people would relate to that,” he said.

Arlett said he looks forward to serving the people of Delaware and bringing focus back to the state.

“I think it’s about time we have representation from Delaware in Washington, D.C., who understands the average individual, because I am one. That’s why I am most qualified, because I get it,” he said. “The status quo is just not acceptable anymore. We need leadership and we need courage. We’re going to bring that leadership and courage to Washington, D.C .I would be honored and humbled to represent this great state in our nation, and bring pride back to Delaware.”