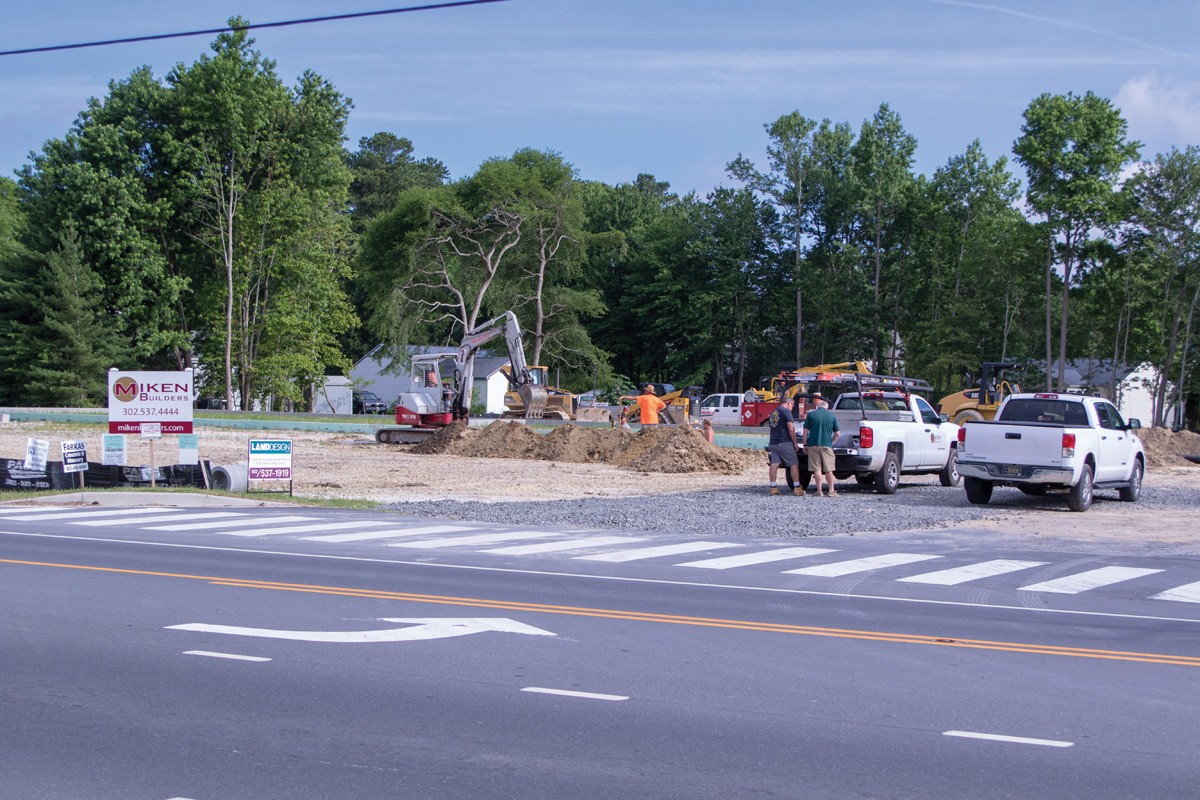 With heavy rainfall this spring, many saw the effects of Mother Nature, with fields flooding and swales overflowing.

Such was the case with the property of C.J. Pines in Ocean View. The 3.37-acre property, located at 83 Atlantic Avenue (Route 26) is undergoing construction of the structures for a restaurant and office/retail space.

While the property is protected by silt fence that has been constructed in accordance with the Sussex Conservation District’s requirements (even including super-silt fence along the back side of the property) the project had issues during the heavy rains with silt leaching.

“We have those things in place,” said property owner Russell Archut, who is also developing the site. “That doesn’t mean that some silt doesn’t get off the site.”

With a particularly heavy rainfall in May, concerned neighbors contacted the Town of Ocean View and the Sussex Conservation District after noticing silt in the ditch on Hudson Avenue.

“Water does leach through the silt fence, and I’m sure there’s places where it may be passing under it when we’ve had these torrential rains,” he said. “At one point, because we had so much water on the site, we were contacted by the Town about their concern of the water on the site and silt running off. I contacted our stormwater consultant and asked them is there anything I can be doing?

“They pointed out to me that on the plans, there’s a statement here that says, ‘prior to outfall structure and pipe installation, if trap is not dry within 48 hours after the rain event, use a dewatering bag and pump to drain.’ They pointed out this was one option, so I directed my contractor to perform this operation. The purpose of it — that’s my understanding — you empty the pond so that when the next rain event comes it’ll contain all the silt from the runoff at that time.”

While Archut said he believed he was responding appropriately to the concerns, as directed by his consultant, due to the heavy rainfall, the water had so much silt in it that it was being discharged into the ditch and going downstream.

Archut said that once it was noticed, they stopped the operation and have not performed it since.

The discharge was reported to the Sussex Conservation District, which issued a notice of violation for dewatering without proper controls, having sediment leave the site via runoff, not complying with the sequence of construction and dewatering without approval from the District inspector resulting in sediment laden discharge.

The Sussex Conservation District requested that Ocean View stop construction on the site until it could be brought into compliance, which the Town did, issuing a stop-work order for the construction of the building on site.

Archut said that because the dewatering practice had been noted on the plans, which had been approved by Sussex Conservation District, he felt it was an acceptable response to the rainfall.

Jessica Watson of the Sussex Conservation District said part of the problem was that, while the developer was waiting for an outfall structure to arrive and be installed for stormwater management during construction, there was significant rainfall.

“Part of their construction plan has a stormwater management plan,” she explained. “They have sediment and erosion controls for when the site is under construction and also permanent stormwater facility. Right now, we’re in a temporary configuration.”

She also noted that many temporary stormwater management plans are designed for 1 inch of rainfall.

“When you have 4 inches of rainfall… you can’t capture everything.”

Once the rains had begun, though, the temporary outfall structures to address the rainfall on the site could not be installed, due to the ground being so saturated. Archut noted that, on June 9, an additional 4.5 inches of rain fell.

As of last week, all the in-ground stormwater controls were in place, with a temporary berm that will be replaced with a permanent retaining wall along the northwest corner of the stormwater pond, and a second catch basin has been installed on Woodland. The temporary outfall structure, including a skimmer, has also been installed.

“That will alleviate the silt problem to a certain extent,” said Archut. “It’s not going to alleviate everything until we get some cover on the site.”

Archut said the site work was to have been completed June 13, according to the construction schedule they received in January.

“But we had four coastal storms in January. Then we had about a three-week dry spell… Now that date is Aug. 14. So, it’s almost exactly two months we’ve lost because of the rain.

“That’s to get the site work done — that doesn’t include the building, which is obviously going to lag behind that.”

Archut also said outside factors affected the project greatly, including the State removing two catch basins on Woodland Avenue, adjacent to the property, during the Route 26 improvements project.

Another issue was neighboring properties had in the past had their stormwater draining onto the Archut property.

“We’ve handled their water for all these years. Now, we’re obligated to put a drainage pipe along the property line, create a drainage swale along our property to take their stormwater off. We don’t have to manage it on our site, but we have to [install] 155 feet of 12-inch pipe.”

In addressing concerns that damage may have been done due to the silt leeching, Watson said her office did not believe the amount of silt that left the property was of great concern.

“It wasn’t like elevations changed,” she said. “I don’t think we had that much sedimentation. We have to move forward and make sure this doesn’t happen again.”

She added that if the Conservation District were to address a great deal of sediment leaving a property, it would likely require excavating some or all of the ditch, of which she said, “Doing some type of effort like that would do more harm than good.”

Both Watson and Town officials said Archut has been fully cooperating with officials to correct the issue.

“We’re trying to communicate to all the neighbors out there where we are in the process,” said Watson. “Now we’re going to work hard to get the site stabilized.”