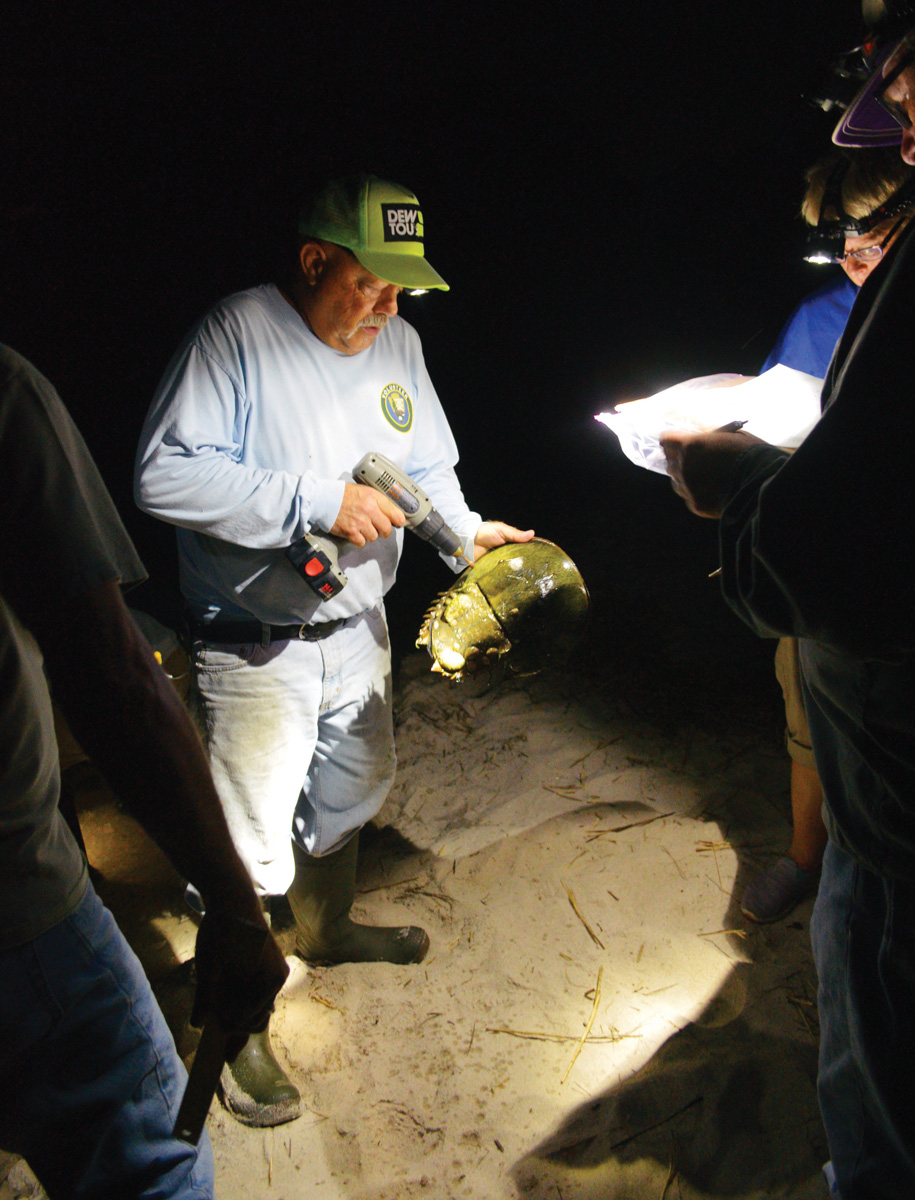 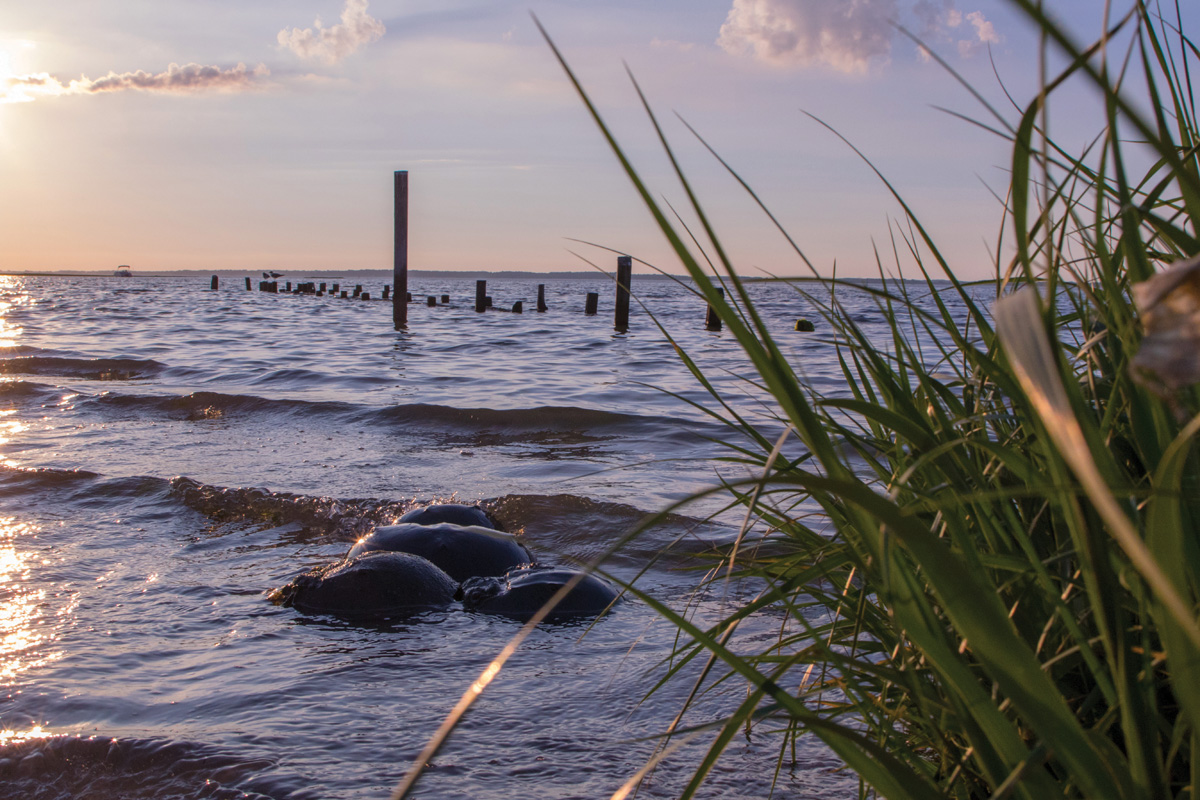 Under a full moon in June, about a dozen people strapped headlamps to their foreheads, grabbed clipboards and hiked to the waterfront at James Farm. They would be counting and tagging horseshoe crabs until nearly midnight, as the crabs came ashore for mating season.

The Indian River Bay gently nudged at the long sandy beach, hidden outside Ocean View. Horseshoe crabs were already nudging together in groups and pairs, under the shallow waves.

“We have to be there as the high tide starts to recede,” explained Dennis Bartow, biologist and lead survey coordinator. “That’s the official counting time that’s consistent with all the sites along the Delaware Bay.”

One by one, the tagging team pulled an endless parade of horseshoe crabs from the water. They recorded the sex and approximate age on a clipboard, and then drilled a hole in the corner of their shells to attach a round white numbered tag. Then they tossed the crabs back into the bay, without ceremony. (The crabs can probably handle it. They’ve probably survived worse than humans in their several million years on earth.)

“We don’t disturb any nesting ones, but anything that’s moving is fair game,” Bartow said, wading in the water around 11 p.m.

Meanwhile, the counting team did a random sampling along 200 meters of beach, counting crabs every few meters.

Although the males clung onto the females’ backs, they don’t actually mate in the mammalian sense. Instead, the female lays her eggs deep, digging into the sand with her sharp tail. The male (sometimes more than one) is pulled right behind her to fertilize the newly laid eggs.

Over 40 days, the babies mature in the shell and come to the surface. The survivors slowly make their way into the bay, trying to avoid fish and the generations of shorebirds that have built their migrations around this all-you-can-eat crabby buffet.

The Delaware Center for the Inland Bays (CIB) has been counting crabs since 2008, this year with six sample sites around the bays.

They aim to count 15 times from late April to June, always at the full moon or new moon, plus two days before and two days after.

They’re tracking crabs around the Delaware Bay, Ocean City, Md., and Wallops Island, Va., up to Connecticut and south to the Carolinas.

On this night, volunteers counted 267 crabs, including 210 males and 57 females.

On some nights, they see fewer than 10 crabs at James Farm. On their highest nights, they averaged in the 700s, topping out at 1,059. There are usually way more males than females. On the busiest nights, the males can outnumber females roughly 9:1, although 5:1 is more common.

Once the baby crabs have hatched and made their way back into the water, they’ll have about 18 molts in 10 years, and then the mature crabs will return to the shallows to begin reproducing.

Horseshoe crab species come in three Asian varieties, plus the one American version found on the East Coast from Maine to Florida and the Gulf of Mexico.

While they’re called “crabs,” the American horseshoe crab, or Limulus polyphemus, is actually closely related to spiders and scorpions. But these gentle monsters are nothing to be squeamish about.

“They cannot hurt you. They have a lot of claws” that aren’t hard enough to puncture skin, Bartow said, as a crab clung to his hand like a baby monkey.

The tail isn’t poisonous, only sharp enough to startle bare feet, like anything else hidden in the sand. With no teeth, they enjoy eating small clams and worms.

Just don’t get any fingers caught in the shell hinges as the creature bends its abdomen.

In their 21-year lifespan, their death can be important, ecologically and scientifically. The eggs fuel shorebirds that migrate from the southern tip of South America and Africa to the Arctic. As a baitfish, horseshoe crabs are popular bait for whelk and eel.

Finally, the famous cornflower-blue blood of horseshoe crabs has not been duplicated in the laboratory, and it’s the only known substance that can test for bacterial contamination in drugs, vaccines and medical devices, such as pacemakers and prosthetics.

Bartow explained that limulus amebocyte lysate (LAL) is extracted from the blood, then rehydrated in laboratory tests. If it remains a liquid, things are good. But if the LAL reacts to form a gel, the substance is contaminated.

“There’s no synthetic substitute for it,” Bartow marveled.

“They’re been around for [over 400] million years. They’re survived five major extinctions. They outlived the dinosaurs. … Hopefully, they continue,” if humans don’t ruin their homes, Bartow said.

How have they survived for so long?

“They have a specialized area they live and feed on,” Bartow said.

With a low profile and hard shell that has inspired generations of battle-bots and Roombas, the horseshoe crab lays low in deep, warm waters in winter.

And yet, spawning grounds must be precise: a certain slope of sandy coastline that drains back with just enough moisture.

The female will lay a million eggs in her lifetime (80,000 to 90,000 eggs each year), in clusters of several thousand light green or orange BB-sized balls. Of those, 55 will survive to age 2, when they’re about 4 inches. (In the Southern states, their timelines are a bit faster and shorter, where warm temperatures speed things up.) The lucky ones live about 21 years in this temperate zone.

The male bumps along the dark seafloor, attempting to mount anything in the way, including rubber boots. Crabs have 10 eyes, or light sensors, including the main pair on top (which look like traditional eyes), plus more on top, underneath and on the tail itself.

To the untrained eye, the males and females look nearly identical. But the front lip of the male’s shell is slightly bowed, to fit over the female’s abdomen, which is more curved. He climbs on the back of her shell and hangs on with two front pincers.

Females are usually larger, since they can live longer and have an additional molt.

Their age can be determined by size, color and condition of a shell. Like many other seafaring vessels, the crab shells collect barnacles, slipper shells, worm tubes and algae.

The tag data is also sent to the U.S. Department of Fish & Wildlife. This summer, at least 800 crabs had already been tagged at James Farm, plus another hundred or so on this warm June night.

Based on density, it turns out that the inland bays are almost as important for the crabs as the larger Delaware Bay, which is world-renowned for its horseshoe crab activity. (Prime Hook during birding season, anyone?)

But as long as horseshoe crabs show up, the CIB volunteers will keep counting. They have fun, joking and laughing amid the work. Some have been counting since the beginning, while others just joined this spring after hearing a lecture.

For more information or to volunteer for the CIB’s 2019 spring surveys, email environment@inlandbays.org or call (302) 226-8105, ext. 112. Details are online at www.inlandbays.org/projects-and-issues/all/horseshoe-crab-survey.