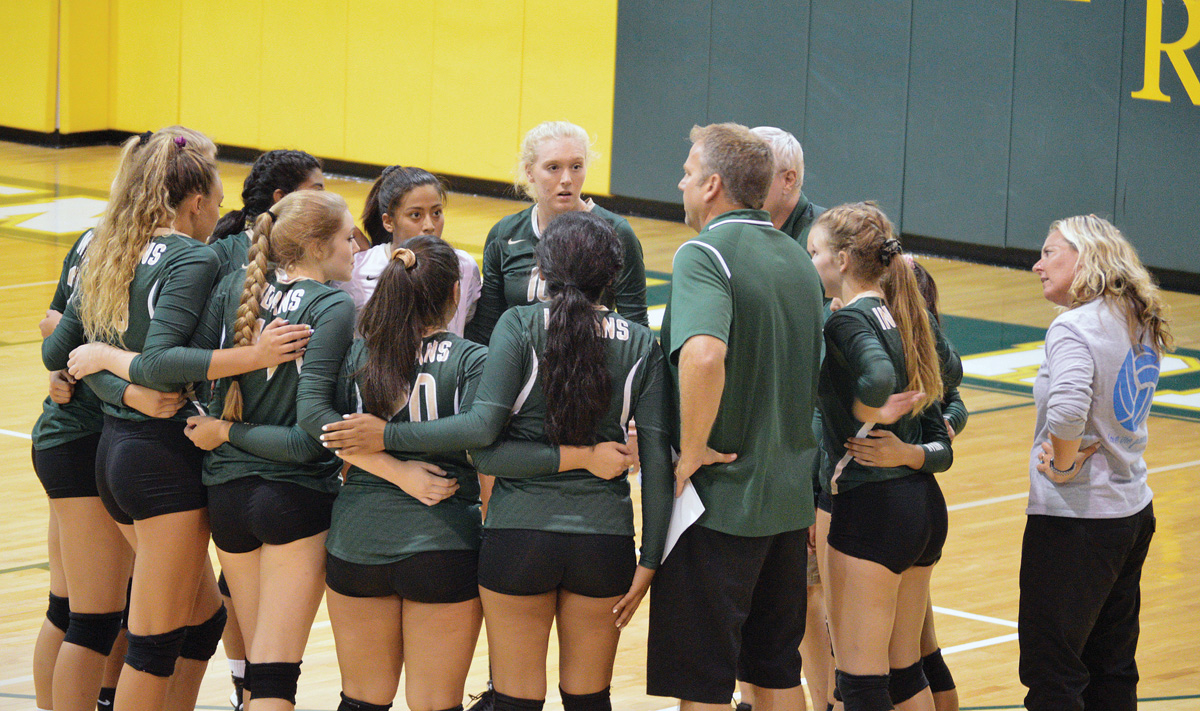 With a team that consists of only juniors and sophomores, it wouldn’t be a stretch to think that there was the off-chance there could be some concern going into a sports season — especially a year after going 14-1 in the regular season.

But when it comes to the Indian River High School girls’ volleyball team, anyone thinking that had better think again…

The 2018 team is not concerned about any perceived senior leadership issues. Despite the noted lack of seniors, this squad is loaded with experienced and talented players up and down the roster. That talent was on display in their first two matches of the season this past week.

“I was very happy with what I saw from the girls,” head coach Jim Barnes said of the game last Friday. “They did exactly what we’ve asked them to do and executed. I think we are comfortable with our lineup, which we have not been. We’ve been trying to figure out where to put the girls to best use their talents, and where they feel most comfortable.

“I just know we are not gonna surprise anybody anymore. I don’t believe so. I think everybody is gonna be ready for us, and next Tuesday is going to be an exciting match.”

It was a total team effort from start to finish for the Indians on Sept. 7, with a trio of juniors leading the way.

Marianni Chavez posted a stat line of one kill, two aces, one dig and 12 assists. Raychel Ehlers added 11 kills to go with a pair of aces. Jessica Amezcua drilled a match-high seven aces for IR.

“I think it gives us confidence to know that we are good enough to beat teams,” said Amezcua of the win over the Mallards. “We know we that we can play together. We know we are good at our positions. We just have to trust our teammates, and everyone knows what they are doing. We have to stay positive and keep the momentum up.”

Sophomore Nicole Woody chipped in with two aces and six assists. Junior Siera Johnson picked up a kill and four aces as well, while sophomore Skylar Kneller was credited with four kills and three aces.

All told, the Indians recorded 22 kills and 24 aces in the contest with the Mallards.

On Tuesday night’s match with Caesar Rodney, the Indians wound up with a heartbreaking 3-2 setback versus the Riders.

Ehlers posted 28 kills to go along with one block and 10 digs. Amezcua added two aces and 14 digs, while Chavez contributed two kills, two digs and an incredible 37 assists.

The disappointing loss for IR proved to be a small slice of revenge for Caesar Rodney, after the Indians had taken out the Riders last year, 3-2.

IR had little time to dwell on the results of the Sept. 11 game, as they were set to be back at it again on Thursday, Sept. 14, with a match against Delmar, after Coastal Point press time. Results can be found on the Coastal Point sports Facebook and Twitter pages.