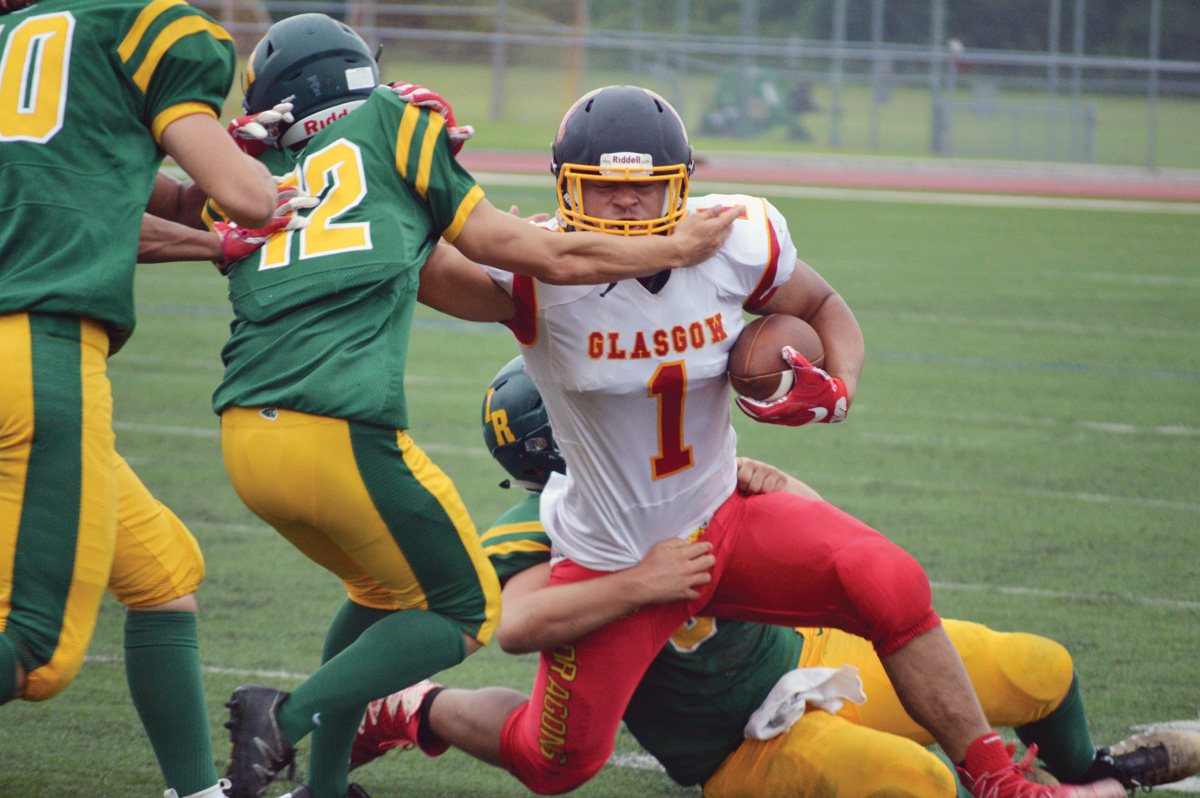 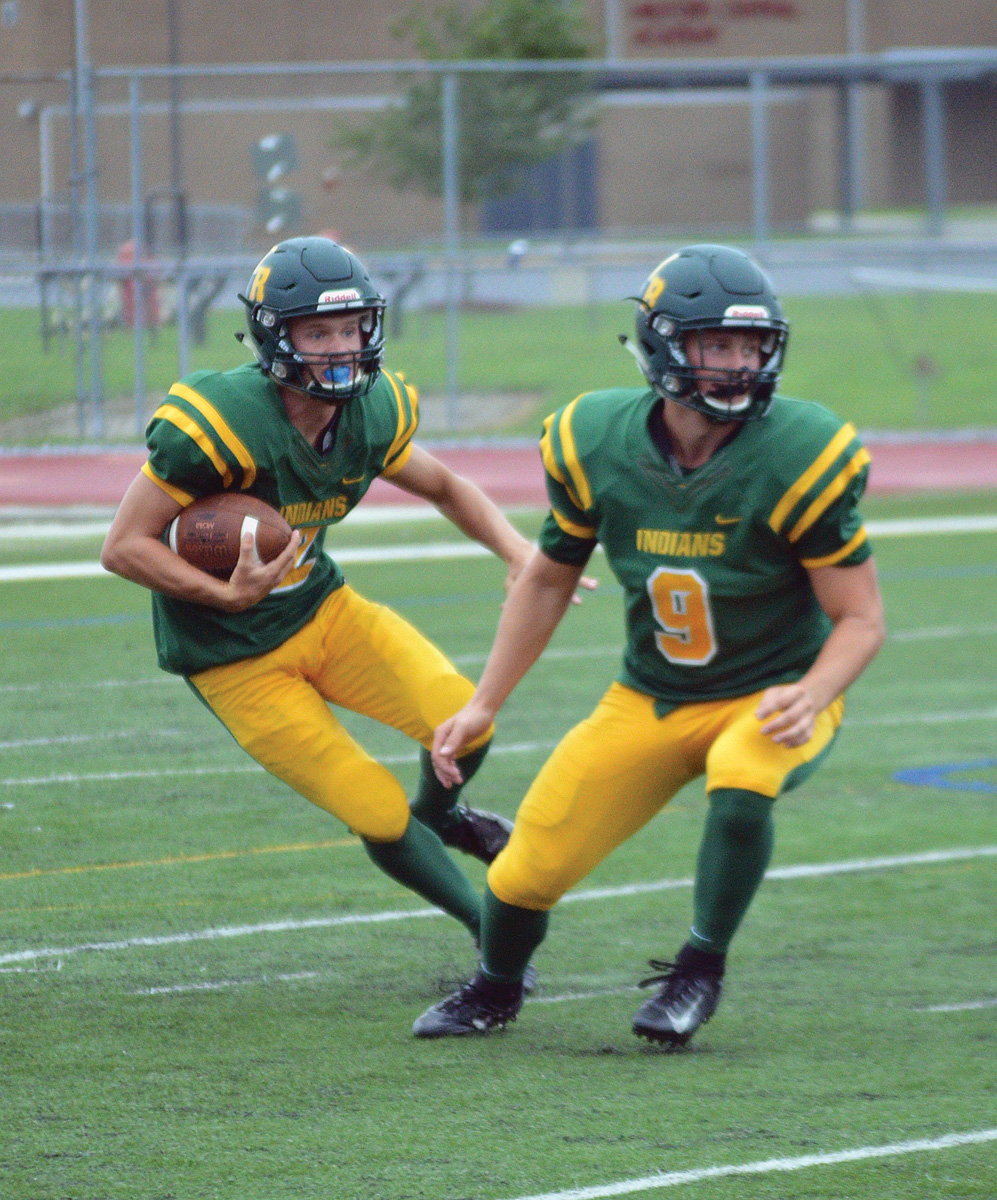 Much like in life, one has to deal with adversity in sports as well, and how people respond to that adversity can go a long way toward determining success or failure.

With their opening game against Glasgow postponed last Friday night, Sept. 7, due to severe weather, and with the threat of more heavy rains for the area on Saturday, Sept. 8, the Indian River High School football team was forced to give up their planned home game for a neutral site at Milford, on the turf, just to ensure they could play.

But those adverse situations weren’t the last of it. During the second quarter, starting quarterback Ian Shaner left the game with an injury, forcing sophomore quarterback Tyler Bowen into action.

He performed rather respectably as well, leading the Indians to a 16-12 come-from-behind win over the Dragons.

“I feel great about this win for our team, and proud of my offensive for helping me out there,” Bowen said after the game. “I was ready to go, but you never know what can happen. You always have to be ready.

“It’s a big win for us,” he noted. “We beat them (Glasgow) last year in the same situation. We just have to keep our heads up and get prepared for next week.”

Bowen finished the game 4-for-9 for 61 yards, with a touchdown and an interception. The touchdown pass was a perfectly placed ball to senior wideout J.J. Killen for 21 yards, with just 31 seconds left in the first half.

“The focus of the coaching staff this year was not to focus on 11, but to focus on the whole team,” head coach Phillip Townsend said after the game. “Tyler has done a good job of taking reps when Ian gives him some time in practice. There was a couple times when he looked like a deer in headlights a little bit, but he persevered and came through when we really needed him.”

That score erased a 6-2 deficit for the Indians after Glasgow had taken an initial 6-0 lead through the first quarter, on a Naiseem Butts score from 30 yards out.

IR had gotten on the board earlier in the second quarter, when Jodiah Morris and Ramond Turner had met each other at Glasgow quarterback Phillip Adams in the end zone, for a sack and 2-point safety.

Glasgow came out after the halftime break with Ni Isaiah Carter’s 30-yard dash, to punch another score on the board and take a 12-8 lead on the Indians.

However, IR’s Reshawn Turner scampered 8 yards off the left side for the go-ahead and eventual game-winning touchdown, with 1:04 left in the third quarter.

“First game, a couple miscues, gonna make some mistakes — especially with the elements being what they were,” Townsend added. “But, again — first game. We came out on top. We persevered and were able take advantage of some things. I think Glasgow got a little flat there in the third quarter, going into the fourth. My guys stepped up and really played four quarters.”

Killen finished the game with three catches for 45 yards and the touchdown. Jacob Anderson hauled in two passes for 32 yards, and Adam Bordeau added one catch for 3 yards.

Turner was the leading rusher for the Indians, covering 76 yards on 22 totes, with the score. Anderson also picked up 46 yards on six carries.

IR capped the scoring with a second safety in the fourth quarter, when Adams was called for intentional grounding in the end zone.

The Indians were originally scheduled to play Polytech this Friday, Sept. 14, but the threat of heavy rains — and with both teams having just placed new sod on their football stadiums — forced the schools to make other arrangements. As of press time, an exact time and location for the game had not been confirmed. Check out the Coastal Point sports Facebook and Twitter pages for that information, which we will share as soon as we get it.

“From day one this year, these kids have been focused,” Townsend, who saw his offense finish with 221 yards of total offense, wrapped up. “Like I told them, I felt like they had our backs as a coaching staff coming into this game, and they’ve allowed us to prepare them for this game.

Extra points — Defensively, IR held the Dragons to just 120 yards of total offense (106 of those yards came on the ground). The Indians were led by Zach Schultz’s eight tackles. JaQuan Floyd chipped in with seven tackles of his own, to go with the team’s other sack. T.J. Moore was credited with six tackles on the day as well. Glasgow was penalized 20 times for 170 yards, while the Indians were called for five penalties for 45 yards.