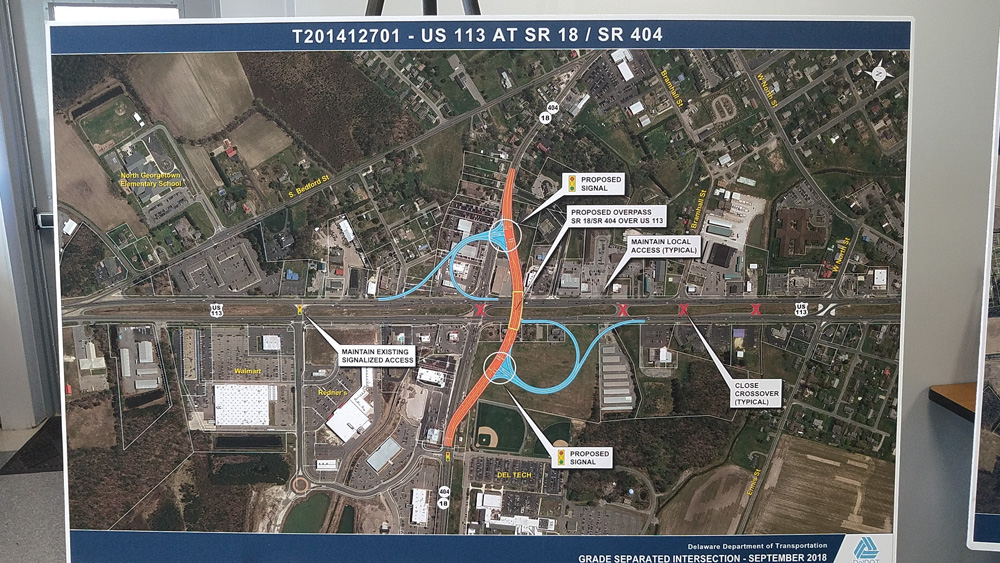 Route 113/24 changes among DelDOT plans for next five years

Each year, the Delaware Department of Transportation (DelDOT) announces its proposed road projects for the next six years. This autumn, DelDOT showed off their plans and sought public input on the proposed Capital Transportation Program (CTP) for the 2020-2025 fiscal years.

Public hearings were held in each county, including Sept. 26 in Georgetown.

“We’re always looking for folks in the community to help us gain a better understanding of how the system is working,” said Drew Boyce, director of planning.

They’re working with a $907.5 million budget for the 2019 fiscal year, which includes all tolls, DMV fees, federal funds and more.

DelDOT is planning a series of overpasses to improve traffic flow and safety on Route 113. DelDOT has announced the “preferred alternative” for the intersection at Routes 113/18 near Delaware Technical Community College.

After presenting several options to the public in early 2018, DelDOT is working toward installing on-ramps northeast and southwest of the intersection.

Of the alternatives, that worked the best, operationally, said Mark Whiteside, DelDOT project manager, and the public is impatient for any improvement there.

DelDOT has not officially announced the impact on neighboring parcels. However, the map shows that several houses and businesses would be replaced with roadway, including the Royal Farms store, a Ford dealership, Shore Distributers Inc., a State Farm office and more.

The traffic light would be replaced with an overpass, and several crossovers would be closed.

Design of the project has begun. The public can expect at least one more public workshop after preliminary designs, likely in the spring of 2019. Construction could begin in 2023.

The Millsboro bypass construction is slated to begin construction in 2023, as part of an effort to improve the intersection at Routes 113/24, which Boyce called “one of the worst performers” in the state.

While other portions of that plan have changed, the Millsboro bypass concept hasn’t changed since it was first introduced several years ago. The traffic signal at Routes 113/20 north of Millsboro would be replaced by an overpass and new two-lane roadway, which would wrap around the northeast of Millsboro, crossing fields, railroad tracks and Millsboro Pond. The new road would tie into Route 24 around Hollyville Road.

Design of that project is just now beginning.

Millsboro’s Route 113 will also expand to feature three lanes in each direction.

It’s also finally time to improve the rest of Route 24, where drivers and residents should expect construction projects throughout that corridor for the next five years, including new turn lanes, bike lanes, sidewalks and some widening.

“There will be extensive public outreach before projects begin,” said Whiteside, so people can provide input and learn more at public workshops and information sessions.

DelDOT also works with Sussex County to discuss land-use trends and consider projects that the County favors. This year, Lewes and Millsboro got most of that attention. But a Route 404 Transportation Study is also under way.

“That’s why comprehensive plans are important … because these transportation projects take so long to develop,” said Boyce.

Bethany Beach and surrounding areas will have fewer big projects, but DelDOT will “work with developers on offsite improvements to mitigate the impacts land-use decisions are having,” Boyce said.

Plenty of little paving and tar/chip projects are planned to improve traffic flow and road conditions on back roads that are suddenly taking the spotlight as residents use shortcuts to get around major traffic flows.

DelDOT staff also discussed a current review of road infrastructure as Delaware considers the future of autonomous vehicles on the road.

Most projects are posted online at www.deldot.gov/information/projects. People can also call DelDOT public relations at (302) 760-2080.

The public can view the Proposed FY20 to FY25 Plan online at https://deldot.gov/Publications/reports/CTP.

“The more information we get from eyes in the system, the better decisions we can make,” Boyce said.

The public can also report road conditions or problems 24 hours a day to the DelDOT Transportation Management Center. For instance, people can use the DelDOT mobile app or call (302) 659-4600, or e-mail deldottmc@state.de.us.