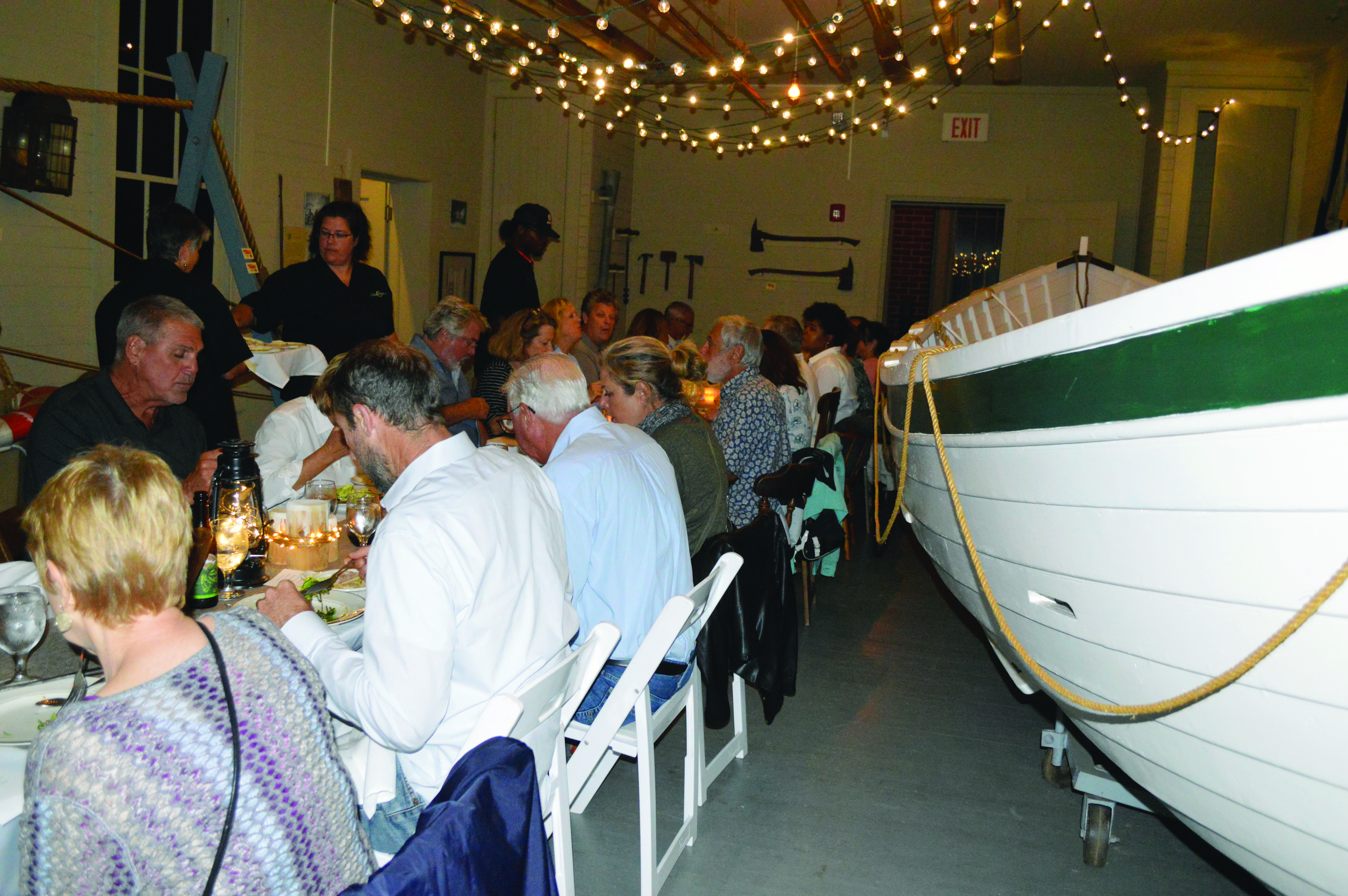 These dishes and more took center stage on Oct. 5 at the historic Indian River Life-Saving Station, once operated by the precursor to the modern-day Coast Guard. The “Savoring Our Coastal Heritage Dinner” was inspired by what the Live-Saving Station’s surfmen may have been eating around the turn of the century.

Coastal Delaware has a rich heritage — both in the history books and on the dinner table. And on Oct. 5, 30 participants toured the museum by lamplight, learning about the daily lives of the surfmen who served at the station and the heroic rescues they performed.

Guests were invited to imagine rescuing someone without modern technology — no helicopters or GPS — in the worst possible conditions: high tides, high waves and high winds. It was freezing, wet and scary.

An old adage warned, “You have to go out, but you don’t have to come back.”

“That was a real reality these guys faced every day,” said Laura Scharle, interpretive programs manager at the museum. “They honestly didn’t know if they were coming back.”

It was a desolate beach at the time, before beach vacations became popular in the area, but the 1800s ocean was full of shipping vessels. Congress didn’t create the U.S. Life-Saving Service until the particularly horrible loss of life of the winter of 1870-1871. The Indian River station was built just north of the Indian River Inlet in 1876, and 419 lives were saved in the following decades.

Crews patrolled the beach every night, responding to flares from any distressed ship. Most of them were small cargo vessels crewed by six to eight men. But, back then, many sailors couldn’t swim. They sailed close to shore for ease of navigation but in doing so risked stranding themselves on the ever-changing shoals and sandbars.

Rescuers either sent a heavy-duty rowboat into the waves, or they rigged up a “breeches buoy,” like a pulley or zipline, to carry victims over the waves to land.

The museum aims to transport visitors back into the feel 1800s. Being a surfman was a respectable profession, as evidenced by the board games, songs and novels inspired by the Life-Saving Service.

Tour guides on Oct. 5 covered a little of everything: memorable shipwrecks; the clever way of ensuring patrolmen did their job every night; whether the museum is haunted; and the morale-boosting reason that the dinner table was always set.

For executive chef Lion Gardner, this dinner was a fun experiment. He took his Blue Moon team on the road to cook from an outdoor tent.

They offered tureens of roasted shellfish served with butter and platters of fried softshell crabs with tartar sauce. A salad of fresh greens was topped with pieces of seawort — a salty pickle-like plant that comes from the marsh.

They experimented with ship biscuits — baked from very basic dough of water and wheat flour — made bearable by dipping into a hearty Chesapeake oyster stew.

“It’s a way to feed people at sea for long periods of time,” Gardner mused of the recipe, though he said he was unimpressed with the resulting biscuits.

Otherwise, Gardner emphasized the simplicity of good flavor, such as the platters of fire-roasted seabass — seasoned only with salt, pepper and lemon.

Guests were particularly wowed by the grilled venison and duck legs with peach barbecue sauce. Sweet corn, peas, tomatoes, braised collard greens and baked beans were served as side dishes.

Dessert was hot cornbread with beach-plum jam, made from the tiny fruits found among the sand dunes.

After dinner, Gardner chatted with guests, describing his culinary research and sharing the recipes.

The feast wasn’t an exact replica of the surfmen’s daily dinner, but “a bit of the flavor they would have eaten. I don’t think they would have been as comfortable,” Gardner joked of the beautiful setup, with white linens covering tables lit by twinkling Edison bulbs.

The guests loved it. “Delicious!” was the response to most of their meals.

“We’re all trying something new,” said Roni Wilityer, although she winced slightly at the venison that most folks enjoyed. She did, however, say she loved trying softshells for the first time.

Half of the attendees were neighbors at Peninsula Lakes in Millsboro, who often plan group outings together. As newcomers to Delaware, they used the Coastal Heritage dinner to learn the history of their new home.

“It’s a nice place to visit and feel like you’re back in time,” said Roni Wilityer.

“It’s just hard to believe, where we live now and how we live now, 100 years ago it was very different,” said her husband, Pete Wilityer. “Everything we’ve got today is on the back of everyone else.”

Museum staff said they love immersing people in the late-1800s lifestyle, from the sights, sounds and flavors to the everyday bravery of those surfmen.

“This is such a special spot, and there are so many people who don’t know about it,” said Scharle. “So, we’re always looking for ways to attract different demographics, and this one was food.”