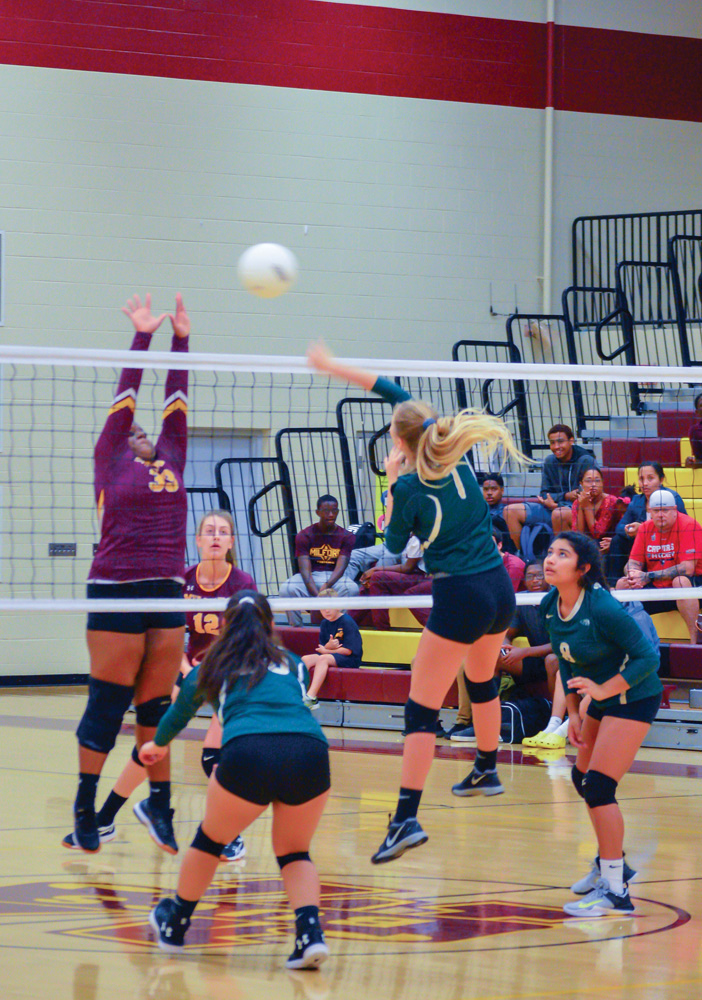 Indians volleyball gets back to winning ways

Indian River High School’s girls’ volleyball team played two of its toughest games of the year last week, in losses to the Delaware Military Academy and to Smyrna, which has become a proverbial thorn in the Indians’ side.

However, those two contests were far in the rearview mirror after this past week, as IR picked up a pair of impressive wins over Milford (3-0) and Delmarva Christian (3-2) to improve their season mark to 8-3.

In the Milford game on Thursday, Oct. 11, IR was playing short-handed, without sophomore leader Raychel Ehlers, who was out due to illness. It took about half of the first game for the Indians to get themselves going, en route to sweeping the Bucs 25-18, 25-9 and 25-13.

It was a complete-team effort from all 10 girls in the match. Marianni Chavez had a match-high 17 assists to go along with four kills, four digs and an ace. Siera Johnson was a killer, so to speak, recording 10 kills along with her three digs and two blocks. Jessica Amezcua filled her stat line with eight digs, five aces, two kills and an assist.

“We knew different girls were going to have to step up with Raychel out,” sophomore Nicole Woody said after the win over Milford. “We all worked really hard after that slow start to get the win — especially after the last two matches. We are very confident and always play for each other.”

Against Delmarva Christian, it was a back-and-forth affair, with each team trading wins through the first four games. IR took Games 1 and 3 with identical 25-23 scores. The Royals picked up their wins in Games 2 and 4, with similar scores of 25-22 and 25-21.

In the fifth and deciding game, IR proved its mettle with a match-clinching 15-11 win.

Ehlers returned with a major statement, to the tune of 34 kills, 10 digs, one block and an assist. Amezcua also had a huge game, with 24 digs, three aces, two assists and a kill. Chavez posted 47 assists, two aces, a kill and a dig. Johnson added 10 kills and two blocks, while Natalie Burnshaw chipped in with five blocks, three kills and two digs.

The Indians were set to return home for a match against Woodbridge on Thursday, Oct. 18. They will hit the road for a conference battle against Sussex Central on Friday, Oct. 19. Results of both matches will be posted to the Coastal Point sports Facebook page, as they were played after Coastal Point press time this week.