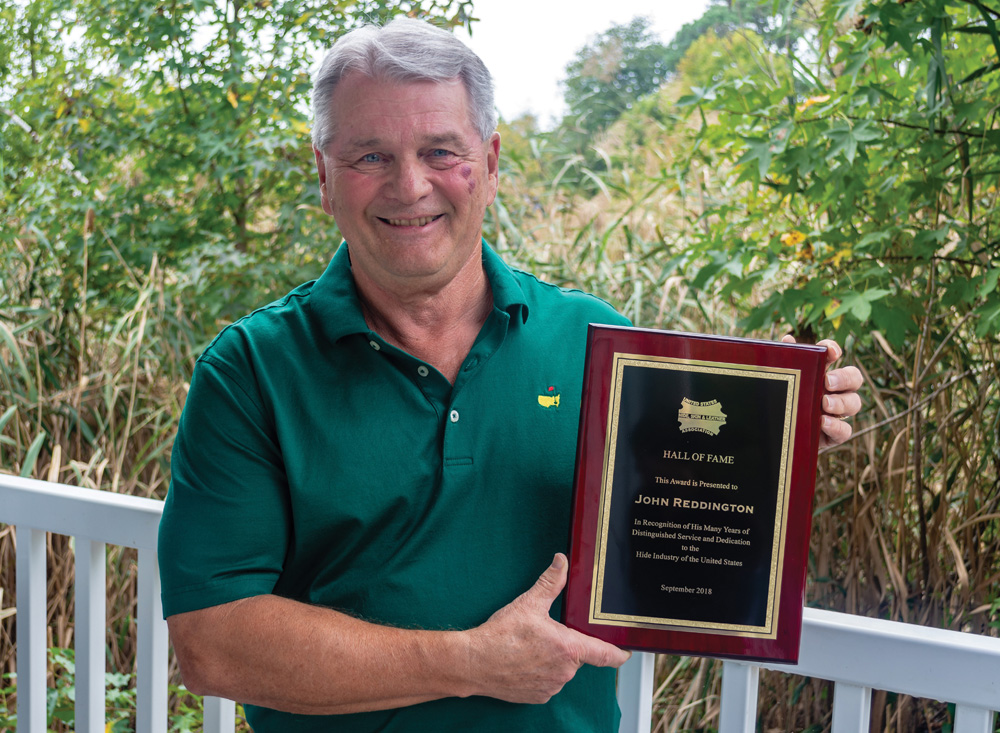 Last month, Ocean View resident John Reddington was the 31st person to be inducted into the U.S. Hides, Skin, and Leather Hall of Fame.

“One every year is given out and I never thought I would get it,” said Reddington. “I was just the president of the association.”

According to its website, the United States Hide, Skin and Leather Association (USHSLA) is a “full-service industry trade organization devoted to the U.S. hides, skins and wet blue leather products industry.”

“The association is made up of the major processors and exporters of cattle hides. The United States exports about $2 billion of cattle hides a year. If you think about the beef industry, they slaughter about 35 million animals a year for meat. The hide is a byproduct. You take the hide off the animal and then sell that to parts of their company —like, Tyson will sell it to their hide-processing side,” said Reddington, noting the hide goes into making and producing items such as furniture, shoes, handbags, and clothing. “Most of the automotive leather we have in the United States comes from American cattle hides. The U.S. is the largest producer and exporter of cattle hides in the world.”

Part of his role as president of the association would require Reddington to resolve trade disputes with foreign countries.

“In China, there were hundreds of containers of hides that were stuck in one of their ports because there was a misunderstanding between the Chinese government, the Chinese importers and the U.S. exporters about the quality of the hides. I would travel to that country, meet with government officials, meet with trade officials, and bring a trade team with me. Within a few days we would resolve the dispute and all those containers would be released, everyone would get their money… When you’re talking about a couple of hundred containers, you’re talking about $50 or $60 million. These American companies were happy to see that I could do that.

“I was able to do that because when I worked as a foreign service officer I concentrated on trade, so I knew most of the trade officials in almost every country the United States did business with because during that time I had traveled to 70 countries. I helped negotiate the Korean Free Trade Agreement, the Central America Free Trade Agreement, the Vietnam-U.S. Trade Agreement, the Japanese Meat Trade Agreement, so I knew a lot of these platers. I could get a meeting fairly easily that business people couldn’t, by calling somebody I knew in an embassy that I knew… I did this in China, Mexico, Japan, Korea, Turkey. That resulted in the association becoming stronger because once American companies saw the association did something other than cocktails and parties, they didn’t mind becoming a member.”

After receiving a bachelor’s degree from the University of Massachusetts and a master’s in Economics from Perdue University, Reddington worked as a foreign service officer for the first 23-years of his career — serving both in Washington, D.C., and abroad.

“I loved being able to influence governments to accept a U.S. government position. Because I was involved in negotiations, even though they’re long and drawn out, you get a feeling of accomplishment and a high from knowing you’ve been able to affect something that’s worth billions of dollars for a lot of people and jobs for Americans.”

He retired in December of 2000, and opened his own company, concentrating on trade disputes in January of 2001.

He was simultaneously serving as vice president of trade policy for the American Meat Institute when he was asked to serve as the president of USHSLA.

When asked about his three favorite career highlights with the association, Reddington recalled helping to put together a trade show in Hong Kong.

“I convinced 25 American companies to come to the show. This was a three-day show, and over those three days American exporters sold $75 million worth of hides. That became a venue they went to every year from 2002 up to today,” he said. “Second, the hide industry had standards but they were convoluted and confusing, and misunderstood by the buyers as well as the sellers. So, I worked with the industry and came up with a new set of standards that’s now used by the industry and respected by major hide importers in the world.

“There’s also an international association,” he noted, as his third highlight. “After about four years I was asked to be the president of that. Their headquarters are in Hong Kong, so I helped that association and through them I was able to help resolve trade disputes between our countries.”

In 2013, Reddington retired from his position with USHSLA, having moved to Bear Trap Dunes as a fulltime resident in 2012. He’s spent his time in retirement as an active member of the community serving on the Ocean View Board of Adjustment, volunteering for the Town’s police department, and serving as Santa Claus for the Town’s holiday festivities. He also volunteered at the blood lab in the Veterans Affairs Clinic in Georgetown, and served as president of the Bear Trap Dunes Homeowners Association.

Reddington said he was called by the association’s current president, Steve Sothmann, who notified him of his impending induction.

“It meant a lot to get the award,” he said. “I was humbled and proud to receive the award. It’s a prestigious award.”

The award ceremony was held on Sept. 26 in Chicago, Ill., where Reddington was honored for his significant contributions to the association and its industry. Reddington was able to attend the ceremony, held at the Intercontinental Hotel, with his wife, daughter and son-in-law.

“We were there for four days sightseeing and I got to see a lot of old friends.”

His vision and proposed changes to the U.S. Hide Association revitalized and restored value to the U.S. hide industry in the U.S. and worldwide, according to Chris Mullalay of Mohawk Trading, a New York hide exporter who have the induction speech.

“My job as the president was to devise a strategy to increase trade for its members,” explained Reddington. “I think I improved the business for them from $1 billion to almost $3 billion in the time I was there by opening up new markets, helping to resolve trade disputes between importer countries and the United States, helping to put in place standards that were adopted by the industry and importers.”

Sothmann noted Reddington was a shoe-in for the Hall of Fame.

“They wanted to give it a number of years between his retirement and when they selected him, but he was an inevitable pick since the day he retired,” said Sothmann. “One of our board members, in their speech at the award ceremony said John took an association that was being held together by like, one cocktail party a year and he turned it around and grew it into what became a very professional organization. In that role he did everything. For a while he was a one-man show doing everything for a small but large industry, just in terms of the amount of dollars in the marketplace.”

Sothmann, who worked under Reddington prior to his retirement, said he was grateful for the opportunity to work with him and see him inducted into the Hall of Fame.

“John’s lasting legacy in the association lives through what he built in his time here. I’m very happy to have him as a mentor in my role.”

“There are people in the industry who I feel have done a lot and haven’t received the award, so it’s pretty special,” said Reddington. “And, how many people can say they’re in a Hall of Fame?”