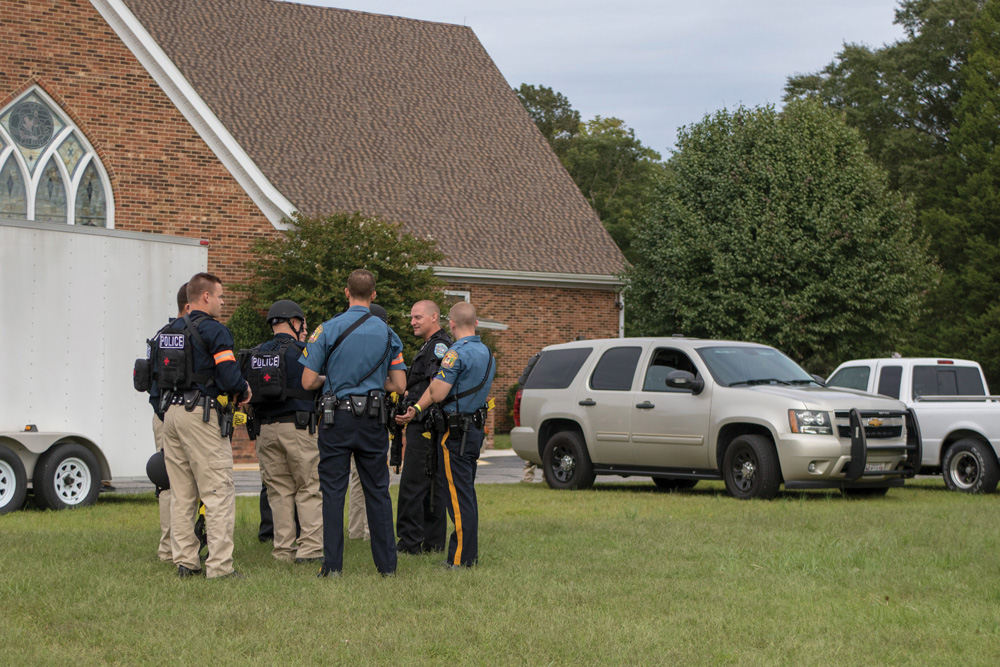 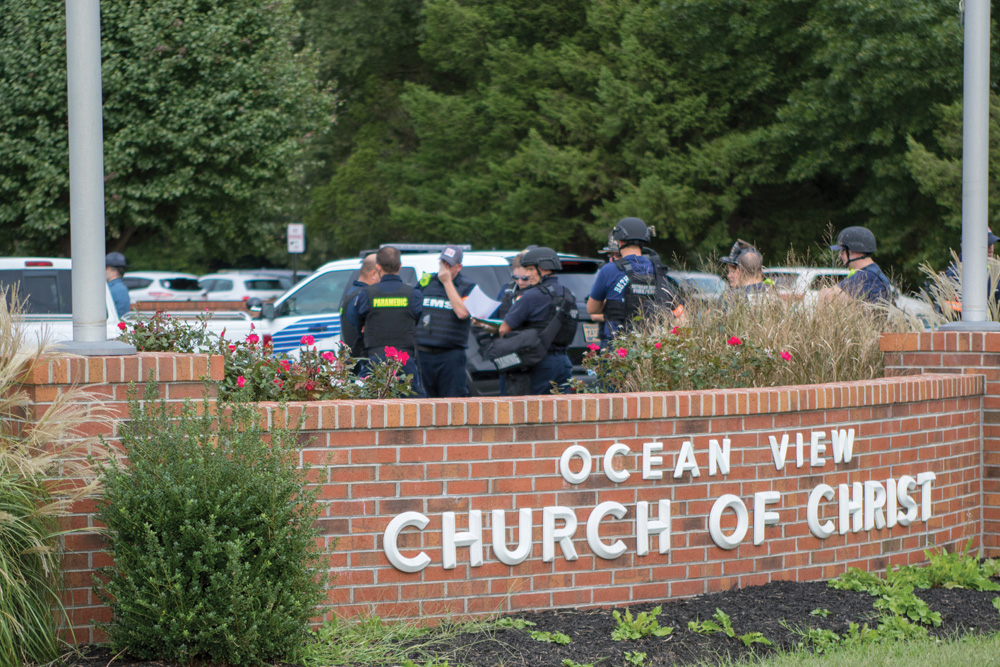 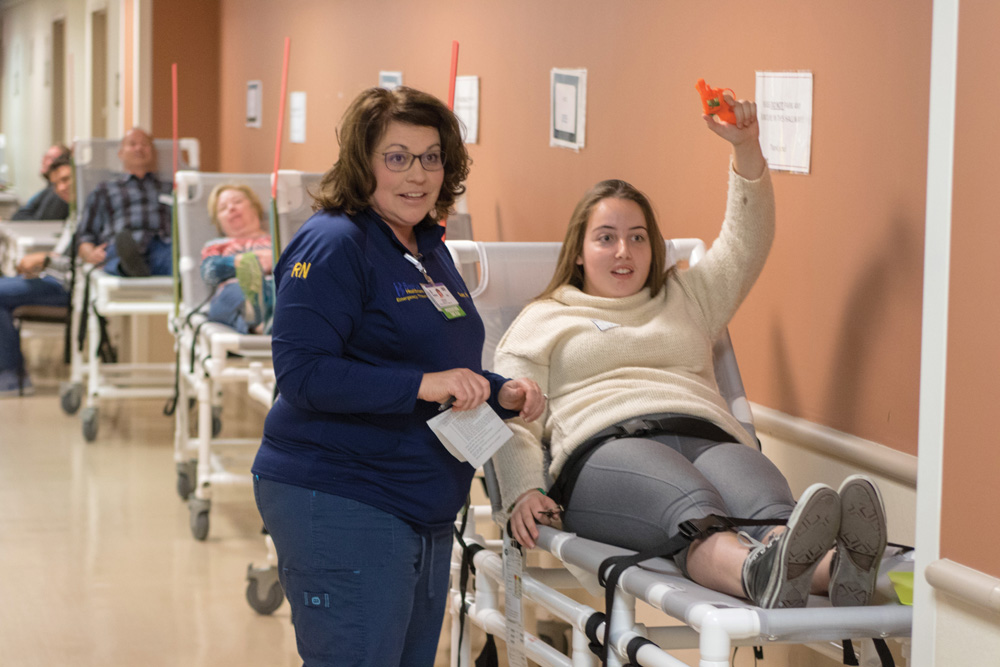 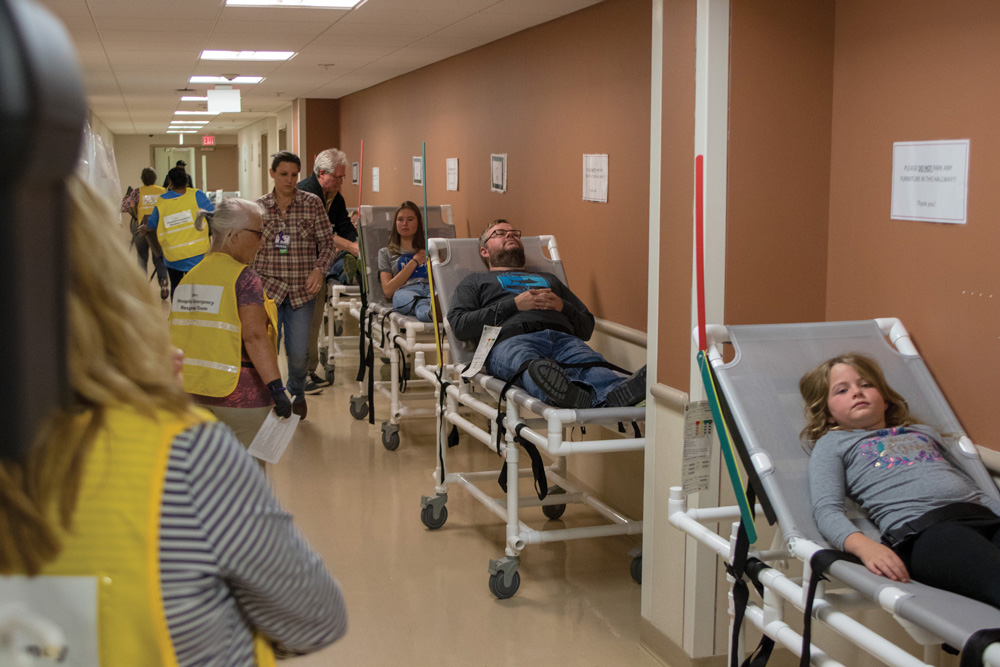 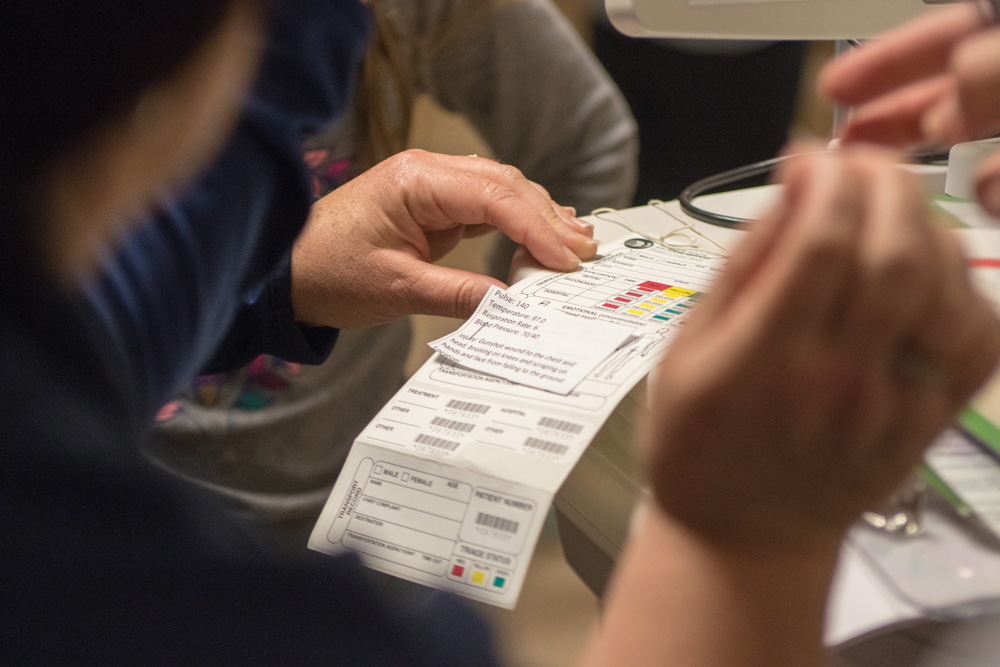 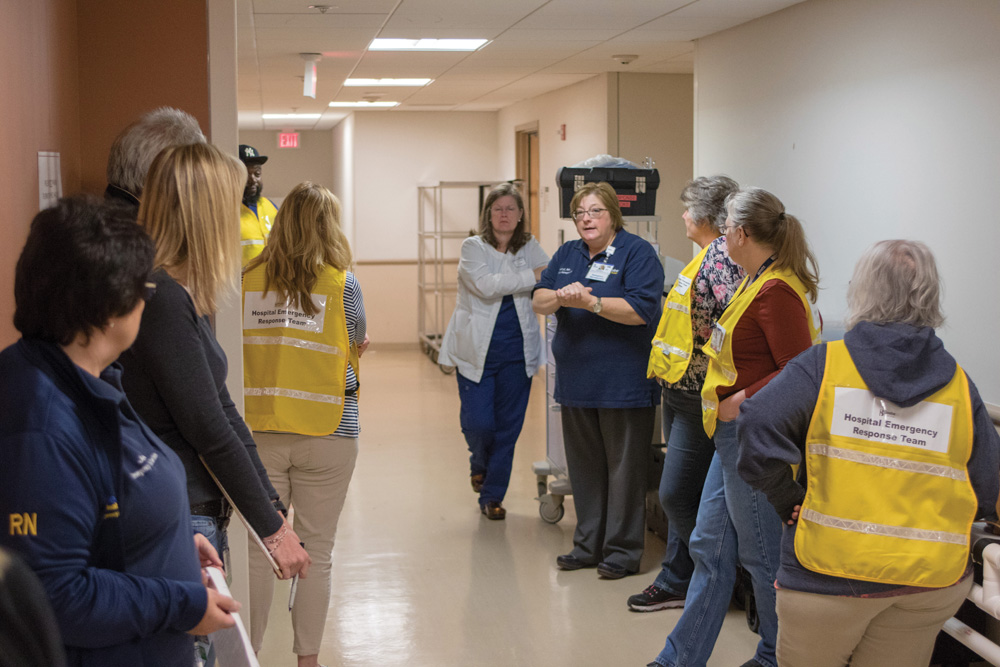 With gun violence a reality in today’s world, local law enforcement, emergency responders and hospitals are hoping such a tragedy never reaches our area, but are preparing for the worst.

On Oct. 13, agencies across southeastern Sussex County participated in an active shooter exercise.

“It’s so important to make sure when we practice things and train that that’s exactly what happens in real life,” said Sgt. Richard Bratz, Director of Public Information for the Delaware State Police. “We can see where all our strengths are, find areas for improvement and increase our communication with everyone.

“We’re here to neutralize the threat, if there is one, investigate together, and to basically combine all of our resources to do the best job for the citizens of Delaware and make sure public safety is at the forefront.”

Set up and run by The Olson Group at the Ocean View Church of Christ, the scenarios allowed officers and paramedics to use their Rescue Task Force Training.

“What we’ve learned from events like Columbine and Virginia Tech is more lives are lost because EMS is waiting so long to go in,” said Matt Farlow, a paramedic with the Sussex County Paramedics. “The old style was, police would go in while medics and fire would stage somewhere else away from incident in what they would consider a safe zone. They would wait until all shooters were down, confirm the building was empty and then send EMS in. By that time, for many people, it was too late.

“Now, the initial wave of police going through have one job — take out the shooter. They’ll even step over injured people. Their one job is to prevent more injury. The second wave would come in with police and some EMS and their job is to go through, and as they come across people, very quickly start basic triage to stop the bleeding.”

“Church of Christ did a wonderful job stepping up and being role players,” added Ocean View Police Chief Ken McLaughlin. “Kudos to Pastor Ethan Magee for allowing us to use their facility. We can’t thank them enough.”

Funding from Homeland Security paid for the multi-agency exercise, which the Ocean View Police Department began planning in February.

“This is so much work — hours and hours into just the planning to pull it off ,and then it’s over in a few hours,” said McLaughlin, noting that OVPD Administrative Officer Russell Carter did a great deal of work to organize the exercise.

During the course of the exercise, which ran from 1 p.m. to 4 p.m., two separate scenarios were acted out, with emergency personnel responding with little to no information.

While emergency personnel do work together from time to time, the exercise was an opportunity for agencies to come together on a larger scale.

“Our emergency operations personnel as well as assets are on scene assisting with this exercise. This is an opportunity for them to test their skills, protocols, and work out any kinks,” said Chip Guy, Communications Director for Sussex County Government. “Exercises like this are a good opportunity to have different agencies coming from different disciplines — law enforcement, fire, EMS — all these moving parts have to come together, gel together and work in a coordinated fashion. If an event such as this were to pan out, you need all those moving parts connecting, moving together, and working in a way that’s fluid and seamless.”

“We would take the initial calls and then it would be our job to dispatch the first responders here. In Georgetown at the center handle police, fire and EMS dispatch, so we’d be the ones handling all the communications,” said Sussex County Emergency Operations Center Director Joe Thomas. “After, we would probably bring the vehicle in and be a support piece with the investigation, handling the media, those sorts of things.”

At Beebe, there was a simulated influx of victims varying in age and injury, one of whom was concealing a fake gun that they would later discharge as part of the scenario.

Hopple said the hospital pays for all employees to be trained in ALICE — Alert Lockdown Inform Counter Evacuate — a technique that gives bystanders the opportunity to act instead of wait in an active shooter situation.

“It gives people options to help them save their lives, and the lives of the people they’re caring for,” she explained.

Hopple said while Beebe has a no weapons policy, often weapons are carried into the Emergency Department.

“There are people carrying weapons every day in there. You would hope as a healthcare worker you wouldn’t have to deal with that, but you do,” she said. “It’s not just guns anymore. There are a lot of nurses being stabbed; injured with knives. If they see someone with a knife clip in their pocket, ask them to put it in their car. If they come into the [emergency room] carrying, they’re asked to leave to secure them and then return.”

While an individual may legally be permitted to carry a gun, Hopple said it is for the safety of all persons in the hospital for them to be prohibited.

“It doesn’t mean the person carrying the weapon was going to do something, but it could be the person next to them who is sick and upset. We find weapons on people a lot more often than you would think. I’ve found a gun on a trauma patient.”

During the exercise, members of Beebe’s Emergency Response Team tested their training and equipment.

Melissa Markham, Quality Assurance Coordinator for Beebe’s clinical laboratory, is one of about 25 employees on the volunteer-based team.

“They can be an all-around hospital emergency response team no matter what the incident is,” added Hopple. “It’s very important for exercises to take place. You want to work with the people you’re going to work with in a disaster.”

Markham said the team is able to receive all levels of emergency training, and meets about eight times a year.

“Sometimes it’s working meetings — we’ll go down to the cage, where all this equipment is stored in a locked area. We’ll take inventory or get new equipment in,” she said, noting that through trainings they’ve been able to add essential supplies to their emergency kits, like baby and adult diapers.

Hopple said during the exercise, the team is able to evaluate equipment — like the 10 new overflow beds the hospital purchased.

With the exercise complete, McLaughlin said there were a few meetings following to review, with an official after-action report expected in the coming weeks.

“I thought all-in-all it was a great event,” he said. “Now there will be a lot of debriefings, a lot of information written into an after-action report that will be distributed as well. We want to show our strengths, we want to point out our weaknesses, and for those we’ll develop a plan for corrective action — What is the fix, who’s responsible for fixing it? A lot of it will be used to guide us in future trainings.”

Training together is key, said McLaughlin, noting that OVPD conducts similar exercises on a smaller scale throughout the year.

“We have an obligation to the community to make sure they know we’re doing everything we can, so God forbid if something like that were to happen in our community we’re prepared to respond to it.

“We try to get as close to real as possible. You have to do that. I think some of our critics say, ‘You’re this little police department and nothing’s ever going to happen in Ocean View.’ But I’m sure there are plenty of other places throughout the country that have experienced one of these tragedies that said the same thing the day before… We’ve got to train, train, train and hope the day never comes but be prepared in case it does.”