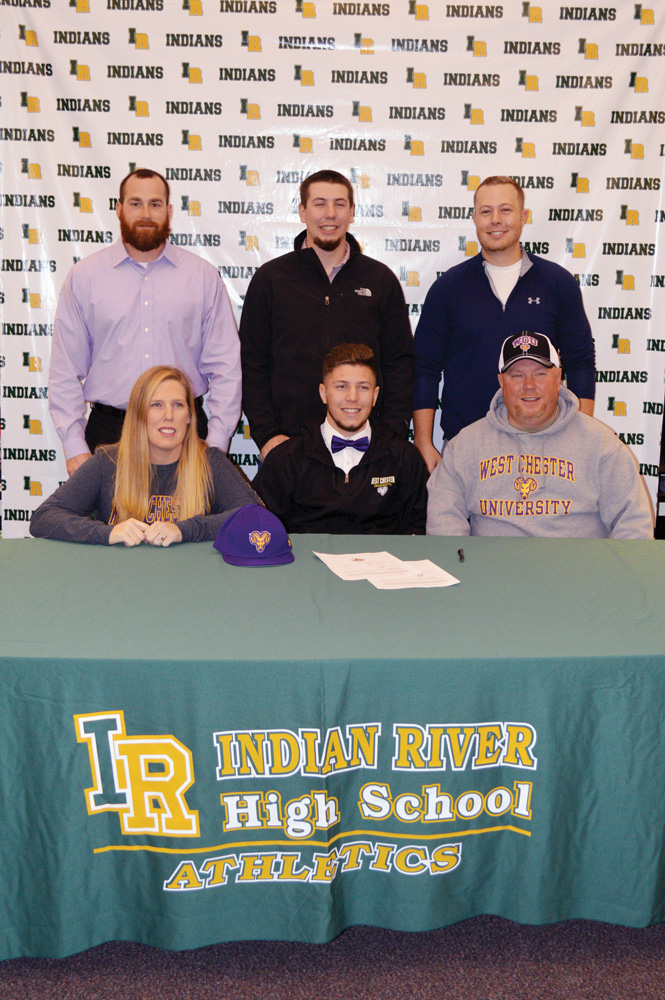 It’s many a young kid’s dream to be able to play their favorite sport collegiately.

Indian River High School senior Jacob Anderson has made that dream a reality. Last Thursday, Nov. 15, supported by several members of his family and friends, he signed his National Letter-of-Intent to continue his academic and athletic careers at West Chester (Pa.) University, playing baseball.

“It’s a great school. I just fell in love with it, and they are one of the top Division II programs in the country,” Anderson said of his school choice. “They have a great campus in a small-town atmosphere, which is what I liked.”

And the Golden Rams’ being a successful program was certainly attention-grabbing.

“They won the national title two years ago and were ranked in the Top 25 last year. I wanted to go to a place I could play at, and I want to win. They have a really good program, and I am excited about joining them.”

Anderson is the son of Joe and Jennifer Anderson, and has an older brother, Joey, all of whom were at the signing last week. He was also accompanied by his travel baseball coach, Marshall Betts, IR football coach Phillip Townsend and Bobby Hammond of Atlantic Physical Therapy. (Hammond is currently treating Anderson during his recovery from ACL surgery, after an injury that happened during this recent football season.)

The Indians senior will miss his senior baseball season during his recovery, but he said he is eagerly looking forward to being all healed up in time for the Rams’ fall ball season in 2019.

“I’ll be 100 percent by June, so I will definitely be ready for the fall ball,” asserted Anderson. “It’s tough right now, and missing my senior year is disappointing for sure.”

Anderson said he was sold on West Chester after also considering Wilmington University and Salisbury University, as well as some other schools farther away.

“It’s only about an hour and 50 minutes away the way my dad drives,” joked Anderson about the distance to West Chester. “It’s far enough to be away from home, but close enough at the same time. I didn’t want to go to school in my back yard.”

The West Chester program — which also won the national championship in 2012 — finished 44-11 overall and ranked No. 19 last season. Head coach Jad Prachniak will be in his seventh season at the helm of the Golden Rams program in 2019. He is the youngest head baseball coach to ever win two Division II national titles. He is 204-92-1 (.689) overall in his WCU career.

“We were emailing back and forth after they saw me at a camp,” Anderson said of his recruitment. “Then they saw me my last time at a tournament up in Pennsylvania, and then they contacted me a couple of times. They called me one day and said they had a spot for me.”

Anderson will be heading into school undecided as to his academic major, but he said he is leaning toward a major in sports medicine.

He, along with classmate J.J. Killen, played for the Delaware South team in the Carpenter Cup in Philadelphia this past spring. Anderson batted 3-for-5 with a home run and a couple RBI during a scrimmage leading up to the Cup games, while batting leadoff and playing centerfield. He is expecting to play outfield at West Chester as well.