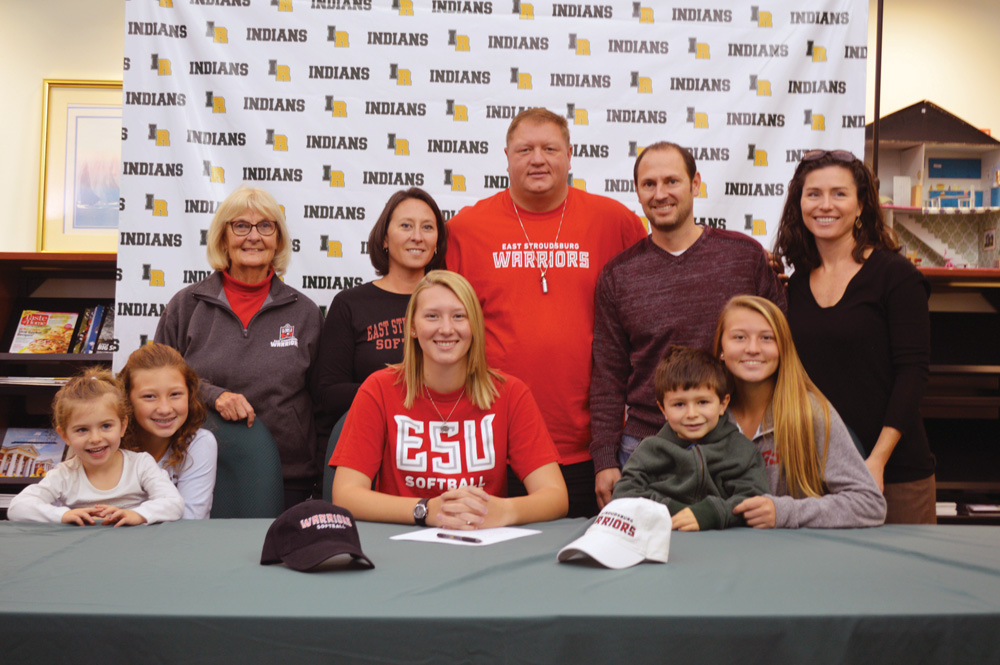 O’Shields sets sights on the circle at ESU

She has had a very strong couple of years inside the circle for the Indian River High School softball team, and those efforts have led to several colleges expressing interest in her services.

Ultimately, for IRHS senior Abby O’Shields, it was a combination of both academic and athletic opportunity at Division II East Stroudsburg University that was the most enticing. In front of a crowded library inside the high school, where family and friends gathered, O’Shields this week made her official announcement that she was going to become a Warrior and don the red-and-black come next fall.

“The coach is very uplifting and positive, and I really liked the input that she gave me when I went to her camp,” said O’Shields, who chose ESU over the likes of Goldey Beacom and the University of Delaware. “East Stroudsburg had all the different majors that I was considering, because I hadn’t decided yet at first. I really like the snow, and how it is so close to New York City and has a lot of things going on.”

O’Shields — who will major in pre-engineering, with aspirations of becoming an aerospace engineer — is the oldest of three kids of parents Sam and Theresa O’Shields. The lefty is hoping to continue the success the IR softball program has had the past few years and cap her senior season with a state title.

“So far, we’ve won division and conference titles,” O’Shields said. “I’d really like to end things with a state championship this year.”

During the 2018 season, O’Shields helped guide the Indians to the Henlopen Conference South Division crown and a 13-6 overall mark. Their season ended abruptly in the first round of the Division II state playoffs, following a 4-1 setback to Lake Forest.

O’Shields will be heading to a Warriors program led by Jaime Wolbach, who will be entering her fourth season at the helm this coming spring. The Warriors, who compete in the Pennsylvania State Athletic Conference, finished 14-26 overall in the 2018 season. Currently, there are two other girls from Delaware on the roster — junior Kaylee Hazewski (Middletown/Red Lion Christian) and freshman Rachel Seiverd (New Castle/St. Georges Tech).

In addition to her parents, O’Shields was joined at the signing announcement this week by her sisters Savannah and Parker, grandmother Ruth Schifano, aunt Sarah Schifano, uncle Matt Schifano, and cousins Grace and Anthony Schifano.