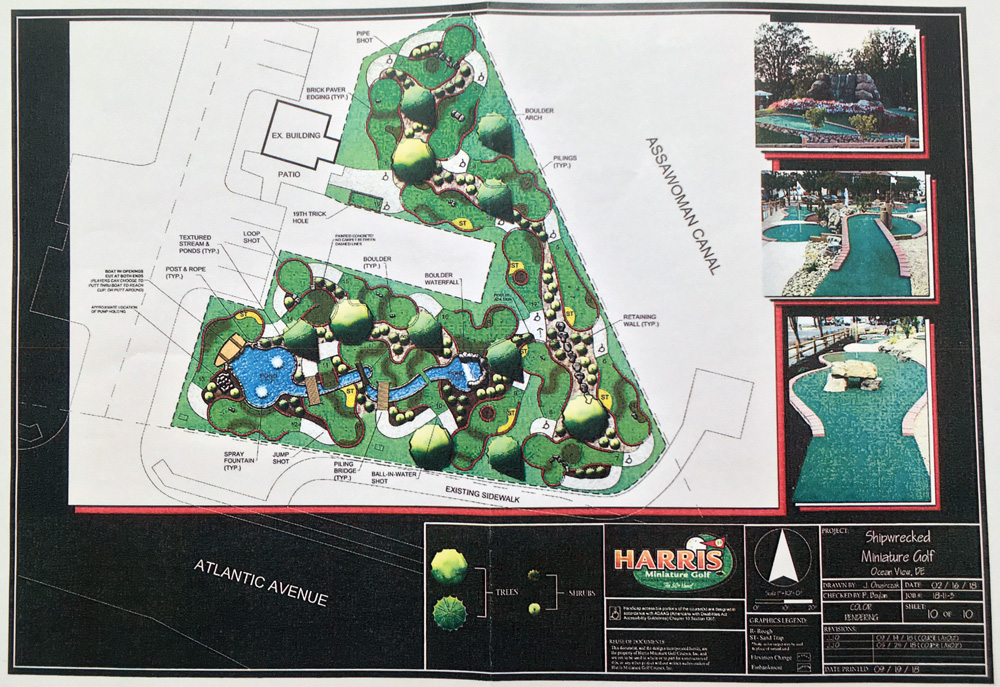 A miniature-golf course is one step closer to opening in the Town of Ocean View, after the Town’s Board of Adjustment recently voted unanimously to approve a special-use exception application.

At the hearing, held on Dec. 20, 2018, Delaware attorney Jim Griffin spoke on behalf of Patrick and Rebecca Adams, who wish to open the 19-hole course at 3 Atlantic Avenue. The property is zoned General Business 1, and a miniature-golf course is now permissible within that zoning district if a special-use exception is granted.

Currently, the property, owned by Crosswinds Holdings LLC, houses Juice Box and serves as storage for a granite and stone business.

“The mini-golf will not be a homemade, hand-built, flat course made out of outdoor carpeting and pieces of 4-by-4 lumber, like some of the old courses built years ago,” said Griffin. “The applicants intend to develop a professionally designed, attractive mini-golf course with attractive landscaping, and natural features…”

He noted that all lighting would have a downward screen, and the hours of operation would be limited, by town code, to between 9 a.m. and 11 p.m. Proposed parking includes 18 total spots, three of which would be designed as handicapped-accessible.

“We believe this will be a positive addition to Ocean View — something families can walk or bike to without having to travel by car into Bethany,” he said, adding he believed it could lessen traffic. “We believe it will have a positive impact on other businesses in the town by helping to keep families in town for recreation, rather than going outside.”

Rebecca Adams, an Ocean View resident, said both she and her husband were born and raised in the area.

“I tell you that so that you understand that I actually love Sussex County and we want the best for it,” she said. “In addition to the miniature golf, we will utilize the existing building for drinks and snacks, and the old warehouse will be torn down and a smaller storage facility will be added.

“The miniature-golf course theme will be ‘shipwrecked.’ … We will highlight the history of the area throughout the course. As many of you probably already know, shipwrecks happened off the coast of the Atlantic.”

She said they plan to transform the property, which she said currently has “an industrial feel.”

“It will be the first property on Route 26 as you head west from Bethany Beach, and will serve as the gateway to Ocean View.”

Adams said they have contracted with Harris Miniature Golf of New Jersey to construct the course. She said the company is a nationally recognized leader in design and construction, having built more than 800 courses built in the U.S. and globally. She said she and her husband have visited more than 20 courses they have designed and constructed, which includes the course at Frontier Town in West Ocean City, Md.

The course will have 18 holes, with a 19th hole for a chance to win a free game. It will also have a waterfall on one end and two fountain ponds. It would feature low-level background music, with no loud booms. It is proposed that a small boat would be placed on one hole, but it would not move.

Adam Swain of Fancy Cutz, who has been contracted to do the course’s landscaping, said the property would feature more than 100 native grasses and trees, in addition to 40 non-invasive shrubs.

The Town received a number of letters about the application, both in support of it and opposed to it. It also received a petition of support signed by 14 residents.

Ocean View property owner Brenda McIntyre, who has been a resident in the town for nine years, on Dec. 20 voiced her opposition to the project.

“I just am opposed to what we’re going to see as we’re walking along the canal towards Bethany Beach when we come across this miniature-golf course,” she said. “I don’t think it’s the right fit for our community. We’re not a resort town… We are residential, mostly seniors, and we like it calm and serene.”

“I live along the canal, and it’s been a pleasure having it there… I know they’ve done their due diligence, I’m sure, but parking… Are they planning on using what is there for the canal?

“They’re talking about walking… Take the average age of Ocean View. I don’t think they’re going to be walking to a miniature-golf course.”

Resident Tricia Supik said she was concerned the course would overshadow the Assawoman Canal Trail’s access point and have a detrimental effect.

“Customers of the mini-golf course will most likely utilize the limited restrooms and parking facilities that are right there for trail utilization, making utilization of the trail more difficult, if not impossible. Wear and tear on those facilities because of increased use by customers of the mini-golf will result in a cross-burden for the Town.”

Adams said there is already a restroom in the former Juice Box building that customers will be able to use. She added that they hadn’t worked out whether it would be a 12-month business, but said she “doesn’t foresee being open January, February or March,” due to weather.

Board Member John Reddington moved to grant the special-use exception.

“I think the plan that’s been proposed is attractive. It would be more pleasing than the present use of that property.”

The board voted 5-0 to approve the special-use exception.