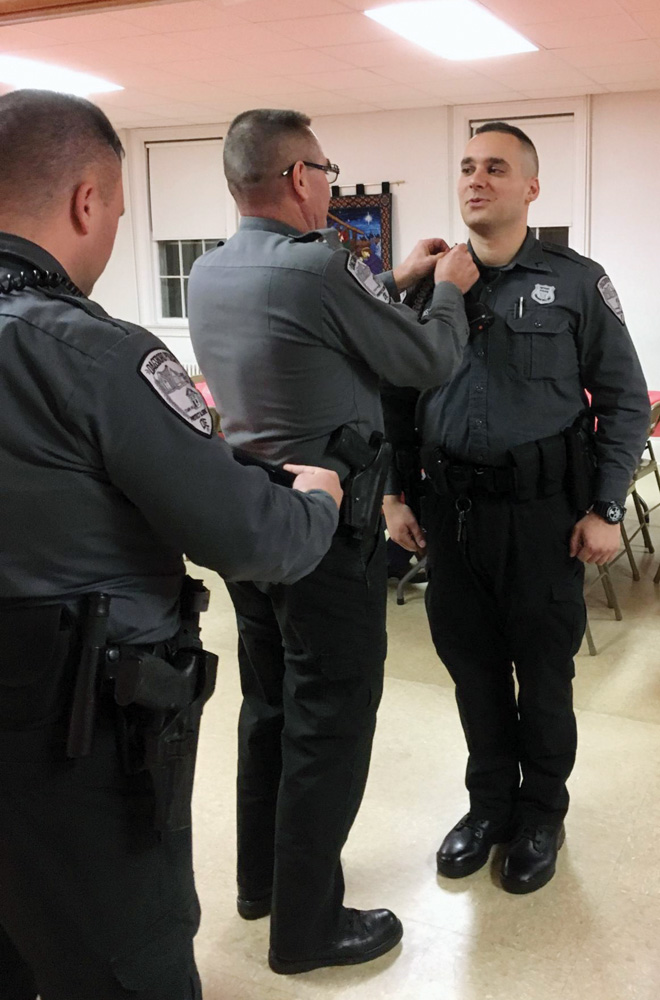 Discuillo was awarded with the Expert Officer Cord from Toomey, which Toomey said was merited due to Discuillo’s meticulous and impartial enforcement of the law during the time period of February 2018 to January 2019. His efforts led to an overall performance exceeding 1,000 criminal and traffic arrests, with a conviction rate greater than 85 percent.

“The Expert Officer Cord award went hand-in-glove with his promotion,” Toomey noted. “He has excelled our expectations. He made 1,000 arrests for the year. His performance and attitude provided for his accelerated promotion. To say that he was a great addition to the department would be a perfect way to express it.”

Discuillo said the promotion was not solely his honor.

“This was a total team effort,” said Discuillo. “The entire department all did great things in 2018. None of this would be possible without the backing of town hall and the administrative staff. We had a really great year.”

Also at the meeting on Monday, Toomey presented several reports regarding the department’s activity for the month and the year, and a comparison of activity from 2006 through 2018:

• During the course of the month of December, the department apprehended 22 wanted subjects for local jurisdictions and the courts. The officers made a total of 27 criminal arrests that included among them arrests for terroristic threating and resisting arrest, and three separate drug arrests. There were a total of 148 traffic arrests made by the DPD in December and seven collisions investigated.

• For the 2018 calendar year, there were 2,083 total traffic arrests and 210 total criminal arrests by the DPD. Among the notable criminal and traffic arrest figures, drug-related offenses topped the list with 45. There were 18 DUI arrests, and a combined 15 arrests for theft and shoplifting among the other arrests reported. The department also investigated 95 collisions in the town.

• Toomey discussed the collective work of the department for the entire 2018 year. There were 108 wanted subjects apprehended for local jurisdictions and the courts.

• Toomey made special mention of three events that the department had participation in, which included the town’s first annual National Night Out. He thanked the community for its support in being able to celebrate National Thank a Police Office Day again in 2018.