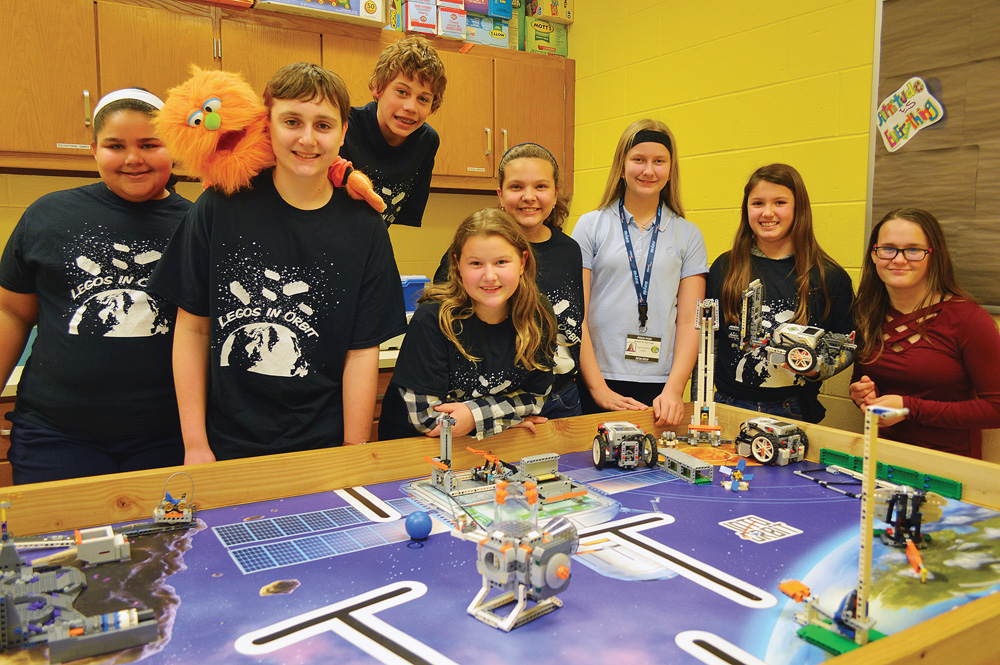 SMS shoots for the stars with robotics win, asking for public support

Selbyville Middle Schoolers have been on a space mission all winter. They’ve designed an autonomous robot to help with humankind’s mission to Mars: moving satellites into orbit, angling solar panels toward the sun, moving supplies by the cartful, assisting astronauts in an airlock chamber and more.

Of course, this is just a toy robot and a diorama. But the skills learned are real.

The SMS Lego Robotics Team has qualified for state finals on Feb. 23. Having won the FIRST Lego League (FLL) Salisbury, Md., regionals in December, they will participate in the Maryland state championship in Baltimore.

The club teaches many skills, from STEM and computer skills to overall creativity and problem-solving. FLL also celebrates the positive aspects of competition: inclusion, teamwork, gracious professionalism and fun.

They’ve aimed to create a safe environment, to trust each other and support their teammates.

“We always help each other with stuff, even outside of Lego Club,” said Fahringer.

There are three areas of judging: technical challenge (the robot completing missions on a game table); research project (brainstorming a realistic solution to a major space-related problem); and core values (overall teamwork and sportsmanship).

Students designed a handheld robot to drive around a special course and complete challenges, autonomously — all hand-built with Lego pieces. (Imagine an electric Lego vehicle with arms and claws that moves other Legos around on a large tabletop game board.) The bot needs to move small items in a number of ways: lift, carry, spin, roll and angle.

Sensors on the vehicle can find boundaries of the competition ring, and good programing will propel the vehicle toward its targets. The students program their robots to react in each situation.

Every detail is a separate instruction: move forward an inch, repeat until you find the challenge zone, stop, rotate X number of degrees, lift the arm, open claw, extend the arm, stop moving, close the claw, and so on.

Teams get three chances to complete the course, with time to troubleshoot in between. It’s precise work. And students have to show good sportsmanship, despite frustrations, because judges are also monitoring good attitudes, even behind the scenes.

The middle-schoolers invest months of hard work. They build a working Lego robot to complete the tasks, then accurately program the robot to use its many attachments. It’s a lot of trial-and-error, and they have to stay cool when problems arise — even on competition day.

“There’s no perfect program, but being consistent can help you get a lot of points,” Adkins said.

“We had to problem-solve and see what will work,” Johnson said.

On the game table, they have three chances to rack up points. Teammates run the two-minute competition in pairs, changing out the robot’s attachments and opening up a new computer program for each challenge zone.

Also, a long-term research project required them to solve a problem regarding outer-space travel. The team envisioned (and built a small Lego model of) a machine that processes unwanted human and plant waste, through anaerobic digestion, into methane and fresh water (with some sludge byproducts).

“We’re going to be using the methane to fuel the rocket and food byproducts to eat. We won’t need to send the feces back to earth anymore,” Vaughan said.

Several years ago, when they last attended states, SMS ranked in the top third of competitors.

Robotics has taken the Indian River School District by storm, as new teams are already excelling in Lego and Vex challenges.

Ironically, many students joined the club not realizing it was for robotics.

“We kind of thought it was just messing with Legos, until we came here and learned how to program everything,” said McKirby.

“But when it actually kept going on, it was like programing the robot and doing projects and core values and everything,” Johnson said. “We’re not just building with Legos!”

“It’s mainly about teamwork. We have to go through judging and actual tests,” said Adkins, who followed her older brother into robotics. “I immediately fell in love with it because, with us, and with core values, it almost feels like we’re a family”

Vaughan still remembers his mom suggesting he check out an SMS demo of dueling robots back in elementary school: “I just bolted down the hallway, went in there, took a look at it, and just fell in love with it at first sight. I just couldn’t not do it.”

To help send the young programmers to state finals, the team is requesting the public’s help.

What should potential donors know about the SMS students?

“We are a great team,” said Johnson.

“We want to make a name for ourselves. We’re not going to fail,” said Adkins.

“We want to be known as a family.  We want this school to see victory,” said Vaughan.

Donations can be mailed to the school, with checks payable to “SMS PTO,” with a memo line of “First Lego League Robotics,” sent to Selbyville Middle School; 80 Bethany Road, Selbyville, DE 19975.

“Thank you so much for allowing us the opportunity to go to states!” Davison said.