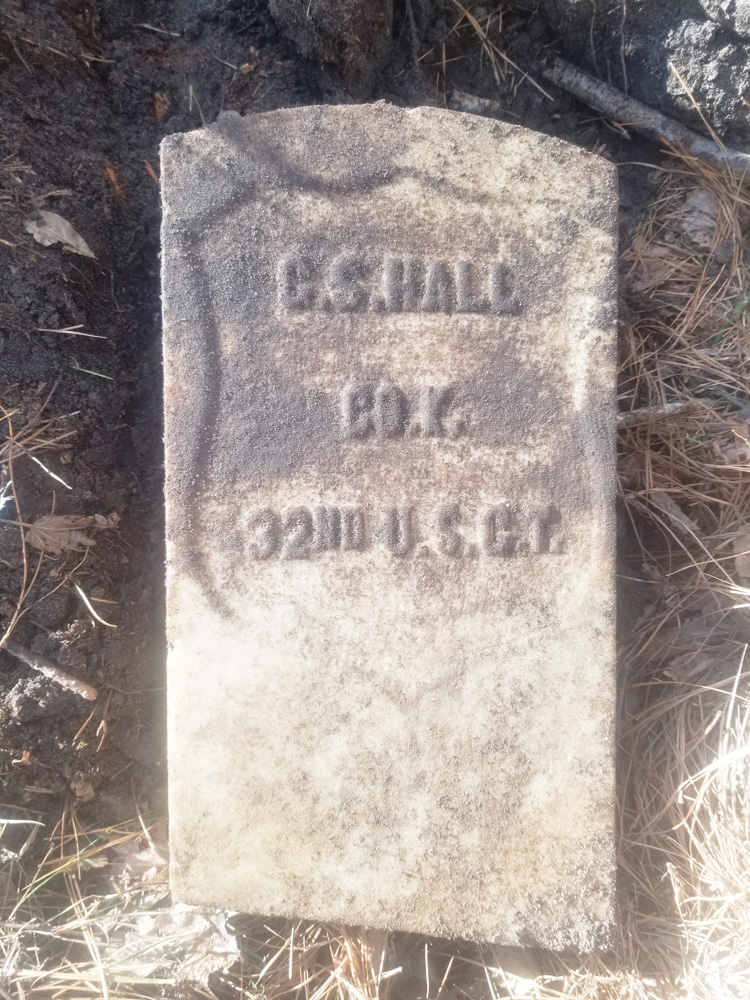 Archaeologists working at a property near Frankford have discovered what appears to be the site of a cemetery known to the local community to contain the remains of African-Americans who lived in the area, state officials announced this week.

Under the observation of an archaeologist from the Delaware State Historic Preservation Office, archaeologists employed by a private landowner have delineated at least nine graves at the site, known as the Orr Property or Hall Plantation.

A headstone was also found at the site. bearing the name C.S. Hall and the lines “Co. K, 32nd U.S.C.T.” (an abbreviation for U.S. Colored Troops, the designation for units comprising African-American soldiers during the Civil War.)

The headstone has not been correlated to a specific grave, and no further information is yet known about the identities of the burials at the site, officials said. The presence of the remains of enslaved persons has not yet been confirmed through archaeology or review of the historical record, they emphasized.

“This cemetery is a significant discovery for the community and for all Delawareans who value and appreciate our state’s rich history,” said Tim Slavin, director of the Division of Historical & Cultural Affairs, which oversees the State Historic Preservation Office. “As work continues at the site, we hope to learn more about those who are interred there, so that they may be properly memorialized and their personal stories retold.”

The State Historic Preservation Office will offer guidance, advice and supervision as the landowner continues archaeological work at the site, officials noted. Though the site is located on private property, the State will take an active role in ensuring that the ongoing archaeological investigation is thorough, professional and carried out in an ethical and responsible manner, they said.

According to the Division of Historical & Cultural Affairs, the landowner was an active participant in the gathering of local information about the site and has indicated that the cemetery will be preserved. The State will work closely with the landowner to determine a plan for preservation, they said.

“I would also like to thank the neighbors nearby for their role in calling attention to the presence of a cemetery here,” Slavin said. “Their recollections and local knowledge about the site and its location were key to discovering these burials. They spoke up, and thanks to them we can add a new page to Delaware history.”