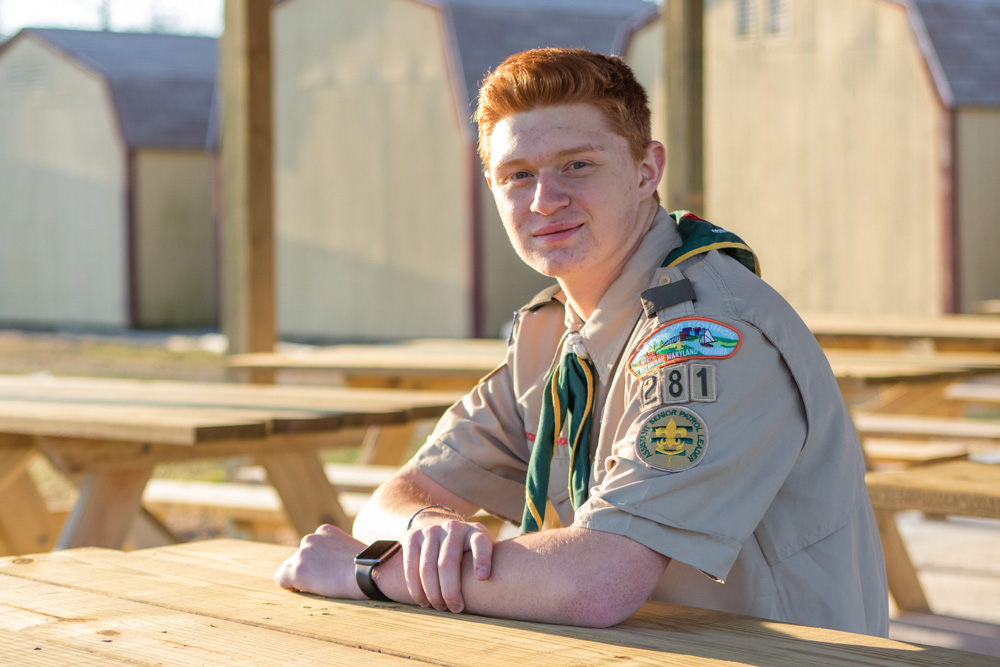 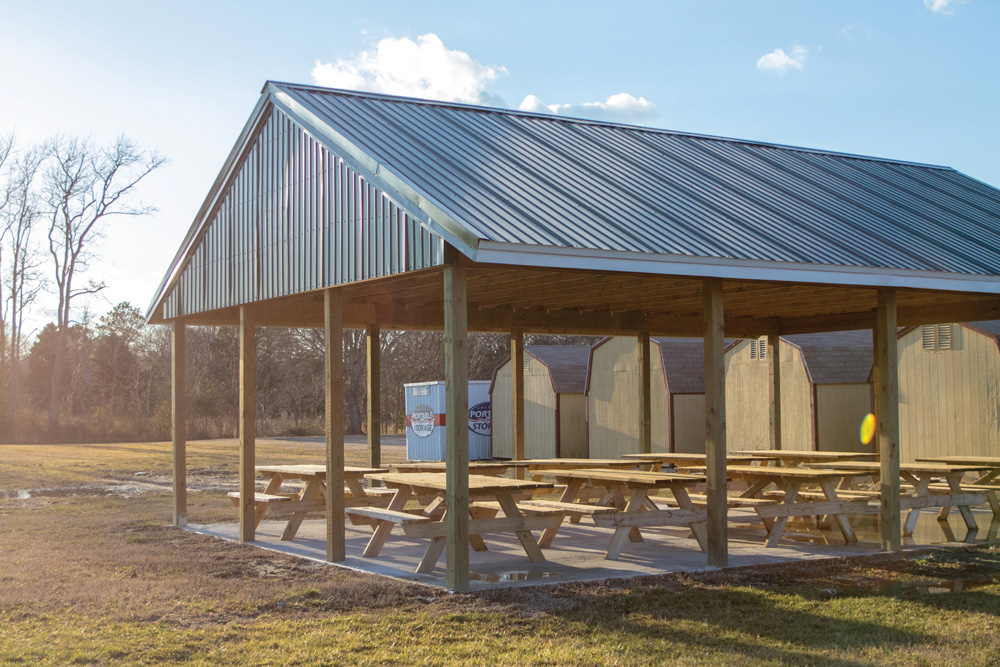 “We started planning the project around the fall of ’17 but we didn’t start working on the project until the spring of 2018,” recalled Christopher. “We were on a camping trip at Ingram’s Pond, and I thought it would be a good idea to make a pavilion for the little chapel area there.

“I talked to one of my mentors, Dr. Don Hattier, and my dad, about it and they both agreed it would probably be better to do it somewhere closer to home.”

Christopher approached his place of worship, Mariner’s Bethel United Methodist Church, to see if they would be open to his building a pavilion.

“They were really grateful for me wanting to do the project. They were going to do a pavilion anyway with the new Hope Center. They saw the pavilion and were like, ‘Thank you for doing it for us.’”

Christopher began the project in April of last year and completed it in November. The pavilion is 25 feet by 35 feet, and 18 feet tall.

Christopher had to write out a plan and submit it to the Boy Scouts of America’s Del-Mar-Va Council for approval. He would later have to work with the Town of Ocean View and Sussex County government.

Christopher also had to hit the pavement and seek donations to pay for the project. He received donations from NVHomes, Contractors for a Cause, the Lions Club, Matt Smith of Rent Equip, Tim Altemose of Coastal Applications, Tull’s Metal & Lumber Supply, Atlantic Concrete Company and Clarke Droney of Droney Marine Construction. Overall, Christopher was able to gather $15,000 in donated materials and financial donations.

He offered special thanks to the Carl M. Freeman Foundation for their generous support.

“I’m so grateful. They’re one of the biggest donators I got throughout the project,” he said. “All the individual donors and volunteers who helped me through the process … they were [a significant] reason this was able to happen.”

Christopher also thanked his family, who he said has supported him throughout the project.

“Family was definitely the driving force. They want to see my greatness and success through life, so they were really pushing me to get my Eagle,” he said, adding that he will be the first in his family to receive the rank of Eagle. “It felt amazing having so many people support me. It showed me how one insignificant kid can make such a difference in the community.”

Christopher is currently a Life Scout, and has one merit badge left to complete before submitting his Eagle project to the Council for review and approval.

“Everything was a learning experience,” he said.

Aside from scouting, Christopher keeps busy playing football, weight training and being a member of the CRASH youth group, and he was recently inducted into the National Honor Society.

“I was asked to be a part of the FACES Board for the [Carl M.] Freeman Foundation,” he added. “They have some college students on their board, along with a high school student… I was generously asked to be that high school student. We’re going to be working together to [review grant applications and] figure out what small [organizations] to give grants to.”

Scouting for the last decade has been a fun extracurricular for Christopher, he said — not just because of the ski trips or camp outings, but because of his friends.

“My favorite moment in scouting is not any camping trip or amazing hike — it’s the company. It feels like a family to me. Whenever I’m at scouts, whenever I’m with the other boys, it feels like there’s a kinship, a brotherhood there. I’m just really happy I can be a part of it,” he said. “I guess I just liked the idea of boys coming together to do great things.”

Christopher’s father, Tony, who was also a Boy Scout (although never made the rank of Eagle), said he was proud of his son’s accomplishments.

“I’m a very, very proud father. Not too many fathers get to say their sons are working toward Eagle or got Eagle, let alone Honor Society, plays football… I’m just very proud.”

Community involvement, even at a young age, is important, said Aidan Christopher, noting that one person can make a big difference.

“It’s good for youth to help out in the community and be a part of their community, because there are places around the world that are not the brightest, and I feel like if youth were to put themselves out in their communities and help, it would bring the best out in the world.

“I would like to thank Mariner’s Bethel for letting me make the project for them,” he added. “It was a really tough process, and I’m really thankful.”