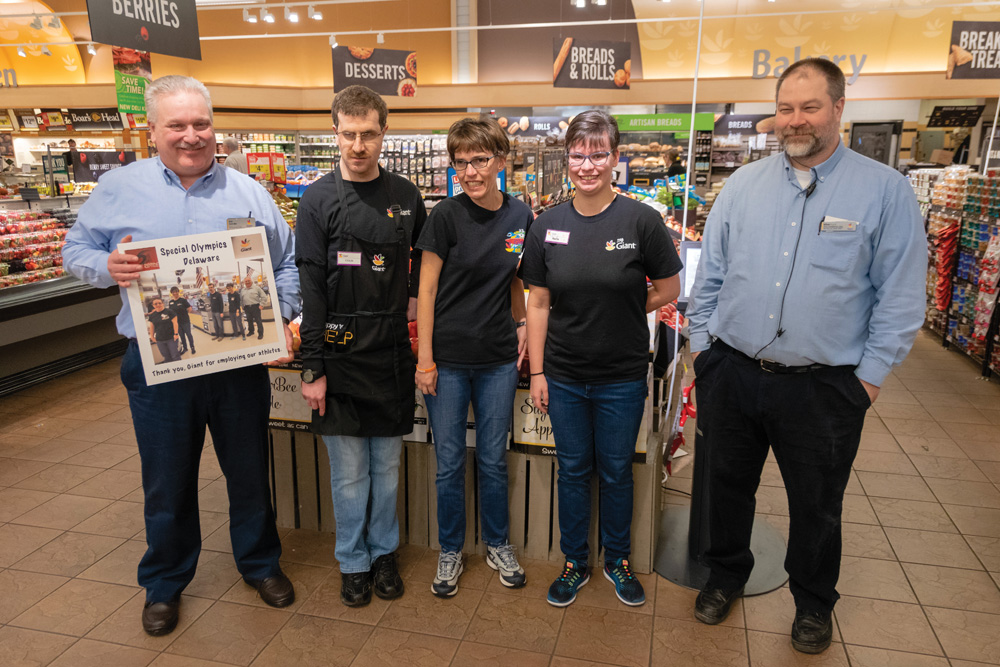 Wanting to recognize the grocery store for their ongoing support, the athletes recently presented Bob Suttmiller and Mike Hunt, store manager and assistant store manager, respectively, a plaque from Peace of Wood.

“I have fun working here Bob,” said Koehler, who’s been employed at the store since last April. “I think it’s fun… talking to the customers. They’re very nice.”

“When I’m upstairs, I always see what they’re up to.”

Mullen, who has been with the store since 2014, said his favorite part of work is the people.

“I think it’s fun working here. I get to meet new people, and I think it’s just fun,” added Bowers, who joined the Giant team in March 2015.

“They’ve been very good to all of these kids,” said Koehler’s mother, Mary Ellen. “Andrea feels like she has her customers. She worked for 24 years at a store back in Colorado.”

Giant isn’t the only business in the community that supports Sussex Riptide athletes. Sea Colony not only helps raise money for the organization but offers their training facility to the athletes. Since 2013, North Bay Marina has been offering pontoon boat rides to athletes at the Special Olympics Summer Camps held at Camp Barnes. The Delaware National Guard has offered its Bethany Beach training facility to cyclist athletes.

“We used to cycle on Route 1, but that became too dangerous for our athletes,” said coach Tony Gough. “We’re so thankful the National Guard opened their facility to us so our athletes can cycle in a safe place.”

“It’s just nice to recognize the community that helps us,” added coach Marie McIntosh. “And, we love shopping here because we can say hi to them.”

As for the athletes themselves, Suttmiller said Giant was lucky to have them.

“They’re really reliable; they show up when they’re supposed to. The customers very much enjoy interacting with them,” he said. “They do a very good job bagging and cleaning. Katie is an incredible cleaner. She does a great job for the store.”

Suttmiller said it is important to Giant to work with organizations within the community.

“Every store we have probably has some Special Olympics athletes working in them through different programs,” he said. “We go out of our way to get them, because they’re very reliable, they have a great support behind them, as far as their families and the people who work with them. They do a good job.

“It’s our pleasure having them work here. It’s definitely ours. We benefit more from having them here.”