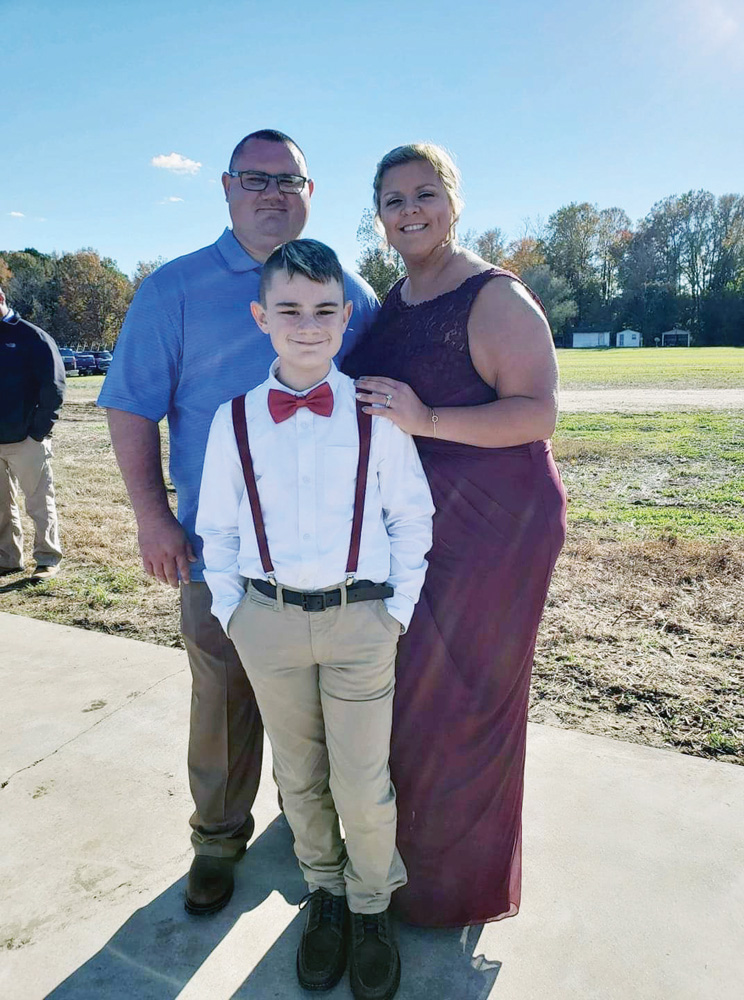 “I lost three weeks of my life.”

That’s how Dagsboro resident Michael Calhoun sums up what happened after he fell out of a deer stand in Federalsburg, Md., on Nov. 25, 2018.

“I stood up and turned around… and we both fell,” he recalled.

Calhoun fell 16 feet to the ground, breaking his left femur “in half,” he said, and suffering other injuries, including a “frozen right shoulder” from trying to catch himself as he fell. Adler was luckier, his dad said.

“He fell in a briar patch.” Because Adler had been bundled up against the cold weather, “he didn’t even get a scratch,” Calhoun said.

The location where they had been hunting was so remote that a four-wheel-drive vehicle was needed to rescue them. Calhoun was initially taken to Nanticoke Memorial Hospital in Seaford, but was later transferred to Christiana Hospital in New Castle County.

His injuries were soon complicated by pneumonia, and he was placed in a medically-induced coma. At his worst point, he was hooked up to seven machines.

“That’s what I saw in the pictures, and that’s what I heard,” he said. In fact, Adler kept track of his dad’s progress by counting the machines; as he improved, the number dropped.

While he was in the coma, Calhoun’s wife, Johanna, kept a journal and took pictures, so he would understand what he had been through when he regained consciousness.

Before the accident, Calhoun was a wastewater operator for the Town of Millsboro’s Public Works Department.

“I ended up losing my job. My FMLA ran out, and they could only keep my job open for six weeks,” he said.

After being discharged from the hospital, Calhoun went to Encompass Health Rehabilitation Hospital in Salisbury, Md. (formerly HealthSouth).

“I was there for a month, learning to walk again,” said Calhoun, who now has a titanium rod holding his leg together. In addition, he is working to regain muscle strength. “I lost muscle because I wasn’t eating” while in the coma, he said. He lost 70 pounds during his recovery.

Calhoun is now in his fourth week of in-home physical therapy.

“I’m getting my strength back, building my stamina,” he said. “I still can’t put my socks on, though.”

He and his son are both beginning counseling to deal with the trauma of the accident, he said.

Rather than being bitter about the accident, Calhoun doesn’t blame anyone and said the deer stand had been used earlier in the season with no issues, so there was no reason to doubt its safety. “It could have happened to anybody,” he said.

Meanwhile, as he continues to recover, Johanna is working two jobs to make up for the lost income. Friends and family have organized a fundraiser on Saturday, March 23, at the Millville Town Center, with food, a silent auction, a 50/50 raffle. While ticket sales have closed for the event, the family is still accepting donations for the auction, Calhoun said.