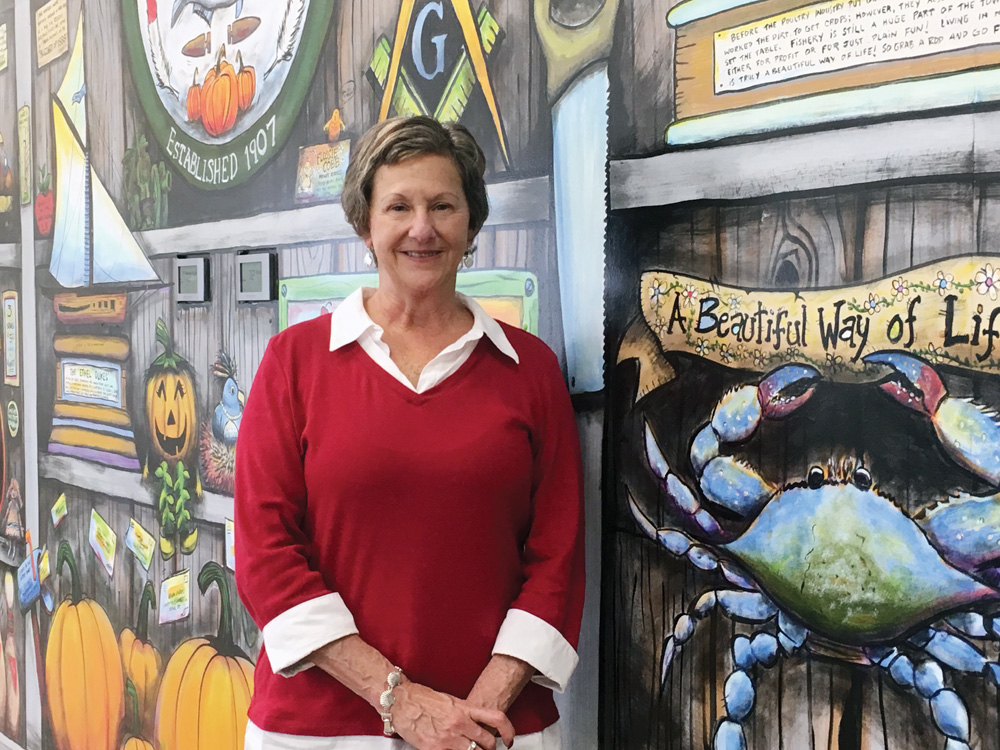 Sharon Brienza had a five-year plan.

The new Millville resident and longtime township clerk in her home state of New Jersey figured she’d consider wading back into municipal government in some way once she’d lived in Millville for a few years.

That was two and a half years ago. But when Millville Town Council Treasurer Susan Brewer announced her retirement at the end of 2018, Brienza’s timeline moved a few spaces forward.

The New Jersey native had moved to Millville with her husband, Rich, she said, after a search for a retirement spot led them to Millville By the Sea. Brienza partially blamed “New Jersey and their taxes” for their departure from their home in Bound Brook, N.J., after a lifetime in that area.

“We knew we couldn’t retire in New Jersey. We’re beach people; we love the beach,” she said, and when the couple attended a retirement expo in their home state, “there were vendors from Delaware. We thought, ‘That’s interesting. We hadn’t really thought about Delaware,’” Brienza said.

The Brienzas had initially looked farther inland, in the Millsboro area, but found Millville more to their liking — less traffic and closer to the beach, she said.

What drew them to Millville By the Sea, Brienza said, was the plans the developer had for the community in the future.

“We just really liked it,” she said. They kept looking at other communities, “because, me, I’ve got to make sure,” she said. “We just loved Millville,” she added.

Still, the adjustment to their new life was “tough,” for a few months, she said.

“I loved the job that I retired from, so it was tough adjusting to not working and not having a schedule every day.” Brienza had been the township clerk for Branchburg Township, N.J., for 29 years.

“But I adjusted pretty quick, I think,” she said with a laugh.

Having come to Delaware some before moving to the area, Brienza said, she and her husband got to know their neighbors as well as the area in general, “so when we moved in, it wasn’t like ‘OK, what do we do now?’” she said.

Many of her new friends, she said, attended her swearing-in as a new council member on Tuesday, March 12.

As a former township clerk, Brienza is well-versed in all the minutiae of town government. In fact, in recent years, she taught a class in municipal finance for Rutgers University — one of five required in New Jersey for certification in the field.

Since moving to Millville, Brienza said, she has come to town council meetings and Planning & Zoning Committee meetings. She was especially interested to attend the meeting last fall in which the Town’s new comprehensive plan was introduced.

“It was very interesting,” she said.

Growth, she said, is what Brienza sees as Millville’s biggest challenge going forward.

“There’s so much open space where there’s just houses and houses going up. I’ve seen it just in the last five years” since she and her husband began the process of moving to Delaware.

Brienza is familiar with growth issues, she said, because even though Branchburg is a “much larger town” than Millville, “we had lots of farms, and we went through growing pains there, too, with new industry… and lots of housing.”

Back to that five-year plan.

Brienza said she was hesitant to run against an incumbent council member, “because I think the town is run very well and I didn’t want to split the council up.”

When Brewer’s seat became vacant, she saw that as an opportunity to pursue a leadership role in her new hometown. Before that, however, she had applied for one of the spots on the newly expanded Planning & Zoning Commission.

“So I figured, if I don’t get council, maybe I’ll get Plannning & Zoning, and have a foot in the door and start working my way up,” she said.

“Local government is just… where everything starts,” she said. “I just loved it. You can’t do something for 29 years and not love it.”