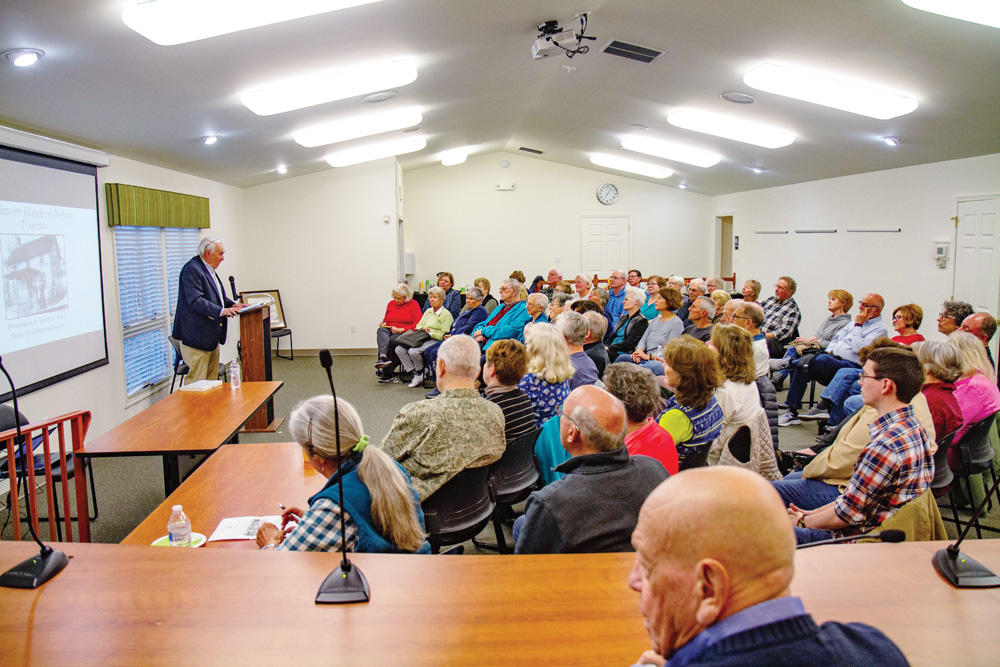 Where did the term “Baltimore Hundred” come from, and why do we today use this term to describe Southeastern Sussex County?

Local history advocate and former Ocean View mayor Gordon E. Wood answered these and many other mysteries during his April 3, public lecture at the Ocean View Historical Society.

Just as had been done in England, assessment boundaries were designated as “hundreds” because when drawn each had 10 families, with each assumed to have 10 people, including servants. This was carried over in Maryland as early as 1636. Our Baltimore Hundred was established as a subdivision of Somerset County in 1697.

It started with Walter Evans, who came to Delmarva as an indentured servant for perhaps four to seven years as a way to pay for his transportation from Wales to America — the story of many immigrants to Delmarva. Such service could be difficult, because indentured servants served for a time certain, as compared to slaves, who served for their lifetimes and were, therefore, more valuable.

Walter and Mary Evans came to South Bethany in 1702, when he bought 430 acres for 9,000 pounds of tobacco, the currency of the time.

Baltimore Hundred is bounded by the Indian River and bay to the north, the Atlantic Ocean on the east, the Great Cypress Swamp to the west, and the Assawoman Bay to the south, where the actual boundary of Lord Baltimore’s Maryland and William Penn’s Pennsylvania was contentious and challenged for over a century.

The geographical isolation of Baltimore Hundred restrained population growth, and Baltimore Hundred was frozen in time from the early days until tourism, such as the Christian Church retreat in today’s Bethany Beach in the very early 1900s. Major tourism was restrained until the 1935 DuPont Highway and the 1952 Chesapeake Bay Bridge.

Wood described the extended and contentious struggle to determine if Baltimore Hundred was part of Maryland or Pennsylvania or (eventually) Delaware. The Penn/Lord Baltimore issue was unsettled; there were even border skirmishes. An appeal was made to the Crown in England to settle the issue.

After the creation of a commission, due deliberations, surveys, agreements to agree, finally, an agreement was made to establish the boundary at Cape Inlopen. Even this included a level of chicanery, because the agreement was actually for Cape Henlopen. The location of a false cape at Fenwick established the boundary.

The question regarding “The Three Lower Counties on Delaware,” a part of Penn’s Pennsylvania, was settled on July 4, 1760, to be a part of Pennsylvania with their own assembly. Then, in 1775, the assembly of these three lower counties claimed to be a separate state under the Articles of Confederation. They got away with it, and Delaware became a state in 1787, when the Constitution was approved.

Delaware was not only a state in the United States, but Baltimore Hundred was not to be eventually a part of Maryland’s Ocean City. Baltimore Hundred should celebrate July 4 as Independence Day — nationally, and as being in Delaware, not Ocean City, Md!

During the Civil War, Sussex County families were torn apart by allegiances to both the North and South. Many Baltimore Hundred men joined Company D of the 6th regiment of the Union Army as “nine months men.”

Gordon Wood’s great-great-grandfather John A. Evans was a corporal. The regiment served at Havre de Grace, Md., guarding an important transportation route, and later as the guards at the Union prison at Fort Delaware where many prisoners died of disease and malnourishment. It was about as bad for the guards. The regiment lost only one killed in action during their service.

Even though the economic viability of slaves waned by this time, some families still owned slaves. It was a difficult time. Lincoln’s Emancipation Proclamation freed slaves in rebel states, but it did not apply to border states. The Thirteenth Amendment in 1865 freed the remaining slaves.

Wood displayed a visual of the 1785 Estate Inventory of his ancestor John Evans Sr., which listed all his worldly possessions. The first two items were “Family Bible” and “Child’s Bible,” and the list continued to show the first names of eight slaves, male and female.

Large family farms had slave quarters, a main house, barn, orchard or family garden, and fields for crops. A water source, and a location near a bay or creek improved land value and permitted water travel for commerce. Wood displayed a treasured drawing by noted Delaware historian Dick Carter of a prosperous 1800 local farm.

In writing his two books, Wood researched his family tree, which included Evans, Hall, Dazey/Daisey and Green ancestor lines. Because Baltimore Hundred was “frozen in time” by water barriers and border disputes, it took longer for the area to attract settlers. But once a family came, they stayed and intermarried within the small, but slowly-growing community.

Wood reported with a smile that he “is related to himself eight different ways, which explains a lot.”

The Hall Family, one of the early homesteaders, ran a country store that became the hub of Baltimore Hundred — for mail, news, household supplies, clothes and social interactions. People gathered at Hall’s Store, where everyone knew everyone and most were related to each other. The Hall family also maintained a late 1700s school house north of Salt Pond, which may have been the first in the area.

Wood explained that the area now called Ocean View evolved under different names through the centuries. In the 1600s, the area was called “Seaboard Side,” as designated on a Somerset Co., Md., map. By 1742, maps called it Ocean View and “Muddy Neck,” and by 1850, it was called, “Cedar Neck.” In the mid-1800s, maps clearly marked the area as “Hall’s Store,” which it remained until the Town of Ocean View was officially chartered in 1889.

Early life in Baltimore Hundred was hard, but quality of life was good (if one was strong). Men worked as seamen and farmers; women worked to loom and sew, churn the butter, plant the household garden, cook the food, tend the livestock, and work in the fields when needed (not to mention having a baby every other year).

Wood explained that the southeastern Sussex County dialect is a combination of Victorian English, Scots, Welsh and slave (African and Caribbean) dialects. The Sussex County accent is very similar to that of the people of Smith Island, Md., and it remained prevalent in the area through the first half of the 1900s or later.

Wood related stories about hitchhiking to the Bethany Boardwalk as a kid, visiting Pop Parsons’ Store, finding native Indian arrowheads in his daily explorations, as well as some Kul Klux Clan items. He described the unlimited supply of oysters (40 bushels a day) and shellfish, and explained how our inland bays have been damaged by environmental malpractice.

He described houses and stores that were never locked. He showed illustrations of two-masted schooners that routinely docked in Vines Creek, Whites Creek, Dazey/Daisey Landing and at Pennewell’s Landing dock. He also offered an overview of local religion and churches, local festivals like “Homecoming,” during the first week in August, and the legal status of women.

Wood concluded his talk by reading entries from the 1797 Last Will & Testament of Catherine Wharton Evans (another ancestor) that detailed a poignant litany of gifting, including “my best dress,” “my Sunday bonnet,” “my silver shoe buckles and sleeve buttons,” “my apron,” to her six grand-children, by name.

Barbara Slavin, president of the Ocean View Historical Society, thanked Wood for his extensive historical knowledge, and for his willingness to share with such enthusiasm and expertise.