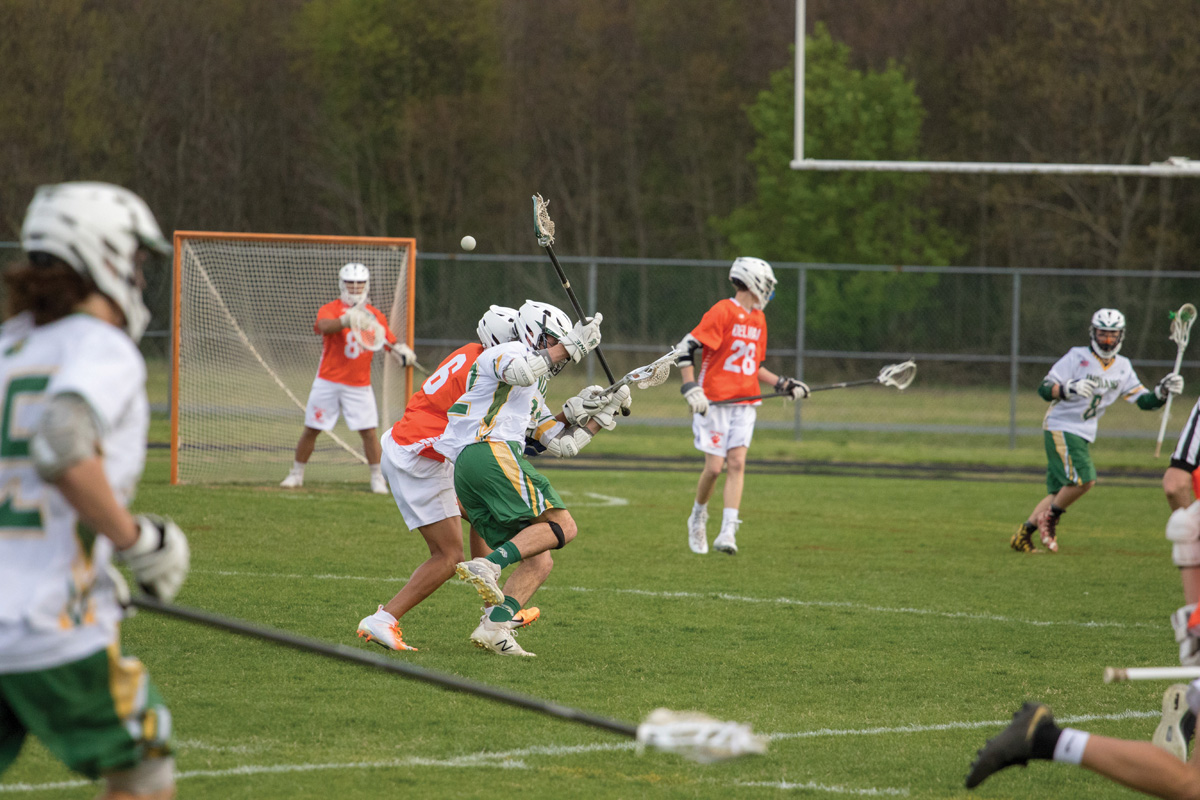 Six straight W’s for the Indians

Winning breeds confidence, certainly, but in order to be successful consistently, one often must possess a fire and desire — plus a mental toughness to fight through adverse situations throughout the course of a game.

The Indian River High School boys’ lacrosse team exudes all of those traits right now, and they have helped spark the team to six straight wins with an 8-3 decision over Woodbridge on Monday, April 15.

Thomas Harris led the way with a hat trick, and Dylan White added a pair of goals as the Indians continued their winning ways against another South Division opponent. Ben Spencer, Zach Schultz and Ryan Furman each chipped in with one goal apiece to help the cause.

“I do believe that winning is a big part of it,” head coach Dave Spencer said of his team’s confidence level right now. “Everything is good when you’re winning. That instills confidence in each other, and the overall game plan.

“But equally as important is that they have a mental toughness and a resolve that is second-to-none. They know that if they execute well, we can win every game we play. It won’t always be easy, but they keep grinding, and that’s been huge for us.”

The game plan against Woodbridge was ball-control and precision-passing to set up their offensive sets, which helped IR take a 5-2 lead into the halftime intermission.

The defense was also stellar in this one as they shut out the Blue Raiders in both the second and fourth quarters.

“As a coaching staff, we’ve worked hard to prepare for this,” Spencer continued. “We knew that if we played well and prepared thoroughly, that by the second half of the season we would be in the running for a conference championship. And now here we are — ready to compete and finish strong. Now we just have to go do it. It’s going to be a fun next couple of weeks for Indian River lacrosse.”

Schultz added three assists to his stat line, with Reese Stone recording a helper as well.

Goalie Sam Miltner made eight saves between the pipes to pick up the win. IR had 45 shots in the contest.

On Friday, April 12, the Indians stormed out of the gates with six first-quarter goals and added another two in an 8-5 win over Delmar.

Harris again had a hat trick, and White also had another two goals. Ben McCabe recorded a pair of goals as well, while Ben Spencer chipped in with a solo tally. White (2), Schultz (2) and Luke McCabe (1) each were credited with assists.

The Indians head into the spring break riding high on wave of confidence, and now have 11 days to continue to work on honing their skills and fine-tuning the things that have been working well over the course of the first nine games. They have six games left, and their eyes on the prize of a conference championship and state playoff berth well within reach.