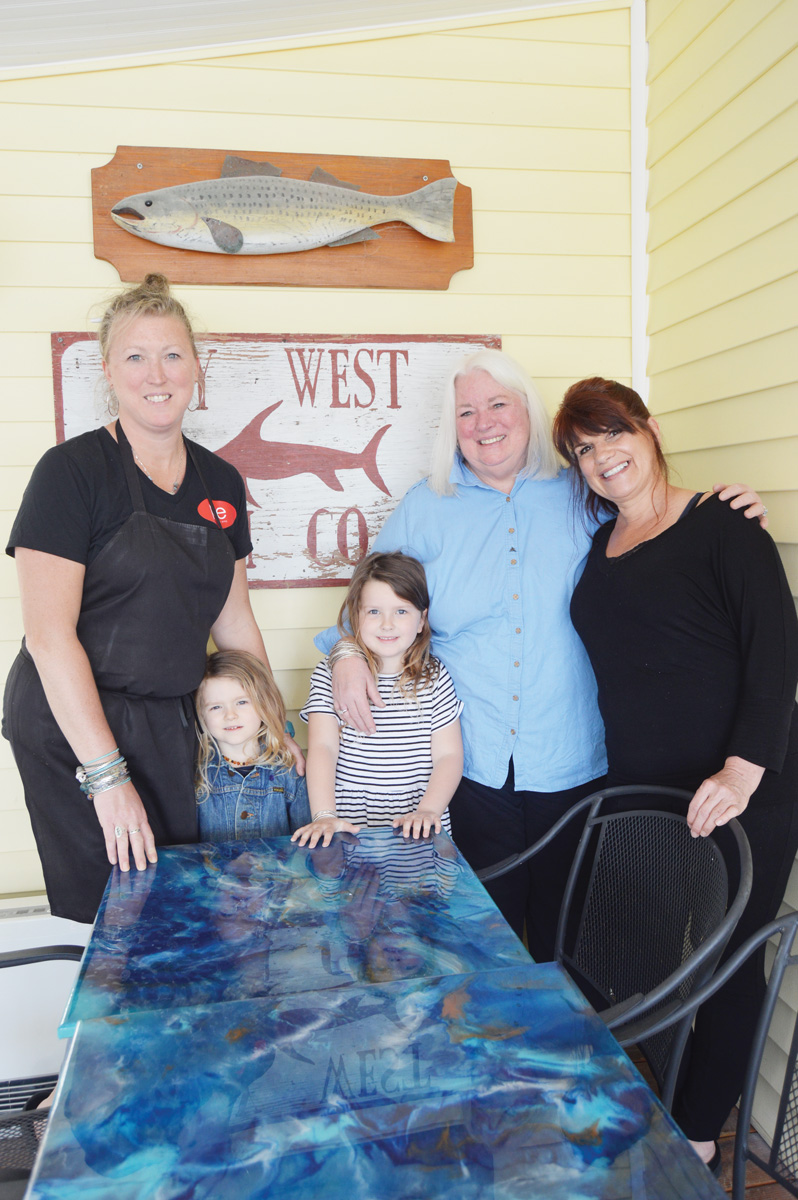 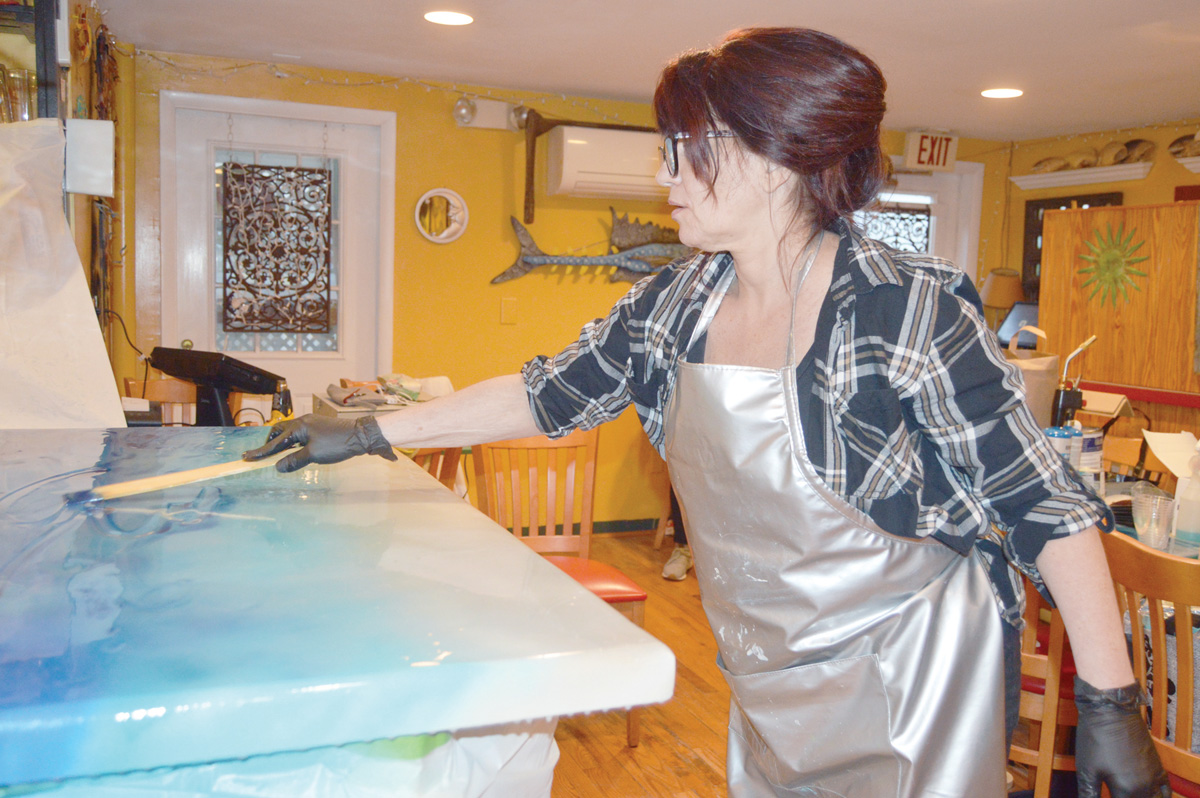 Willow and Luna Lewis danced around their grandmother’s restaurant on an April afternoon, twirling their spring dresses and laughing.

But the girls, ages 6 and 4 respectively, were all business as they placed silverware carefully wrapped in red cloth napkins on tables at Patsy’s in Bethany Beach. It was opening night — the first night the restaurant reopened after the winter.

It wasn’t just any opening night. This year, Patsy’s celebrates its 20th anniversary. The restaurant opened as a mostly carry-out established in June 1999; it was originally called Patsy’s Gourmet.

The girls are the third generation to put their hands to use at the restaurant; their mom, Robin Rankin, is now head chef as founder Patsy Rankin takes on more of a behind-the-scenes role.

Not only has Robin Rankin followed her mom into a lead role in a restaurant, she also followed her education as a chef. Both women are graduates of L’Academie de Cuisine Professional Culinary School in Gaithersburg, Md. — Patsy after decades in other businesses and Robin a few years later as a passionate cook and an adventurous eater whose desire to experience different cuisines had led her to travel the world in search of new flavors.

The menu at Patsy’s reflects the fusion of the mother-and-daughter team — including the Key West classics that are Patsy’s favorites, as well as Asian-inspired dishes that reflect Robin’s global inspirations.

Born and raised one of six children in Washington, D.C., Patsy Rankin split her time between there and Bethany Beach beginning in the 1970s when she married Kirk Rankin. She owned kite and toy stores in Bethany Beach and Rehoboth Beach before deciding to pursue her passion for food. Her varied experiences in the working world included, among other things, working on a tugboat in Washington, D.C.

“We delivered sand and gravel to a concrete company,” she said.

As Patsy Rankin looks back on 20 years at the Campbell Place location, she is surrounded by the restaurant’s new look — a new bar top and outside tables now bearing shiny new resin tops, hand-poured and crafted by another familiar face at the restaurant for patrons who have visited in the past year.

Kathy Wood joined the Patsy’s staff as a bartender last year as a part-timer, and now that she has literally poured her own bar, she’s right at home in an expanded role at the restaurant as “main bartender.”

Wood spent much of the winter updating the small L-shaped bar and the 18 tables on the porch at Patsy’s with a beach-inspired theme. The idea of the collaboration with Rankin on the project came up pretty naturally Wood said.

“I noticed the tables on the porch needed to be repainted,” she said.

So, on a chilly day in the middle of the winter, Wood, Patsy and Robin Rankin, and Rankin’s young daughters gathered to watch Wood work her magic.

For several hours, she mixed, smoothed and poured layer upon layer of clear and tinted resin, each pour resulting in a deeper, more complex design. The result is a bar that brings to mind sandy beaches and deep blue ocean, and porch tables that are bright, artistic and full of life.

For Patsy Rankin, the 20-year-mark serves as a time to look back at where she started, back in 1999. “When we first opened up, we were more of a prepared-food place,” she said, where vacationers could stop in and pick up crabcakes and other beach delicacies for a picnic on the beach or dinner back at their home away from home.

“We had seating outside. We did that for a couple of years,” she said. “People kept saying ‘You’re too good for this,’” and eventually the take-out counter disappeared and Patsy’s evolved into a full-service restaurant. “We heard it so much, we had to do it,” she said.

That was a bit of a shock to Patsy, who said, “I never wanted to open a restaurant.” Today, she defines Patsy’s as “fine dining, but casual,” where diners can choose between porch seating or white-tablecloth indoor dining in the former beach cottage that was several other restaurants in the years before Patsy’s was born.

“Everything is made from scratch here,” from the pie crust to the breads that became Patsy Rankin’s specialty, to the fresh fruit salsas. Even the rolls for Patsy’s lobster BLTs are made on the premises. The menu changes according to what ingredients are available fresh and local at any given time.

These days, Patsy Rankin said, she is happy to hand over the kitchen duties to Robin.

Patsy still keeps her hand in the management of the place, as well as being Willow and Luna’s favorite babysitter while their mom is in the kitchen at the restaurant and managing her own establishment, the Bethany Beach pizzeria called Pie.

In the summer, when they’re not in their grandma’s pool, the girls are either doing art projects or learning to cook (for example, Willow recently learned how to prepare a soft-shelled crab). Of course.

Patsy’s restaurant is located at 121 Campbell Place, Bethany Beach. The restaurant is currently open weekends from 5:30 p.m.; starting in May it will be open seven days a week, through September. Patsy’s traditionally stays open until New Year’s Eve, when they close out the year with with two dinner seatings, both of which are usually sold-out affairs.

For more information, call the restaurant at (302) 537-2433 or visit the website at www.patsysgourmet.com.