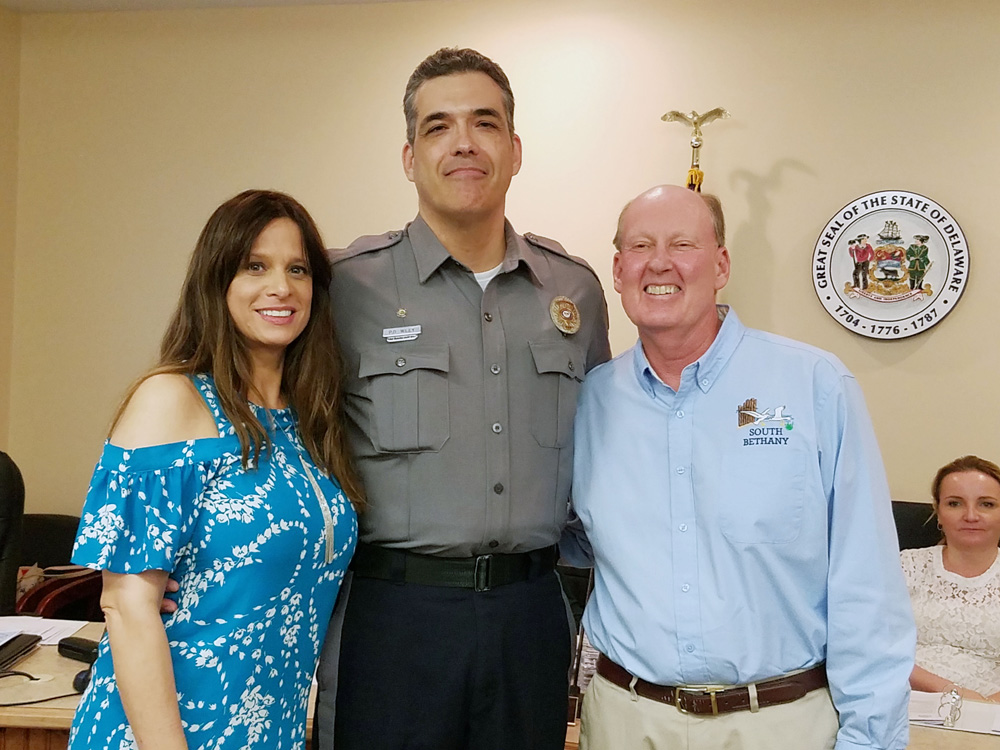 Sgt. Patrick Wiley received a standing ovation when he faced the public at the April 12 South Bethany Town Council meeting, as officials and residents honored his promotion from corporal, the only fulltime officer still on patrol.

“We are definitely taking steps to provide police services the town deserves and expects,” Wiley told Coastal Point. “We’re working very hard to get people in here … we are definitely doing as much as possible.”

Wiley wasn’t interested in discussing the departure of five officers and the police chief since early 2018.

“My concern is to move forward and rebuild the police department. That’s water under the bridge, and I’m focused on the future,” Wiley said.

“I wanna thank the sergeant for all his excellent and hard work he has done since taking this role,” said Mayor Tim Saxton. “He has stepped right in and provided needed leadership for the department and demonstrated a sense of urgency” to continue police operations and administrative work. “We are very lucky to have Sgt. Wiley serving this town,” Saxton said.

Wiley started in South Bethany in July of 2010 and became a corporal in 2014. He is a department-certified firearms instructor and public information and tactical officer, who is also responsible for managing the department’s equipment and weapons.

He previously was a sworn officer at Delaware State University and served 21 years in the U.S. Air Force, before retiring in 2007 as a superintendent of intelligence and investigations. He served all over the world in various leadership, security and police activities, including six years at Dover Air Force Base in protection, quality control, training and investigation.

The public was also introduced to the new temporary administrator of SBPD, Michael J. Carroll.

He will guide the police department for the next few months, working 30 hours a week as a “contractual public safety consultant.” He will administrator the department; oversee the day-to-day operations; recommend changes and procedural adjustments; and help recruit and hire officers and a permanent chief. He will not be considered a regular employee or a sworn officer. Now retired in Millsboro, Carroll brings 40 years of law enforcement experience, mostly in Pennsylvania, including police chief, instructor and president of local and national police groups.

Everyone (from town council to the police staff) has emphasized a desire to rebuild quickly, but also to take the time to hire quality officers.

“And then we’re going to move into hiring a chief of police who you’re going to be proud of when we bring him in here to swear him in,” said Carroll. “I’m optimistic that in a short item you’ll see great improvement in the services this department is able to render to you.”

Carroll invited the public to telephone him at the police department (302-539-3996) to learn more.

SBPD is collecting applications and has already hired two men.

Killian Klopp comes from the Memphis (Tenn.) Police Department. He won’t be patrolling until he’s certified by the Council on Police Training (COPT) and then completes several months of South Bethany ride-alongs/field-officer training.

“Right now, his main responsibility is learning as much as he can,” said Wiley.

Besides working at SBPD in an administrative capacity, Klopp is training as quickly as possible, sometimes with other municipalities. SBPD was recently trying to enroll him in Dewey Beach’s certification training for seasonal officers, so he could work SB streets in a limited capacity.

To fill the gaps, South Bethany will hire local police departments and possibly a security force.

Delaware State Police charges a flat rate of $91 per hour. Ocean View Police Department agreed to charge 1.6 times an individual’s wage, plus $25 for use of car. (Fenwick Island Town Council is also expected to discuss a hiring agreement.)

“We have developed a roster of hours we want covered. There’s no guarantee for what hours will be covered because they bid for it,” Saxton said.

Officers looking for overtime can log into a shared mobile app or website to claim shifts of four or eight hours.

South Bethany also intends to swear in the Ocean View (and potentially Fenwick) officers as South Bethany officers, so they have the authority to work in town. So, while wearing the OVPD insignia, the officers can log into any police database as an SBPD worker.

“I cannot believe the partnership that’s going on. It’s amazing,” Saxton said of the local partnerships. “Having worked with them, I’d do it for them if they were stuck in the situation tomorrow … We are very fortunate to have a group of communities willing to work with us.”

Saxton also reminded the public that the town council has worked for months to bring a new solution.

“Not one time did we flinch. We have sat here … and taken abuse from the audience, had misinformation spread, and I think there has been a real disservice,” he said. “We are on our way to having a good police force … we are on the right track.”