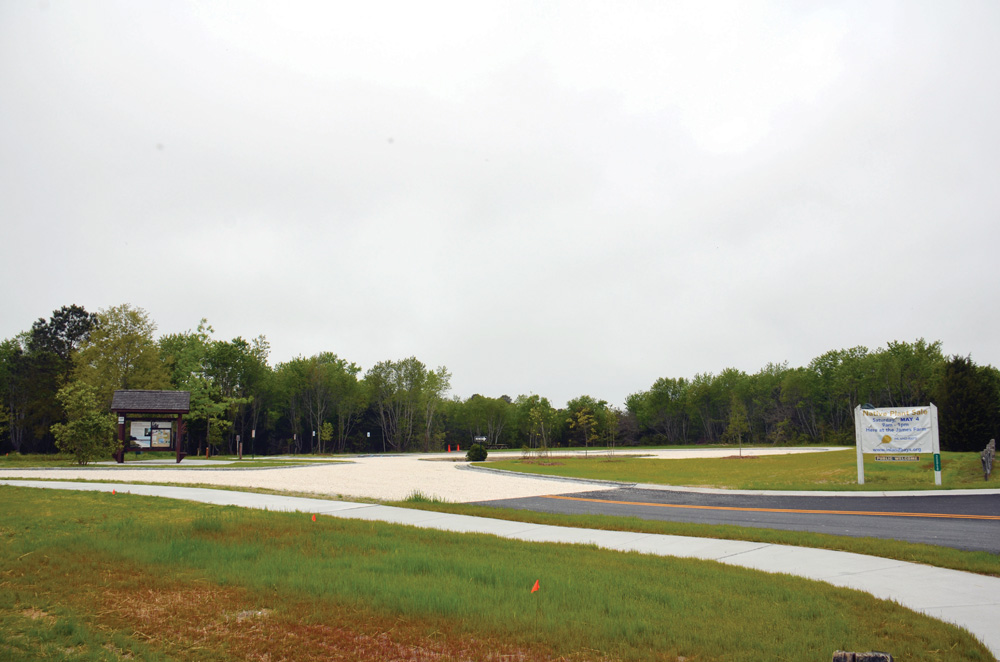 Sussex County first leased the property to the Center for Inland Bays in 1998, and went on to grant a 20-year extension on the lease in 2017.

Needed improvements to the site to accommodate the growth were laid out in 2016. The design and permitting for the Master Plan’s Phase I Improvements, was completed in August 2017. Subsequently the County, on behalf of CIB, applied for and received an Outdoor Recreation Parks and Trail Grant through DNREC in the amount of $85,000.00, which the County matched with FY 18 funds.

“We have been working with the CIB as the construction manager and also as the applicant because we are the owner of the property,” said Medlarz.

The council was asked to approve a change order for the amount of $5,165, which would include various signage for the parking area, striping for ADA parking, crosswalk striping, bringing the final contract cost to $372,102.50.

Councilman Sam Wilson asked why a clamshell cover was chosen for the parking area.

“The Center desired to have a somewhat pervious pavement, which when you go past the DelDOT right-of-way where pavement was required, they opted once you come into the circular parking area to have a clamshell surface,” said Medlarz. “That’s why we didn’t have any striping in the project other than the crosswalk and the handicapped parking, which by law has to be paved. It’s a natural look for reasons of a somewhat pervious surface in the inland bays area.”

Wilson said small stones would’ve been a better choice for the parking area.

“I have advised the director of the center [Chris Bason] that this will be a continued maintenance item, and he assured me he could get free clam shells or oyster shells, and has volunteers to spread it. I have this in an email,” added Medlarz. “I will remind Mr. Bason if it comes up that we are not responsible to maintain his parking lot.”

“Who creates the master plan? Who’s driving that?” asked Rieley.

“It’s mostly the center, Councilman,” said Medlarz. “We as the owner have to submit the master plan for the approval by DNREC but we were not the driver in developing the master plan concept. It was more based on the intended use of the facility. And since we are not the ones using it… the lawn, the kayak rentals, the trail system. All these things are associated directly with the operations and have nothing to do with the ownership of the land, which we hold.”

Reiley brought up concerns about erosion he saw first-hand during the visit.

“We noticed pretty significant erosion on the peninsula that abuts out and in the eastern portion. It looks like the bay has broken into the marsh area and there’s been some saltwater intrusion. I’m not a big believer in global warming and sea level rise, nevertheless I know erosion occurs. If they’re having issues with that, and it’s impacting the property which is county property, is there anything to remedy that?”

Medlarz said the CIB is working on a living shoreline project with funding from DNREC.

“They have recognized that issue and they are trying to address that issue. They have installed some experimental living shoreline pieces. That’s a multi-phase effort to stabilize it,” he said. “Some erosion will be inevitable. I think the shoreline will not look like this in 50 years.”

Rieley said during the tour, he noticed the boardwalk that traverses the wetlands is elevated, without guardrails.

“There’s a potential hazard there,” he said. “I don’t know if we’re liable if there was ever an injury there.”

Medlarz said he was not the county engineer when the lease agreement was developed, but would assume it has a liability clause in it. He said staff would look into whether or not such a clause exists.

“With or without a liability clause in the agreement, it will always come back to the County because we own the land and we would be viewed as a resource,” added County Administrator Todd Lawson.

Council unanimously approved the change order with a vote of 5-0.