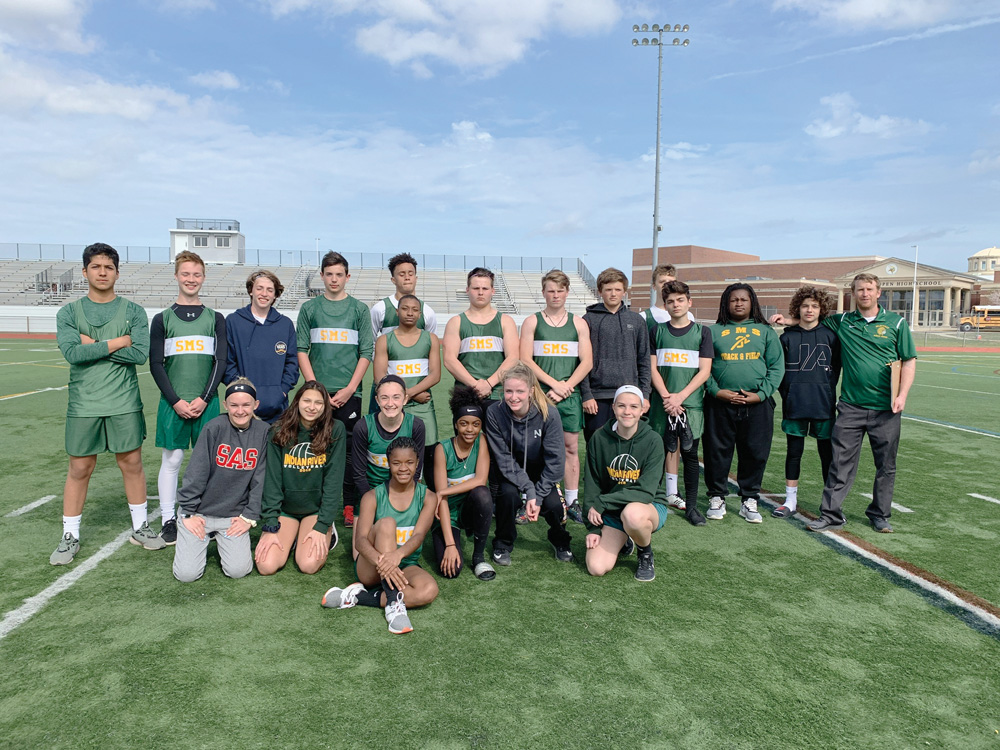 Three words that describe the season for the Selbyville Middle School boys’ track-and-field team in 2019.

And, putting in a solid season, the SMS girls’ track team finished with a 6-2 record.

“We truly have an exceptional team,” head coach Brian Benner said, speaking about both his boys’ and girls’ teams. “As coaches, we hold our athletes to a high degree of hard work, character and sportsmanship. They have met the challenge. I am confident we have student athletes that have a changed outlook in what they can accomplish, on and off the track.”

Cole Brickman ran an 8.2-second 55-meter hurdles to win that event for the Indians. Ashton Stephens also was victorious, with an 11.9-second 100-meter sprint in the finals. The boys’ 4-by-100-meter relay team posted a winning time of 48.1 seconds, edging out second-place Milford by 0.3 seconds.

In the field events, Hayden Hall cleared 5-feet, 4 inches to win the high jump, while also winning the triple jump with a leap of 37 feet, 8.25 inches. Hayden Davis rounded out the winning efforts with his 36-foot, 9-inch toss of the shot put. Davis and Jayden Foskey were second and third in the discus.

“We absolutely have more fun than any other team,” Benner added. “When we pack the bus to away meets — you can hear the boys and girls singing and laughing to and from. When it is time to compete, their focus and determination is unmatched.”

For the girls, SMS turned in a fifth-place finish at the Cape Invitational, with 42 points. Postlethwait was first with 101 points, followed by Beacon (71), Milford (49) and Kirk (43).

Aniyah Blake was first in the 100-meters event, with a 13-second-flat time. Alisa Tyre ran to a second-place finish in the 55-meter hurdles event. The 4-by-100-meter relay team was edged out by Postlethwait to finish second.

• “We have shown character beyond comparison as well. Much of the team has worked to raise money for equipment, track shoes, and tournaments. The students and parents created our ability to have the materials and money to compete. Because of their efforts we were able to attend invitational track meets and compete at a high level.”

• “The following is a testament to the character of our team. In our last track meet, one of our eighth-grade athletes [Jonathon Johnson] was looking in the stands, and getting any items our team may have left behind. One of the items he picked up was a fanny pack. Johnathon thought it may have been an item that belonged to a member of our team.

“Another student (Rashad Hopkins) decided to look inside the pack to see if he could find the owner. He found medication, a name and a phone number of a student, who was not on our team. Without prompting or hesitation, he called the number, and talked to the girl’s grandmother to let her know we have the pack, and it would be returned to her.

“This is just example of many that encapsulates our SMS track team, and what we stand for.”

• “The support from our parents has also been instrumental in achieving our goals. Reinforcing our goals as a team and at home with parent support has been a key component to our success.”

• “My assistant coaches are a wealth of track knowledge. We have a lot fun together working to help these kids. It was great to see how much our athletes have improved because of them. I cannot thank coaches Heather ‘Mama G’ Goodrich, John Zirckel and Kevin Reid enough.”