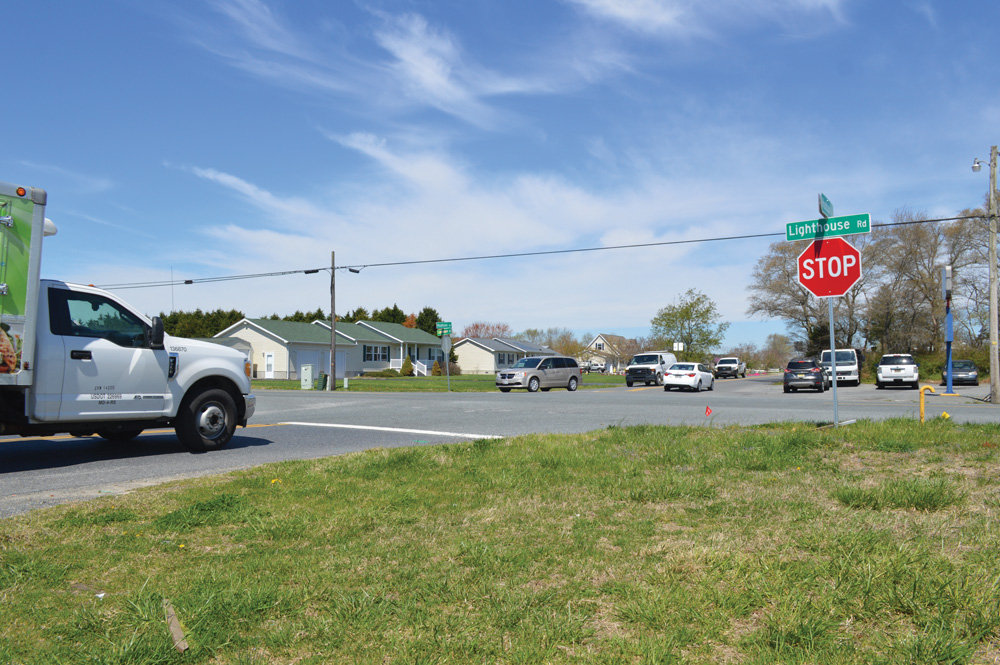 After a recent car collision on Route 54 in broad daylight, Selbyville Police Chief W. Scott Collins is reminding drivers to be careful at the Hudson Crossroads.

In the recent accident, while heading northbound on Hudson Road, the driver came to a complete stop at Lighthouse Road, Collins said, but he failed to remain stopped and pulled in front of an eastbound tractor trailer. A passenger in the vehicle died from their injuries.

“He came to a complete stop,” Collins said. “The fatal before this one, they did run the stop sign, and the one before that was a car passing on the shoulder.”

“I reached out to DelDOT again to see if we can do improvements,” Collins said of the Delaware Department of Transportation.

There is a small obstruction for southbound Hudson traffic, but the majority of the accidents are vehicles coming north from Hudson Road, Collins said.

“It’s a huge thoroughfare because it’s the shortcut from Maryland [to coastal Delaware]. If you’re coming up from Route 113, … it’s a lot of traffic,” Collins said.

“The intersection is completely wide open. You can see clearly in nearly every direction. … And the vast majority of our accidents are daytime.”

So, the answer isn’t necessarily more lighting to brighten dark or hidden corners. Near Millville, on Route 17, DelDOT recently added warning signage on the main road, warning through traffic to watch for crossing traffic (although it’s still up to cross traffic to stop safely).

“We’ve requested additional signage about passing on the shoulder. … We’re actually considering a request for the flashing signs … just to let people know that traffic is crossing,” Collins said.

That intersection will only get busier in the next few years, since two housing developments are planned for two of the four corners.

DelDOT doesn’t see an emergency yet

When state Rep. Ron Gray’s office requested a study of the intersection in March, DelDOT’s only recommended change was to move the signs closer to the intersection, per current highway standards.

“This location has never been identified as a high crash location to be studied by any of our statewide safety programs,” e.g., Hazard Elimination Program, High Risk Rural Roads, etc.), said C.R. McLeod, DelDOT spokesperson.

DelDOT has not done an official traffic study on safety there, but they do review old crash data.

“A review of crashes in the database within 500 feet of the intersection [showed] two to three crashes per year on average, dating back to 2005. The lowest years had one crash and highest years had four crashes.

The Selbyville Police Department has added some traffic enforcement in the area.

Unrelated to that situation, Route 54 is in the midst of a series of road closures for pipe repairs. Contractors George & Lynch Inc. have been removing and replacing crossroad pipes at several locations.

Motorists should also anticipate additional closures on Route 54 later this year, since last summer’s paving project on Route 54 was postponed. DelDOT is expected to resume improvements to the final six miles of road, from Main Street to Sound Church Road.