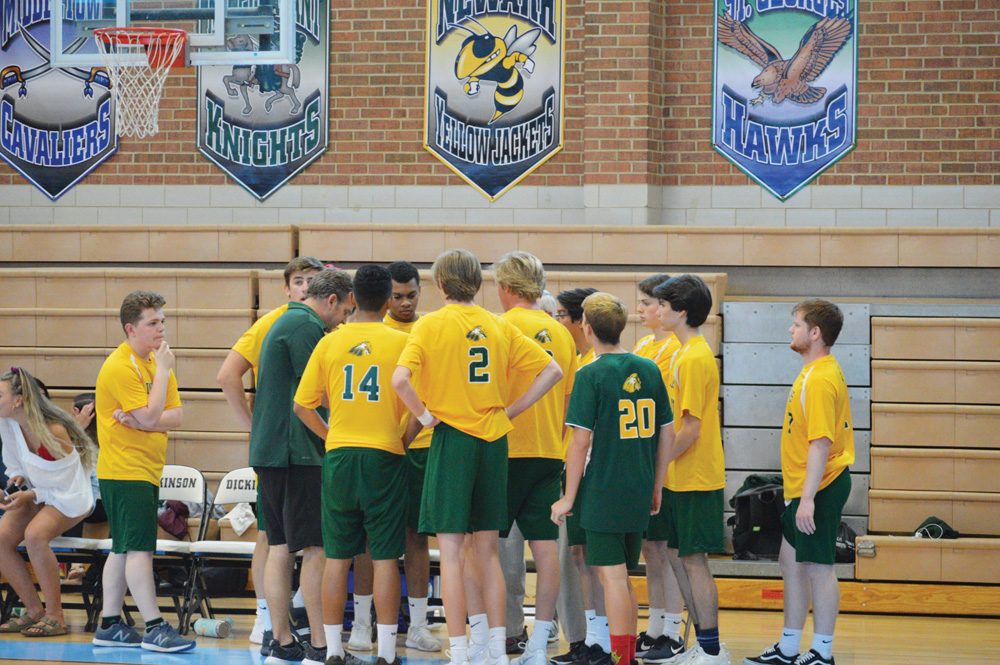 One Team, One Dream

They followed a simple phrase from Day 1 this season: “One Team, One Dream.” Every huddle broke with it. Every match ended with it. They were words the Green-and-Gold lived by, through every boys’ volleyball practice and every game.

The dream? An undefeated season that would end with a state championship.

That dream became reality last Wednesday, May 22, as the Indians cruised to a 3-0 sweep of perennial state power Salesianum at John Dickinson High School in Wilmington.

“‘One team, one dream,’ baby — mission accomplished,” an elated IR head coach Jim Barnes said following the trophy presentation and celebrations. “Perfection, other than the two sets during the season, and we talked about that before the playoffs. Nine sets. Nine sets is all we got, and we did it.

IR once again relied on the “Super 6” — the same six players who have carried them all season, in the form of seniors Michael Barnes, Mitch McGee and Porter Palmer, juniors Alex Canseco and Mason Singer, and freshman Carson Barnes.

Michael Barnes was amped up from the moment he stepped off the bus and played like a guy who would accept nothing less than the championship hardware. He hammered home 16 kills to go along with five digs, two blocks and an assist.

“At the start, we had the ‘one team, one dream,’ and we had the dream to win this,” he said, while smiling ear-to-ear. “Just the thought now of having it be a reality is an amazing feeling.”

McGee brought his solid, heavy hitting to the contest as well, with nine kills, two blocks, a dig and an ace.

“I knew right from the git-go, from the season, that we’d be able to do this,” an extremely confident McGee said. “We worked hard. We practiced hard every day, and we just played together every single game. That’s what happened for us to get the perfect season.”

The first and second sets on May 22 were both hard-fought, with both the Indians and Sallies going on runs to thwart the other’s momentum. However, in the biggest moments, it was IR pushing through, thanks to the “Super 6.”

Canseco was his usual steady force that helped Michael Barnes and McGee utilize their power on the spikes. Canseco had 26 assists, three digs, two kills and an ace.

“I am just so proud of the team,” Coach Barnes said. “Sallies is a good team, but I said this when people would ask me at the beginning of the year about the team: I said, ‘We’re legit.’ We have the legit pieces in place. There’s a couple of pieces we needed to work on in Porter and Mason, which totally came through for us.

“Look what Porter did in that second set. Look what Mason did this whole postseason. Everybody was a contributor. We may have not had the best individual players, which I think is debatable, but we had the best team.”

Palmer finished the match with two kills and a block, while Singer contributed two digs, an ace and an assist. Both had several big moments in which they were able to run down balls that could have led to points for Sallies but kept the play alive for IR to wind up winning the points.

“We worked hard together as a team,” added Coach Barnes. “I’m just so happy for the kids. I’m so happy for the school. I’m happy for myself because we wanted it so bad, and it was a mission of ours to get it. It doesn’t come around too often to have a team like we did with a small school.”

Sallies coach Jeff Gricol was very complimentary of the Indians following his team’s second loss in as many meetings this year.

“They were extremely strong,” the veteran coach said of IR. “They have great attackers, a very good setter, and they pass the ball well. They are tough to compete against. We can’t come out and make the mistakes we made and expect to compete with them, because they are just a solid team.

“They just hit the ball extremely hard, and any time you hit the ball hard, it forces you out of your normal comfortable position, and that’s what they did. They hit the ball in spots that are hard to defend, so they are smart about that.”

And what was the difference between the first time the two teams met and this one?

“They obviously improved a little bit better than we did,” Gricol added. “I think we both improved, to be honest with you, and we were competitive with them to a point — at least in the first two sets here. They are just an extremely strong team.”

Sallies finished their season with a 15-3 overall mark in dual matches, and two of those losses were to IR — their only two losses in the state this season.