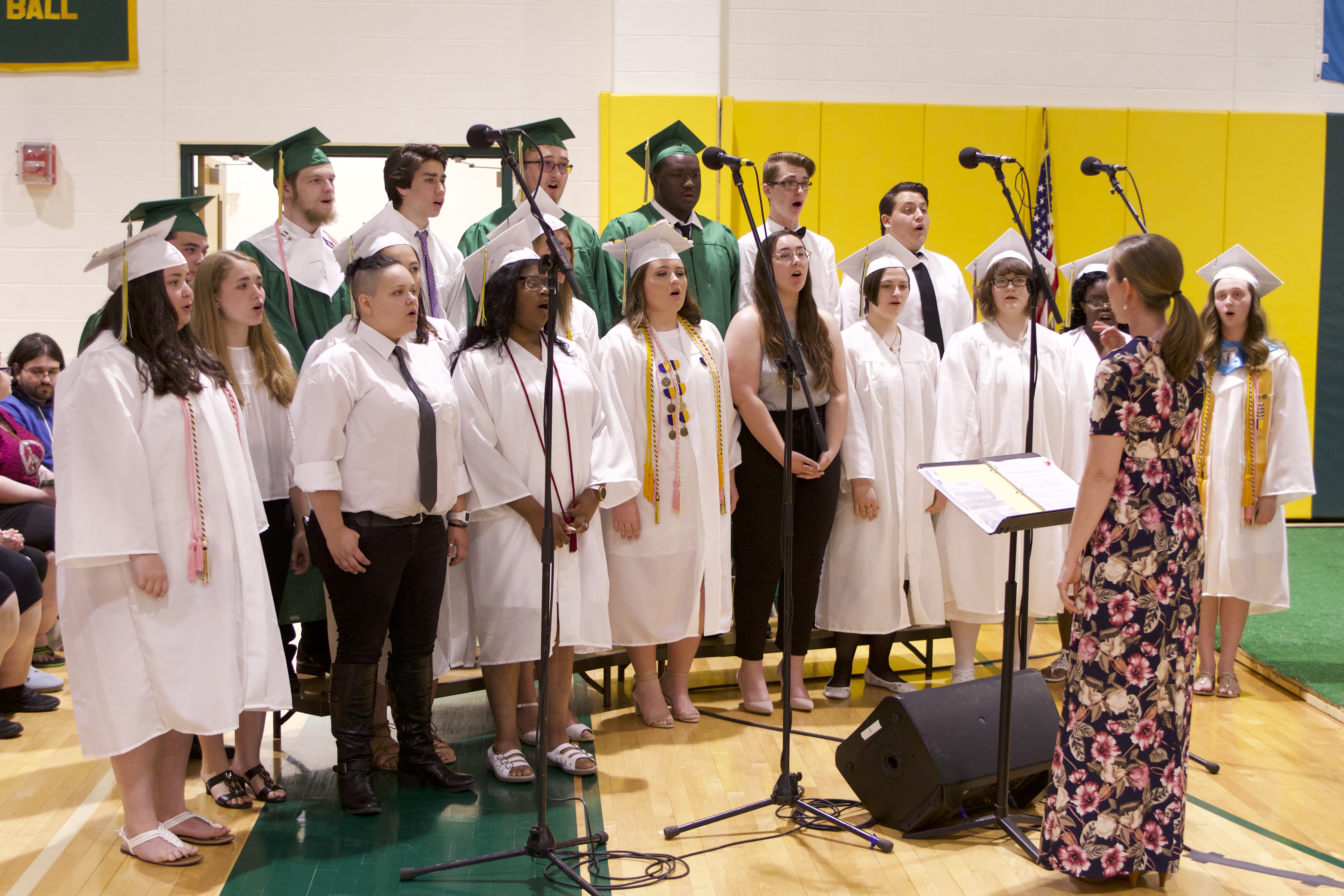 What makes a school worthy of song? At Indian River High School, “Pride” is the name and theme of the new alma mater, a song celebrating the Green and Gold.

At the 50th commencement for IRHS on May 29, the Class of 2019 was set to debut their new alma mater, recently written and updated by IR students.

An “alma mater” is a school’s anthem (or it can mean the school a person once attended). In Latin, it literally means “bounteous or fostering mother.”

The new alma mater project has been student-driven from the beginning. In 2016, a senior named William Michael Cotter wanted to write the song as an independent-study project. He wrote music and lyrics that were performed at the 2016 graduation. Band director Nathan Mohler helped expand the music to arrange it for multiple instruments.

This year, Laura Carey’s music theory class tackled the alma mater as a class project. They studied the music, each wrote several verses and voted on the top two, which were both written by senior Kathleen Carter.

“I asked them to take the words that Michael had written … to make it more general for the entire population of the school,” Carey said.

“When you write an alma mater, you’re looking for something everyone in that school can relate to,” she noted, “something that’s going to resonate for everyone that’s going to sing it, and be universal throughout the years.

Then, she said, the songwriters should add memorable lyrics and a tune everyone can pick up by the end of the song.

Some of Cotter’s original lyrics remain, including “Our pride comes from the waters/ Where river meets the bay.”

Seniors and the a capella group River Rhythms were to perform the song with a piano recording at graduation on May 29.

“It’s really exciting … and I think we take a lot of pride in the fact that it’s the first year, and we get to sing it,” Carter said.

“In band, we’re used to performing the alma mater at football games. And now that we’re able to sing it … it’s actually a much cooler experience,” said senior Grace Furman. “And I think it’s a lot … richer when you have the words.”

The marching band might add pep, but for solemn times such as graduation, the chorale is designed as a steady, pretty tune in four parts. The choir echoes elegantly: soprano and alto voices reaching high, grounded by the tenors and bass.

“Pride’s a big word in this building, so I really feel this sums up how the majority of us feel about our school and our experience here,” Carter said.

“I think it’s great,” said Principal Michael Williams. “One of these things I find interesting about Indian River High School is the tradition … and pride here in this building. It links back to previous years.” In other schools, he said, “I don’t quite remember the presence of the community and alumni. … It’s a great testament to the school” that former graduates are still active in IR and the community.

Indian River High School was set to graduate about 225 students this year at its 50th commencement.

“We preach all about ‘IR Pride’ and family here,” Williams said.

“I’ve only been here [at IRHS] two years, but every senior class has their own personality,” he added. “The one thing about this senior group is they’re very independent, and if there’s something to be done, they find a way to do it and get it done. They’re not scared to take on a task.”

Now, that alma mater is proud part of the students’ legacy.

A walk through the halls,

Pride echoes off the walls.

Our voices strong and loud,

Our pride comes from the waters,

Where river meets the bay,

Out to those ocean waters,

Our pride is here to stay!

And when the band comes out,

The bleachers scream and shout.

Whether we win or lose,

Our pride will still shine

So from the water’s journey, our stories can be told.

We are the green and gold!