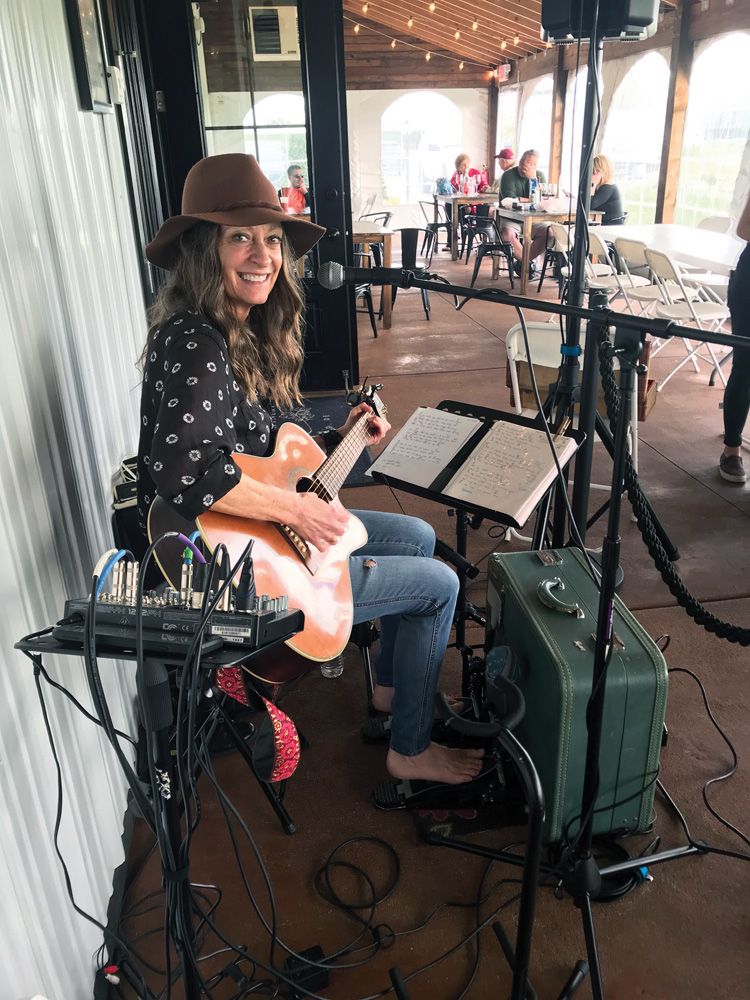 Cathy Jane Bostaph carries the same suitcase to work from her home in Ocean View that her father did half a century ago from the family home in Scrubgrass Hollow in Western Pennsylvania. Her father was a door-to-door salesman with a suitcase full of homewares. Cathy Jane, as she is known, is a singer-songwriter who made her own suitcase kick drum from that very special piece of luggage.

“When I see Cathy Jane walk in wearing her leather cowboy hat and smiling, and with her suitcase in one hand and guitar in the other, I just know our guests are going to enjoy her nice, low-key vibe and folksy sound that fits perfectly with drinking wine, relaxing and having a good time,” said Jerry Connolly, manager at Salted Vines Vineyard & Winery, where Cathy Jane is one of the favorite musicians.

“We grew up poor, even though we didn’t realize it, and we learned to improvise,” said Cathy Jane. “My parents had their own country band, and our home was always full of music. My dad played guitar and sang, and my mom could play any instrument. Back then, I loved listening to the music but wasn’t particularly interested in learning an instrument. My siblings and I would just dance around and have fun.”

In fact, it has taken Cathy Jane, now 60, “a lifetime” to figure out she was born to play music.

“I got married directly out of high school, and we have five sons who I mostly home-schooled,” she said. “My husband, Tom Bostaph, was in steel manufacturing until the industry collapsed, and then he literally dug ditches to earn money for us. He went to school in Pittsburg to become a CT technologist and was told there was a job available at Beebe. We arrived here in the mid-’90s.”

Around 10 years ago, Cathy Jane was in church when the pastor asked for volunteers to step up and help lead the worship service.

“‘Sure,’ I thought to myself, ‘there is a need and I can sing.’ And I found I loved it. Then I joined a couple of gospel groups, including a duo with Anna DiNenna called Scrubgrass & Langley, and we travelled to third-world countries. It felt awesome to see the smiles on the faces of children and their moms that our music brought.”

It was about three years ago that Cathy Jane decided that she was going to perform music by herself. She had been writing songs, based on her own life’s experiences, that fit more with her country/bluegrass/folk music roots.

“I was really scared to step out on my own at first. I wondered why, at my age, was I just figuring out what I was supposed to do in life. But I knew that I had stories to tell and music to be heard. And many people have told me that they relate to my stories and love my songs. Now it feels as though I am doing what I was always meant to do.”

Open-mic events were the means Cathy Jane used at first to get comfortable with an audience. One was at the Artful Bean in Bethany Beach that was hosted by Ian Kaufman. Another was at Casa DiLeo in Rehoboth Beach, hosted by local vocalist Melissa Alesi, who is now playing in Nashville.

“Ian and Melissa and the musicians that showed up to play were so encouraging and supportive,” said Cathy Jane. “In fact, it was there I met Rich Johnson, who has his own recording studio and recorded, engineered and produced my first CD, called ‘Back Home.’”

Cathy Jane went back home to Scrubgrass Hollow, where her parents still live, to take the photograph for the album cover and record the associated video for “Back Home.” Needless to say, the suitcase and her iconic hat are in the picture of her walking down a country lane. Unsurprisingly, she took the photograph herself, with her camera on a tripod and ingenuity her middle name.

Shawn Rineholt is a mandolin player and vocalist with the Sussex County-based Homestead Bluegrass Band. He has watched Cathy Jane’s music evolve for the last 10 years and finds her inspiring.

“Cathy Jane is the only ‘one-woman acoustic band’ I know,” he said. “She casually beats that suitcase kick drum with a pedal and snare brush with her bare feet while playing her guitar, and harmonica and singing. Her originals are honest — dark but hopeful. I love listening to her words. Her sound is unique, kind of like, if Bob Dylan and Loretta Lynn had a baby, Cathy Jane would be the result!”

The highlight of Cathy Jane’s gigs last year was being invited to play at the Ladybug Festival, a celebration of women in music that was sponsored by Gable Music Ventures out of Wilmington, Del.

This summer, Cathy Jane has managed to build a vertical gig list of four venues where she plays regularly. Self-promotion is not easy for any musician — especially a solo performer who is new to the business. Closest to Coastal Point readers is 99 Sea Level on the Bethany Beach boardwalk, where she plays on June 16, July 3, and Aug. 15 from 4 to 7 p.m. Other venues are Windmill Creek Winery in Berlin, Md., Chesapeake & Maine in Rehoboth and the Nassau Valley Farmers’ Market.

She was recently thrilled to open for Kyle Offidani, a progressive folk musician and artist, when he held his CD release party at the Rehoboth Ale House.

“It is a particular honor to play at the request of another musician in a room filled with musicians who appreciate your sound and listen to your words,” she said.

To learn more about Cathy Jane and her schedule, and to watch her excellent video, called “Movin’ On,” go to www.cathyjanemusic.com. She can also be found on Facebook.

“Movin’ On” is an appropriate title. Tom Bostaph has three more years at Beebe before he retires.

“That’s what I’m planning for with each new performance and with all my songs for my next CD,” said Cathy Jane. “In three years, I’ll be ready to take my music on the road. My music will keep us young!”