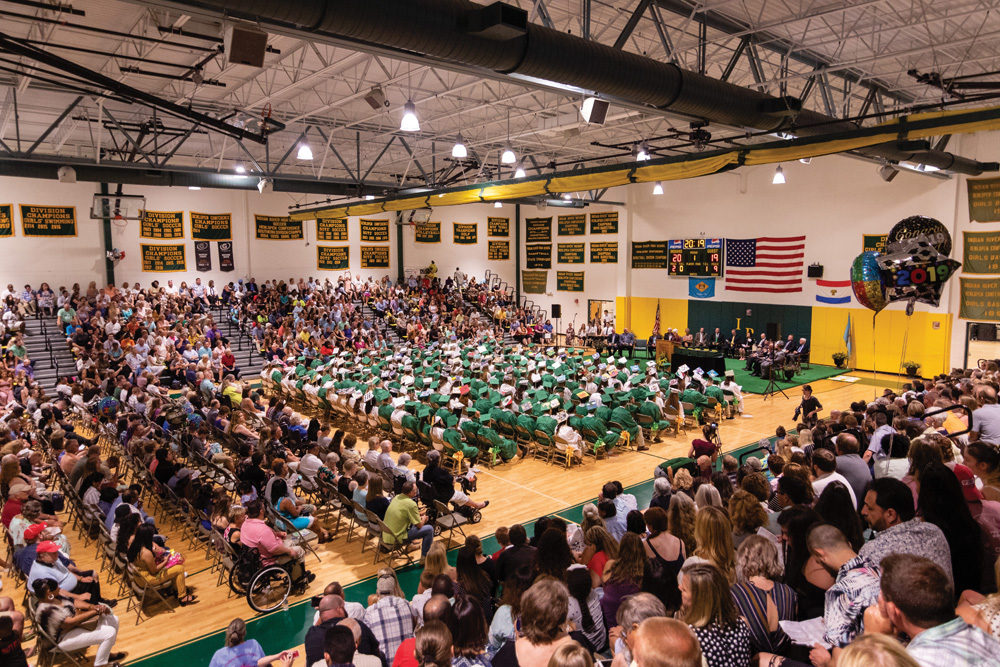 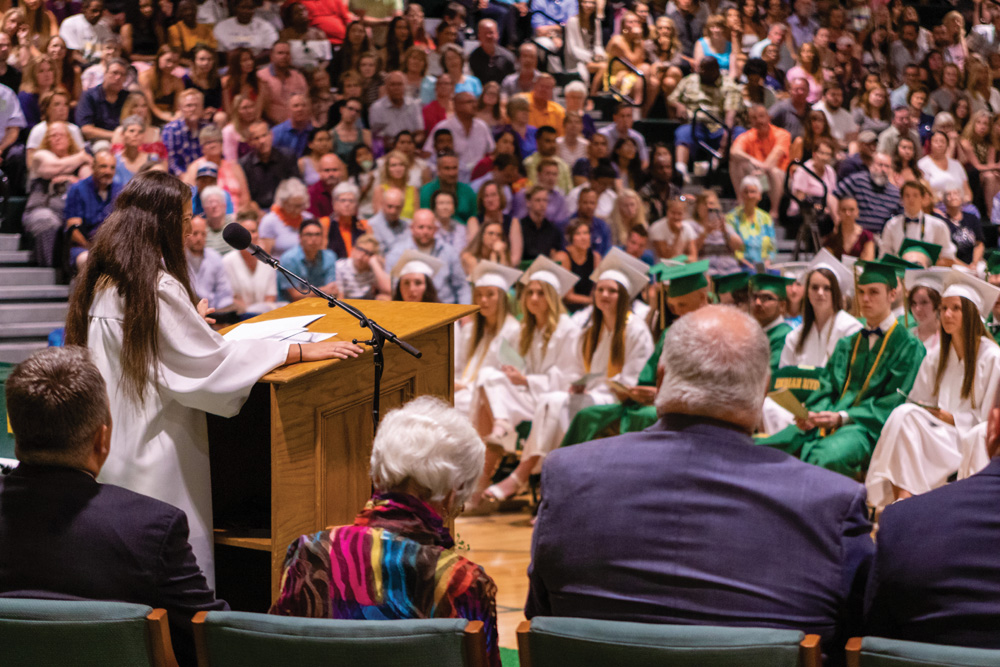 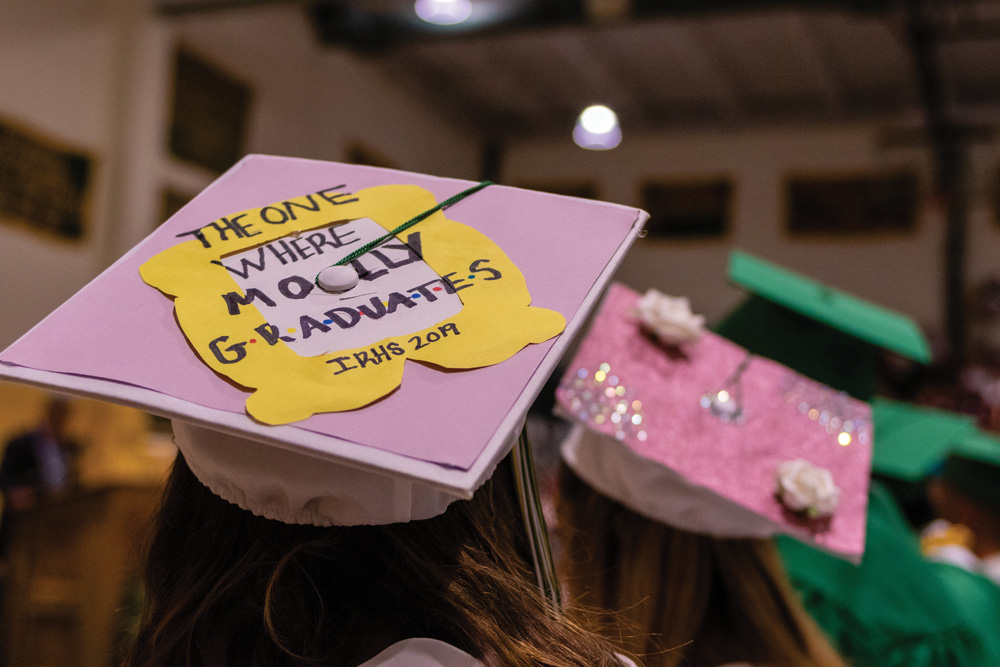 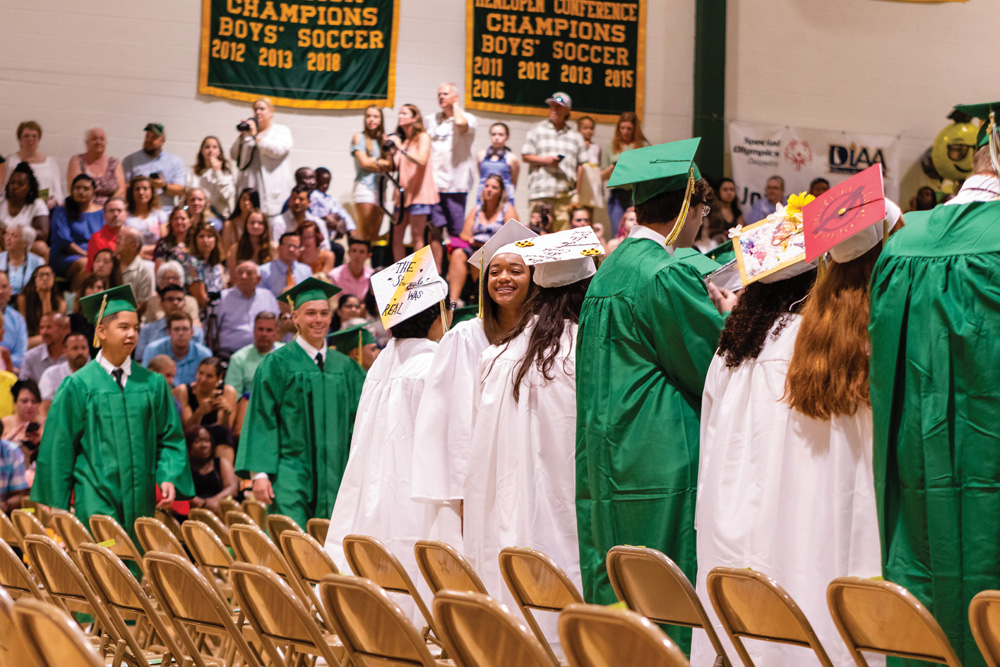 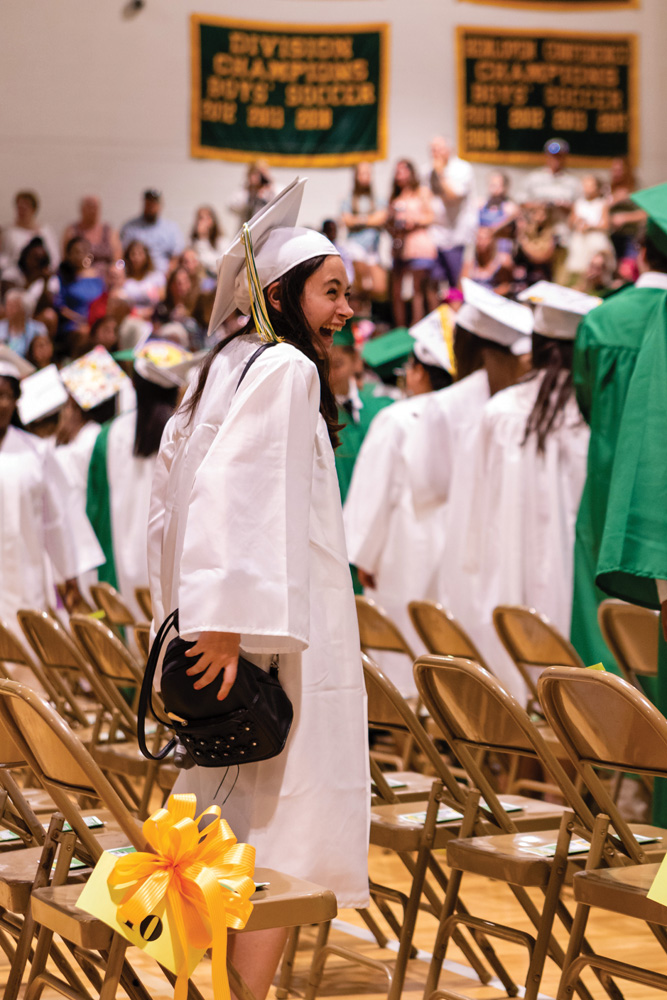 With the planned outdoor commencement ceremony thwarted by a chance of thunderstorms, Indian River High School held its 51st commencement indoors. But the Class of 2019 was ready to celebrate, and the 228 graduates brought enough family, friends and well-wishers to fill the gymnasium and overflow into the auditorium on Wednesday, May 29. It was one of the largest graduating classes in recent years.

Valedictorian Robert “Grant” Argo thanked the families and faculty who guided the students to this moment.

“Every single graduate sitting here this evening is destined to make the world a much safer and a much better place,” Argo said.

He urged them to keep the mantra “Why not you?”

Class President Julia Jordan shared amusing memories and thanked the “unsung heroes,” including custodians, cafeteria workers, nurses and all other support staff who helped behind the scenes.

“We are a class of different backgrounds and beliefs, but we are also a class who has the potential to go out into the world and do great things,” Jordan said.

While certifying the graduates, Indian River School District Superintendent and 1977 IRHS graduate Mark Steele told them, “Never, ever quit. You have a healthy dose of IR pride. When things get tough,” he said, keep going.

“The future … it won’t be easy, but thanks to this place and the people here, we’ll be well prepared,” said Salutatorian Grace Snyder.

Snyder dismissed the hackneyed idea that “high school is the best time of your life.”

“Sure, my four years here might have been the best of my life so far, but I highly doubt it will be the best four years of any of our graduates’ lives. We have too much potential to be the class that peaked as teenagers.”

All 228 graduates’ names were announced by Nathan Mohler, the school’s band director and IR Teacher of the Year for 2018-2019.

The River Rhythms a capella group performed the debut of an updated alma mater, “Pride,” written by William Michael Cotter (Class of 2016), Mohler and Kathleen Carter (Class of 2019).

They also performed the senior song, “For Good,” from the musical “Wicked.”

In a surprise announcement, 10 students were named winners of the IR Pride Scholarship from Indian River High School Alumni Association.

“These students exhibited true IR pride in their time here and have actively worked to make Indian River a better place for all stakeholders,” said IRHS Principal Michael Williams.

Indian River High School (and the school district itself) was formed in 1968 with the consolidation of the John M. Clayton and Lord Baltimore schools. The Selbyville School joined the combined school the following year. The original school operated from the old John M. Clayton building, and moved to a new building across the street in time for the 2005-2006 school year.

To celebrate the 50th anniversary of the school’s first graduating class, the Class of 1969, the Delaware General Assembly sent a commendation, in the care of state Rep. and Speaker of the House Pete Schwartzkopf, a member of the Class of 1972.

“For some of you, it’s been a steady, successful 13 years. And for others, a bit more challenging,” said Schwartzkopf, admitting, “If my teachers could see me here tonight, they would fall out of their seat.”

Often in trouble with the school and even the police from a young age, Schwartzkopf said his poor decisions and home life contributed to an aimlessness through his teen years.

Slowly, he said, he began to accept help when it was offered, as teacher after counselor after mentor helped him find a path forward. He attended Delaware Technical Community College and became a state police trooper.

“It hasn’t been a straight path from high school to where I am now. There have been detours, a few do-overs, great opportunities and some surprises, and I learned a lot about myself,” Schwartzkopf said. “I am living proof you can rise above your problems … and not be trapped by past mistakes. Don’t let past behavior or other people define you, and don’t ever give up on yourself.”

“You, the Class of 2019, hold a very special place in my heart, for you were kindergarteners when I became superintendent,” said Bunting, who spent most of her career leading the Indian River School District.

She encouraged the graduates to live with integrity, make a difference and be engaged in their world.

“You have truly profited from the involvement a wide community of supporters,” she said, urging them to get involved and give back to causes important to them. “As a graduate, you have the opportunity to design the rest of your lives. …We all eagerly await Part 2 in the story of you.”