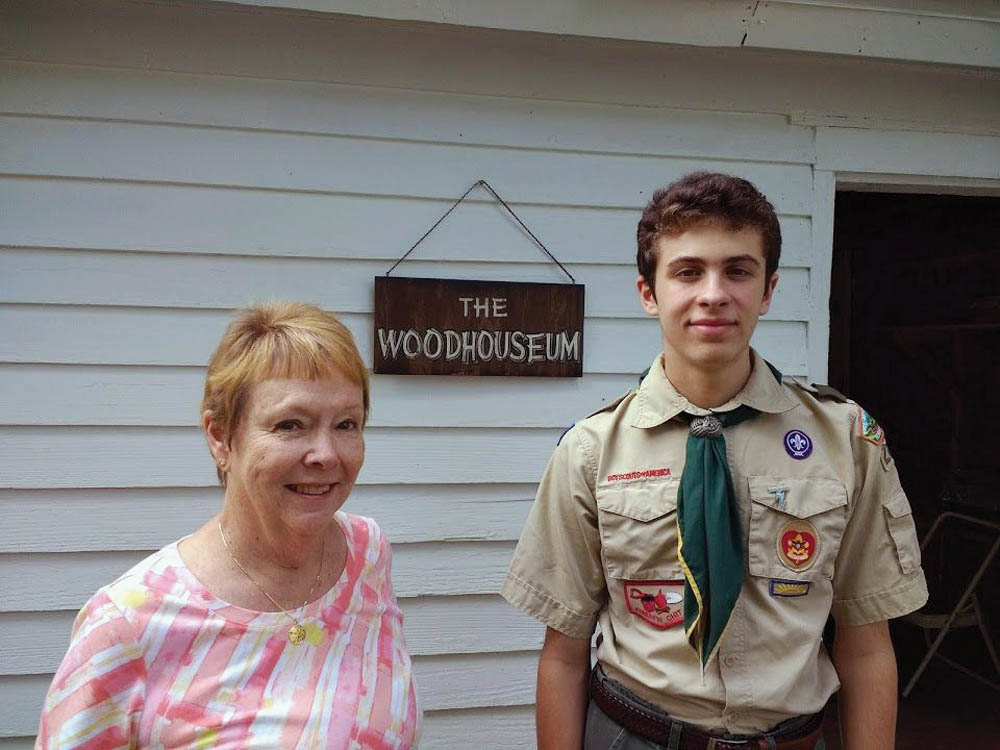 Before electricity, running water and central heat, life on the Delaware coast was hard. Winters were exceedingly cold, with the ground freezing in late October and not thawing until May. To stay alive, a family needed wood and lots of it.

If you ran out of firewood for heating, and cooking, you went hungry and you froze. If your wood got wet, all was lost. Thus, each Sussex County family had a woodhouse, or a dry space under cover, where cut logs were stored well in advance of the colder months.

According to urbandictionary.com, the term “woodhouse” has Middle English origins dating back to 1225-1275, and was part of the popular colloquialism in and around rural parts of Derbyshire, England. In those parts, “pulling a woodhouse” was to party extensively, typically over a number of days.

Another variation of ‘pulling a woodhouse’ was to uncontrollably lie about things so much that they no longer made logical sense. “Why Woodhouse me like that?” “That’s such a Woodhouse story.” “Dude, you’re such a Woodhouse.”

A woodhouse meeting the more standard definition sits on the grounds of the Coastal Towns Museum, owned by the Ocean View Historical Society (OVHS). The woodhouse is one of two, original, surviving outbuildings on the property, adjacent to the lovely 1901 gothic-style house. The other original outbuilding is the barn, one of the oldest in Sussex County. Visitors will also see a unique three-seater outhouse that was donated by the Sheaffer family.

The woodhouse and outhouse were recently restored by Millville resident Carter McCabe, who undertook the initiative as his Boy Scout Eagle project. McCabe is an active member of Boy Scout Troop 281, based in Ocean View, and has strong roots in the area, with each of the four spokes of his family tree pointing to recognizable, local, multi-generational surnames: McCabe, Evans, Hickman, Wilgus.

It therefore made perfect sense when Barbara Slavin, the current president of the OVHS, approached McCabe and asked if he would consider taking on the restoration project, timing its completion with the pre-opening of the Coastal Towns Museum in June of this year. McCabe’s parents were thrilled at the prospect of such an effort, as it would reinforce his local roots, not to mention being a rather unique undertaking as an Eagle Scout service project.

On Day 1 of the project, as McCabe was cleaning out the woodhouse and temporarily relocating some of the artifacts in preparation for the restoration process, he picked up an old woodhouse guest book and, while casually flipping through it, discovered the signature of his great-grandfather, Paul B. McCabe Sr.

No doubt, interest in his genealogical roots took hold at that moment. From working on site, McCabe came to realize how his other family names are sprinkled throughout the Coastal Towns Historic Village: great-grandfather Thomas E. Hickman Jr. and great-great grandfather Thomas E. Hickman Sr. in the Tunnell-West House; grandparents Anita and Forrest Evans honored on the brick path in front of Hall’s Store Visitor Center; and grandmother Jane Wilgus McCabe highlighted in the Bethany Beach section of the developing Coastal Towns Museum house.

In late April, McCabe managed two significant work days on the Eagle project, with numerous volunteers from his Boy Scout troop lending their muscle to strip the vinyl siding from the woodhouse, and scrape and paint both the woodhouse and outhouse.

Other work days throughout the month of May saw McCabe and workers reinforcing the flooring of the woodhouse, and thoroughly cleaning out more than 100 years’ worth of dust. Needless to say, face masks were worn by all participants.

In the final steps of the project, selected artifacts were cleaned, returned to the woodhouse and displayed appropriately, with consultation from Slavin. And some cherished family photos of the home’s original occupants (Slavin’s grandparents, father and aunts) were lovingly framed and brought to life. Lastly, the outhouse was cleaned, and some touches were added that visitors will very likely find amusing.

Service to others is an important part of the Scout oath: “...to help other people at all times.” According to the Boy Scouts of America (BSA), each year thousands of Scouts strive to achieve the coveted Eagle Scout rank by applying character, citizenship and Scouting values in their daily lives.

In addition to completing the project before the Scout’s 18th birthday, one of the Eagle rank requirements is to plan, develop and give leadership to others in a service project helpful to any religious institution, school or community. Through this requirement, Scouts practice what they have learned and gain valuable project management and leadership experience.

There are many possibilities for an Eagle Scout project. What is most important is the impact or benefit the project will provide to the beneficiary organization. During McCabe’s presentations to various local organizations, he highlighted the value of the woodhouse project, as it will not only represent a walk back in time for history buffs, it will also serve as an education resource for schools and other community groups as they tour the Coastal Towns Museum.

Asked about the value that the Eagle project will add to telling the story of Baltimore Hundred, Slavin said, “Both the woodhouse and outhouse were essential parts of early 1900s farms. The Coastal Towns Museum is very fortunate that Carter’s project has restored these two icons of Sussex County life. The woodhouse is a dying entity. No one builds woodhouses anymore; they simply purchase one of those modern sheds from Lowe’s or Home Depot.”

The Coastal Towns Museum showcases the large Victorian house that will be transformed with displays as soon as funding is secured. The newly roofed and stabilized barn, built in 1900, is one of the last of its kind in Sussex County.

On any Wednesday this summer from 1 to 3 p.m., drop by the village and its museum for a visit! You will note that, in addition to Ocean View, the surrounding coastal towns of Bethany Beach, Millville, South Bethany and Fenwick Island are represented in the museum.

The woodhouse is instantly identifiable by a charming Woodhouseum sign hanging on the exterior, handcrafted more than 50 years ago by Slavin’s father, Maurice Evans. When you enter the woodhouse, you’ll see the restoration completed by Carter McCabe and our local Boy Scouts, and you’ll have a better understanding why woodhouses were so important to early coastal life.

Marsha Evans is a long-time resident and supporter of the Ocean View Historical Society. She developed and manages the society’s Facebook page, and she happens to be the proud mother of Eagle candidate Carter McCabe.