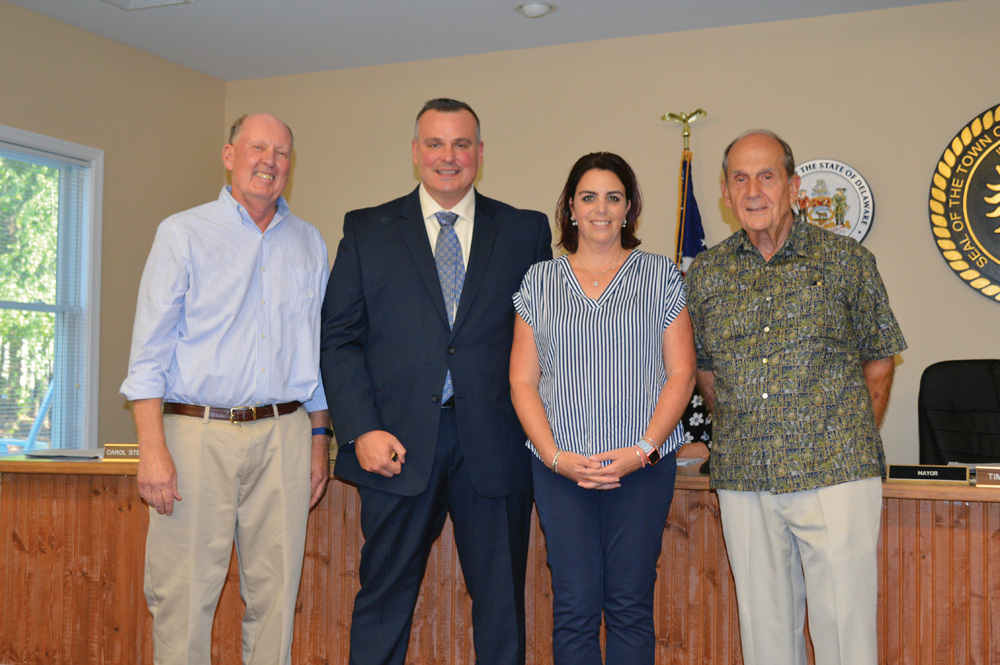 “He just continued to rise to the top in the interview process,” said Mayor Tim Saxton. “The town council and I believe he is the right choice for the Town, and we also believe he will be successful here.”

It was a good sign when police chiefs from neighboring towns also approved his candidacy, “because our chief has to work with those chiefs, and they need to have confidence that we’re hiring the right people,” Saxton said.

“He has a great plan of what he wants to do with the department,” Saxton continued. “He cares about his people, and he cares about what’s going to happen here as long as he’d like to stay.”

With more than 25 years in law enforcement, Lovins has worked in departments both big and small: with the Kentucky State Police since 1995 and with the Dewey Beach Police Department since 2016. He has been an assistant post commander, detective and special-response team member.

“He’s a certified police instructor and field-training officer in both Kentucky and Delaware,” Saxton noted. “That’s an important attribute for a small police department, because we need people who can help train our people,” whether they’re young or transferring from an out-of-state police department.

While in the U.S. Navy, Lovins was a petty officer, third-class, and an aviation rescue swimmer, “So I guess he’s perfect for the beach,” Saxton quipped.

Although the South Bethany Police Department has had leadership in place in recent months, they haven’t had a fulltime police chief since April 1, nor a full slate of officers in more than a year.

“We’ll probably be up in full force in September … or October,” Saxton said.

Recruitment continues for two fulltime police officer positions, as well as seasonal enforcement staff. On Thursday, June 20, the town council will consider another finalist for a fulltime position — a Delaware-certified candidate.

The SBPD currently has one regular officer, Sgt. Patrick Wiley; one officer who will soon test for his Delaware credentials, Killian Klopp; and one police academy recruit, Terik Fullerton.

“The support we’ve gotten from the other communities is amazing,” Saxton said. “I know everyone wants our own police department, and I get it. We’re going as fast as we can.”

Asked if there will be any women on the police force, Saxton responded, “We take ’em as they come. We have gotten very few female applicants. … It’s who’s applying for the job at the current time.”

Saxton also offered his thanks to Sgt. Patrick Wiley for holding things together as (briefly) the lone SBPD officer; as well as to outgoing temporary administrator Mike Carroll for leading the recruitment process and reviewing the police manual; and to outgoing council member Masiello for guidance through the decision process.