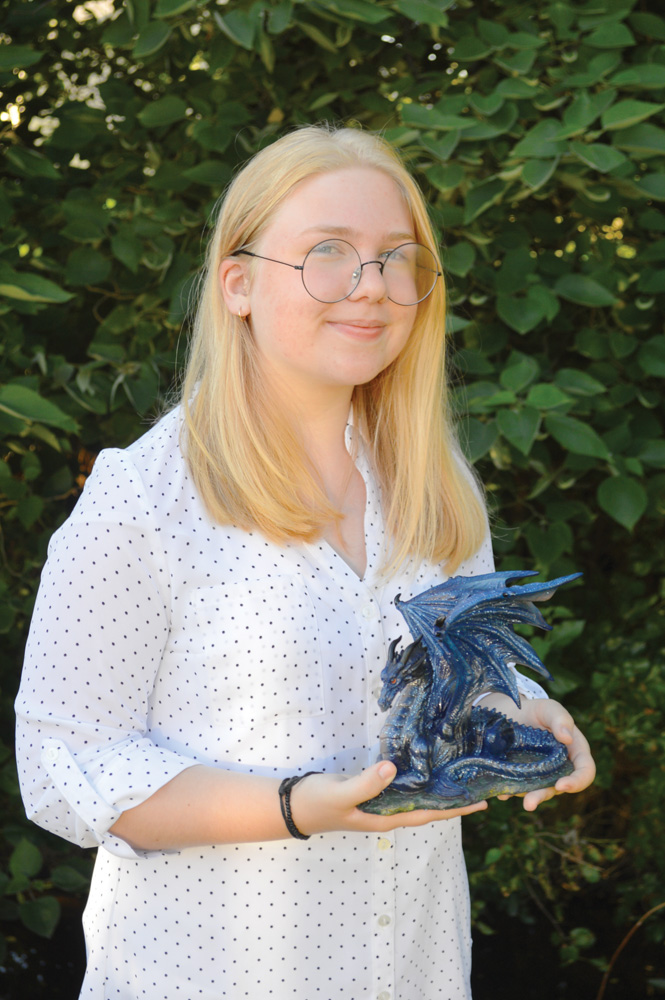 Sometimes, the best leaders aren’t center-stage. But they can deliver a great pep talk behind the scenes. Grace Kemp of Millsboro proved that in June while finishing eighth grade at Southern Delaware School of the Arts. She won the inaugural Distinguished Dragon Award, created to celebrate the equal importance of academics, art and character.

“We were looking for the epitome of what an SDSA student should look like upon graduation from our school,” said Principal Travis Bower. “They have the growth mindset, respectful, well-rounded, involved in the arts, always helping out however they can.

“What really did it for her was the fact that she’s always willing to help with performances … to help with set design, to help with younger concerts, playing instruments for accompaniment,” he said.

Bower made the surprise announcement at this year’s eighth-grade “moving-up” event honoring the soon-to-be ninth-graders who were leaving the school — many of them having attended SDSA since kindergarten. He illustrated Kemp’s dedication with a story about her painting set pieces during a dance rehearsal.

“Several of her classmates were struggling with portions of their routines, and she stopped her work to address her peers. She commented, ‘For all of us eighth-graders, this is our last performance. This is the last time that we’ll ever be on stage, and I’m going all-out for this. I want to make the best set I can for you, and you need to do your best and put it all out there to be the best you can do for everyone else.’

“That speaks volumes for her character,” Bower told the audience.

Kemp had no clue the award was coming until the principal started dropping hints in his speech.

“I started breaking down,” Kemp said. “I was honored, because I love the school so much. I put my best effort into everything I did there.”

Fittingly, the award is a dragon statuette, glittery and midnight blue, similar to the school mascot.

Kemp was stunned to take the spotlight that day, but she’s no stranger to the limelight. During middle school, she sang and played guitar in the SDSA rock band, although she said she also loved art and set design.

But nothing compared to the thrill of singing lead vocals in Nirvana’s “Smells Like Teen Spirit” for a full house.

“The reaction from the crowd on that song was so powerful and overwhelming,” Kemp said of her seventh-grade show. “Having everyone just cheer my name, cheer me on. … You’d never think a kindergartener would be screaming your name for a ’90s rock song.”

The theme of the 2018 concert was “Wish You Were,” dedicated to the musicians who died young. This year’s concert was a 1969 tribute to Woodstock.

Kemp was self-taught on guitar. It all started with a ukulele on her 12th birthday. Soon, she learned just enough guitar to audition for the rock band program. Once accepted to that seventh-grade major, she practiced on her grandfather’s guitar all summer.

During graduation, Kemp was also recognized as a scholar, designer and “jack of all trades.” That recognition for her hard work was “so gratifying. … It brings a smile to my face. … With all of the stuff I’ve done, I have to give a big thank-you to my classmates, my teachers, everyone who was with me on this eight-year journey at SDSA,” she said.

Each of the arts teachers, she said, encouraged her to practice and be more bold, while her academic teachers made school enjoyable.

Plus, she said, she loved performing alongside her friends and being a leader. With only two classes per grade, “You know everyone. I grew up with them,” Kemp said, having spent all of grades 1 to 8 there. Now, her younger sister will start eighth-grade this autumn.

At Sussex Central High School next year, Kemp hopes to study art and theater, and play xylophone in the band. She said she would love to continue being a leader in arts, perhaps becoming a music or art teacher.

SDSA is Indian River School District’s arts magnet school, where traditional academics are taught through an artistic lens, and the electives relate to music, dance or design. The Distinguished Dragon is the in-school counterpart to SDSA’s new Walk of Fame, which recognizes distinguished alumni for their contributions to the community and world.