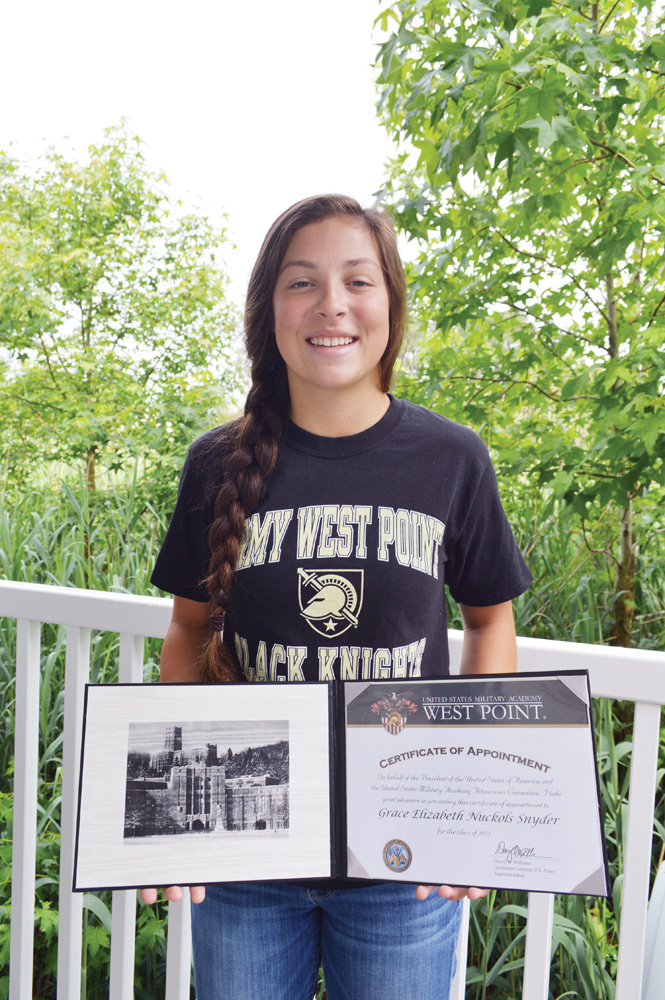 For the next four years of college, she’ll be wearing a uniform, as 17-year-old Snyder was accepted to the U.S. Military Academy at West Point.

Only four Delawareans are entering West Point’s Class of 2023.

This summer is for boot camp. With a single backpack of personal items, cadets will bid farewell to their families on July 1. Then, the U.S. Army takes over to “teach us how to march and scream in our faces — just the start of the mental breakdown, I guess,” Snyder said glibly. “Day in, day out — learn how to be an Army cadet.”

After boot camp ends in August, school starts almost immediately, with just a few days’ break. Then she plans to study law and economics.

After graduation, she will enter the military as an officer, required to serve at least five years.

Snyder will be a fifth-generation recruit. Her mother and grandfather were in the U.S. Air Force. Her great-grandfather and his father both chose the U.S. Army. Various other family members have also served in the military.

Hailing from the Selbyville/Bayville area, Snyder said she didn’t initially consider a military service academy until West Point entwined both her family history and her own personal goals. Big into softball, Snyder usually spent her free time in showcase tournaments, trying to get recruited for a college team.

“She had toured the campus of West Point while attending a softball camp, and fell in love with the actual campus itself,” said her mother, Rebecca “Becky” Snyder. “She had always talked about getting into some kind of law-enforcement or law.”

“In my childhood, I’ve just had so much influence through my mother, hearing military stories, and my father, big into movies, of course. Seeing ‘Platoon’ and ‘Full Metal Jacket’ would scare some little girls, of course, but I was always like, ‘Oh, my gosh — that’s so amazing,’” Grace Snyder said. “Of course, I was raised very patriotically — you know, the American flag always on the front lawn, things like that… so always wanted to serve our country.”

During the application process, Snyder admitted, she definitely had doubts about locking down the next third of her life to military service.

“I said, ‘OK — this is it, I’m doing going to dedicate myself to this and put my full force toward this and, hopefully, get an appointment.’ … If I did get into West Point, it would put me on a path to be the most successful I can be,” Snyder said. “I wanted to also serve my country, which is something my school allowed me to do.”

She said she is looking forward to that sense of unity, even among people as competitive as she is, “So becoming friends and family with people who are on that level of wanting to succeed will be a great experience.”

Despite the lack of women’s shoes at the academy, women do make up 22 percent of the student population, according to U.S. News.

“The West Point ratio of girls to boys is — rough,” Snyder acknowledged, but she said she’s un-phased by the statistic. It’s a prestigious school. Students receive free tuition, room, board and insurance. And they’ll definitely have a job afterward.

The separation from home is so complete that cadets aren’t even allowed to contact anyone for the first month or so. They can only receive postal mail. Eventually, they’ll be allowed one short phone call. Cadets don’t bother bringing cellphones or laptops.

“That’ll definitely be rough — not just my family, but not talking to some of my friends. … Everybody says they’ll write me, so we’ll see how many letters I actually receive,” Snyder said. “That was definitely a part of me deciding, because know that seven weeks is definitely going to take a toll, not being able to talk to anybody and maybe getting a little homesick.”

Many cadets just say “Embrace the suck,” because it will be mentally and physically exhausting, so she’s trying to enjoy the beach and her friends before shipping off. Snyder will turn 18 around Labor Day.

Snyder thanked her parents “for always supporting me, and friends for encouraging me on the path I’m going to take, even though it’s not normal.”

Cadets are required to play one NCAA sport or two club sports, so she’s decided between her beloved, but competitive, softball or two new, interesting sports.

A longtime athlete, Snyder is also proud of IR softball (recently earning all-conference honors as a catcher) and Unified Basketball (“something I’ll always treasure,” where she played alongside classmates with special needs).

At last month’s graduation, she was the Class of 2019 salutatorian. Snyder was also a member of National Honor Society, Leo Club and Foreign Language Activity Group (FLAG).

“I can’t even express how proud I am of her,” said Becky Snyder.  “We are beside ourselves that she went through the whole process … and that she was accepted. … She’s always been a very, very good student, and her drive is just insane. Both of us — me and my husband — still can’t believe she’s our kid.”

As a history buff and native of New York state, her father, Jim Snyder, has geeked out over the school itself, located at a former fort on the Hudson River’s west bank.

“I knew she was going to get in,” Jim Snyder said. “I think Grace is very reserved and she didn’t want to get excited,” but when the phone call finally came, “I raced in, and she was already in the kitchen, jumping up and down. … Of course we’re super-proud. She does well in whatever she tries.”

Snyder also has a younger sister beginning IRHS this year.

An honor to be nominated

“The next few years will be challenging — academically, mentally and physically,” Coons stated, “but I am confident in their ability to rise to the challenge and to come through this experience well-equipped to join the ranks of America’s finest military officers.”

It’s truly an honor just to be nominated. Students need distinguished nominations, typically from a U.S. legislator, to even be considered for the Army, Navy, Air Force or Merchant Marine academies.

The coveted nomination requires applications and interviews. Besides regular school applications, essays and recommendations, the students must pass health and physical-fitness exams.

Students interested in attending a service academy can learn more at website for the schools or their U.S. delegates.

“Get started sooner than later — definitely,” Snyder said. “Do lots of research to know what you’re going into. It’s definitely a commitment, but also very fulfilling. You get the best education, and then you get to go into the service. It’s definitely a path only a few people would want to take, with the boot camp and everything.”

For the Class of 2023, a total of 12 Delawareans have accepted appointments to the various service academies, including Chris Marshall of Sussex Academy and Madison Rice of Sussex Central High School, both attending the U.S. Merchant Marine Academy.

Snyder and her peers will spend their final days preparing for service, which includes finding the perfect socks to break in and soften up those regulation boots.