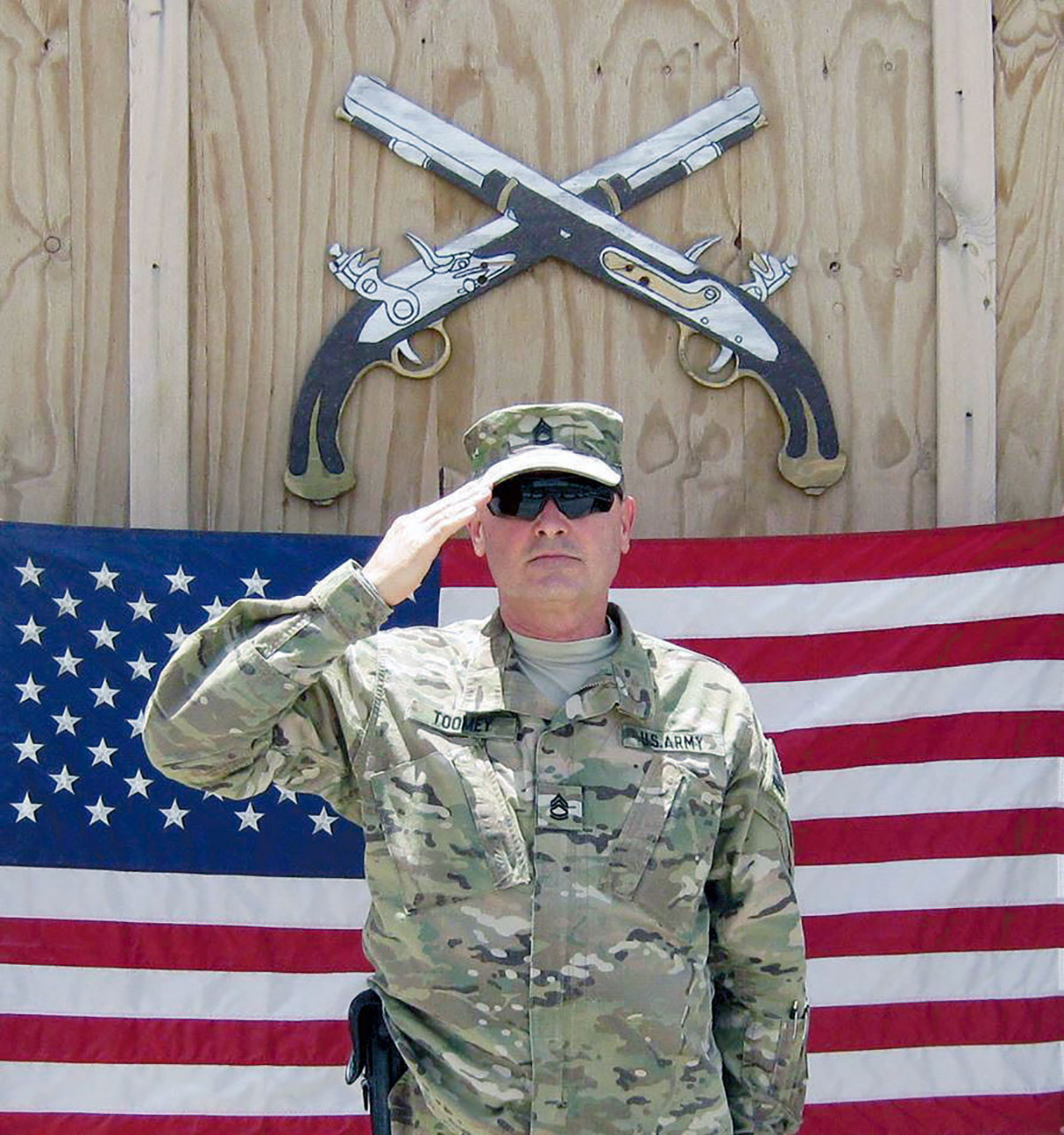 Toomey announced in May that he was planning to leave his position with the Town to become a constable at Phillip Showell Elementary School in Selbyville. Due to accrued time off, he will still be a paid employee of the Town till Dec. 1, he said in an interview at the Dagsboro police station this week.

Toomey has been chief of the town’s police force since 2014; before that, he was chief of Ellendale’s police force for 11 years. For the first five years of his tenure with Dagsboro, he remained the chief in Ellendale as well.

Multi-tasking, for Toomey, extends beyond his 32-year law-enforcement career. While working as a police officer (24 of those years as a chief), he interrupted his career to serve in the U.S. Army. He served in Germany, Hawaii, Korea, Bosnia and Afghanistan, in addition to many stateside assignments.

Toomey wears a metal bracelet engraved with the name of a good friend, Trenton Rhea, with whom he was serving in Afghanistan when his friend was killed.

“We were serving together,” Toomey said. “You see them that morning; you don’t see them anymore.”

He is also very proud of the department’s “unprecedented clearance rate” for complaints — more than 90 percent, as opposed to the statewide rate of 40 percent.

“We attempt to clear them immediately,” he said, adding that the Dagsboro Police Department currently has no active warrants in its files.

The predominant crimes in the town, Toomey said, are shoplifting and drugs. He added that the shoplifting — most of it, anyway — is probably related to drugs, so the two issues tend to go hand-in-hand.

“A lot of it,” he said of the shoplifting incidents, “is heroin addicts seeking quick ways to make money to purchase their heroin.

“It’s truly an epidemic,” Toomey said of the opiate-abuse problem that is rampant not just in Dagsboro but also across the nation.

He said that he feels a harder line should be taken against drug offenders than is currently the norm, and that treatment in prison is more effective than treatment outside of incarceration, partially because drugs are not available in prison.

With the opiate epidemic, Toomey said, the stakes are high for successful treatment.

“I cannot think of a single parent that wouldn’t rather visit their child in jail than visit them at the morgue,” he said.

Looking back on a career during which he served with the police departments in Laurel, Georgetown and the Delaware Capitol Police in Dover, in addition to Ellendale and Dagsboro, Toomey said, “I would like to think my career has been a positive” in those communities.

He said he will miss working with the staff in Dagsboro, as well as serving the community in general.

In his new position with the Indian River School District, Toomey will serve “as an armed presence at the school,” implementing safety programs the district put in place six years ago. “I will be the physical security arm for the principal,” he said.

“It’s the most advanced security program in the state, as far as ensuring that our children are kept safe,” he said.

The search for Toomey’s replacement as Dagsboro police chief closed on Friday, June 21; there are 11 applicants for the job.

“We hope to have that individual not just hired, but on board” by Monday, July 24. That, Toomey said, would give the new chief about a month to “right seat-left seat with me,” during which Toomey would train the new hire for the first two weeks and observe for the second two weeks.

“We intentionally narrowed our search to Delaware and certified Delaware police officers,” Toomey said. About half the applicants are from Sussex County, he said.