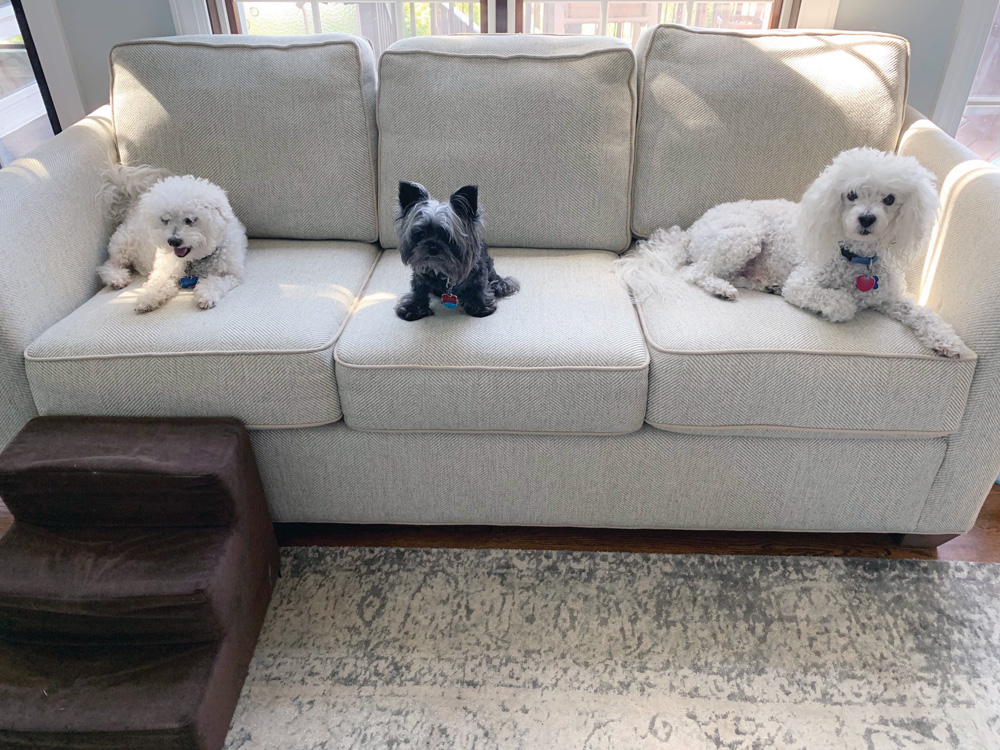 Bravo’s dogs find a new home, together, in Ocean View

In the midst of so many unanswered questions regarding the disappearance of Bethany Beach resident Linda Bravo, one thing remained unquestioned: her love for her three dogs.

She even called them her “three kings,” and named them as such: Henry, a poodle; George, a miniature Yorkie; and Louis, a bichon frise. “She treated them like royalty,” said local businessman and animal activist Al Casapulla.

When Bravo went missing late in the evening of June 13, friends and family were mystified as to where she could be, and their deepening concern centered around one fact: they knew she would not have left her dogs.

So when she didn’t come home, care of the three dogs became a priority. Casapulla said someone reached out to him, knowing his love for dogs. He said he immediately brought Lisa St. Clair (owner of Tail Bangers dog treats company) into the small group trying to find a temporary home for the three dogs.

“She jumped right in,” he said of St. Clair, who quickly contacted a family in Millsboro to provide a foster home for the dogs. Casapulla said he “wasn’t going to let them go to just anybody,” particularly because they are older dogs — the oldest is 10 — and Louis has a congenital heart condition.

Very quickly, the goal became finding a permanent home for the dogs — and a top priority was finding someone who could take all three.

“I thought, ‘This is going to be so hard for me, to find a good home for these dogs,’” Casapulla said.

Meanwhile, Sue Dick of Ocean View was going through an animal crisis of her own. Having lost her 14-year-old dog recently, she had brought home a 6-year-old dog that was a rescue. That dog turned out to have medical needs, including seizures, that Dick didn’t feel she could handle. So on June 13, the same day Bravo went missing, Dick had returned that dog to the rescue.

When she learned that Bravo was missing and that her dogs needed a home, she reached out to Casapulla, who said she seemed like “the perfect person” to take them. “I said, ‘Wow, this is amazing,’” he said.

When he first met Henry, George and Louis, Casapulla said, “They were very nervous. They were shaking; they were scared. I know they are waiting for Linda to come through that door. It’s heartbreaking,” he said.

“I never even met this lady, but I feel so connected to her,” said Casapulla of Bravo. He said he felt helping the dogs find a home was his way of honoring her.

The three dogs have settled in to Dick’s home this week, after Casapulla gathered up all of their toys, beds and even clothing, and brought it to her house, he said.

“My truck was loaded,” he said. “Sweaters, T-shirts, hats…” plus piles of toys and six of their nine beds — the others will stay at Casapulla’s home so they will have familiar beds if they need to stay with him when Dick needs to go out of town, he said.

Dick said the dogs are eating well and are “getting better” each day, in terms of adjusting to their new home.

“I think they’re adapting,” she said. “Now, they’re even telling me when it’s time to go to bed.”

All three are sleeping on her bed with her already.

“They each have their little place,” she said. Georgie — all 3 pounds of him — curls up against her shoulder, while Henry sleeps alongside her leg, and Louis “has his own spot.”

She said she is enjoying the challenge of three dogs — she’s never had more than one — and that she is getting better at walking them without them getting tangled in each other’s leashes.

Dick said she has told Bravo’s family that they are welcome to visit the dogs anytime.

“I hope that’s a comfort to them,” she said.

Casapulla, who described himself as “very faith-based,” said he believes that God had a hand in helping him find just the right home for Bravo’s dogs.

“I believe this was God’s work,” he said. “I would hope someone would do the same for my dogs.”

He said he feels that the dogs aren’t the only ones who have benefited from their new arrangement.

“She’s my neighbor, but I didn’t really know her,” he said of Dick. “I’ve gained a really nice friend. She’s a wonderful woman.”