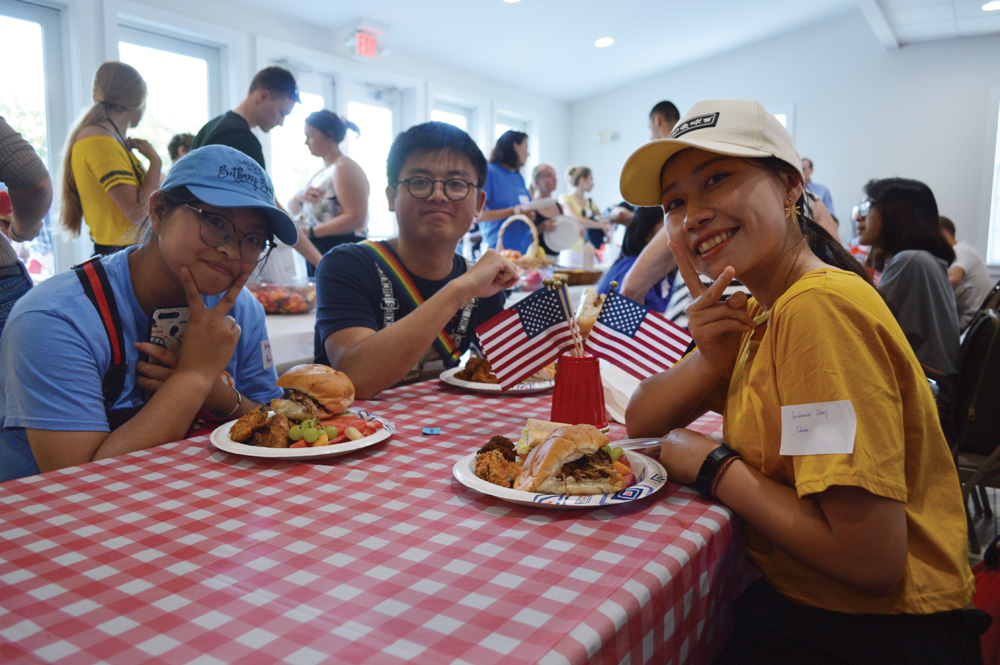 Event introduces foreign students to ‘the best side of America’

International students jump through many hoops to spend their summer cooking, cleaning or serving meals in coastal Delaware. St. Martha’s Episcopal Church gave the young travelers a safe place to meet and learn about American culture at the 2019 International Student “Welcome to the Community” Picnic on June 27.

“We’d like them to be introduced to the best side of America and take that message home. We want them to have a good, safe, healthy start,” said organizer Bill Gay of the 14th annual event in Bethany Beach.

More than 130 students representing 25 countries, ranging from China and Kazakhstan to some in the Caribbean, attended this year’s event.

Students met each other and local residents, got free local logo T-shirts and U.S. magazines, won giveaways, played games and the piano, and registered for free stand-up paddleboard lessons.

They chatted with local police and other first-responders, including a Delaware State Police trooper who once attended the annual picnic as a student herself. They also grabbed free bicycle safety information and maps.

Organizers said they were grateful for the dozens of businesses, organizations and volunteers who donated of food, supplies, gifts and time.

First impressions are important, and the students said they appreciated this welcoming attitude, that St. Martha’s helps spread a positive message into the world. And these students send that message back, even returning year after year.

The picnic is so special that Peter Rodak detoured from a Miami business trip to attend. He first attended the picnic around age 21, in 2007. Now, he works at a Polish university in Katowice, teaching physical therapy and also doing international relations for the school.

“I’m bonded to the event. … Bethany is a feeling,” Rodak said.

Like many of the students, Rodak wanted to improve his English skills. Despite years of English classes, “The biggest difference was the first year here.”

Rodak said he completely encourages students to spend a summer abroad: “Just do it. Feel the flow. Just pick a spot in the U.S. — of course, I recommend here.”

Most importantly, he said, make time for people and experiences, even if it means losing a few hours of pay.

“Definitely make use of all the things people want to do for [you],” like dinner or English lessons. That’s how to bond with friends, he said. “Work a little bit less and mingle more. Get into the society.”

Rodak said he had attended one Fourth of July party and made lifelong friends. He joked that he shared Polish hospitality by bringing vodka to the party. A dozen years later, he has attended about five St. Martha’s picnics, and Rodak considers people he met in Bethany to be lifelong friends.

“I really like it here because everything is so organized,” said Smailyn Miesis, a student from Dominican Republic, noting that Delaware’s coastal resort area has bicycle lanes, and governments try to reduce litter on the roads. Plus, Bethany Beach is great, she said, because it has public transit access to New York City. Miesis said she wants to visit Fifth Avenue, the museums and, of course, “In the movies, you always see the Central Park.”

She worked in Indiana in 2017, where, she said, “There wasn’t much to see.” But living abroad alone for the first time, she learned to cook and care for herself.

This summer, Miesis has met another Dominican woman, Yoleisy Difre. They both work in a hotel each morning and a sweets shop each night.

Coming from the Dominican Republic, “We need to start the process almost a year before,” including a $1,000 agency fee, paperwork, interviews and visa process, she said.

“To obtain a J-1 [Exchange Visitor Visa], a student has to be enrolled in college; pass an English proficiency test, as well as a medical and security exam … show they have secured a U.S. job” and prepare to pay airfare, room, board and U.S. taxes, according to Gay.

“In a few years, these students may be business and governmental leaders in their countries, who we hope will always fondly remember how sincerely they were welcomed to America,” Gay said.

All international students were welcome to attend the June 27 event. The picnic does not include any religious proselytizing, organizers noted.

“Many of us old-timers … had immigrant parents who were helped by some American to start new lives in the U.S.A. and/or we had a career dedicated to keeping world peace,” Gay said.

Many residents involved in the picnic invited students over for an American home-cooked meal during this summer. Others volunteered to teach conversational English classes.

St. Martha’s will host a Culture Club thus summer, with games, cuisine and discussion, on Thursday nights at 7 p.m., starting July 11, at Maplewood and Pennsylvania Avenues. For more details, call the church at (302) 539-7444.