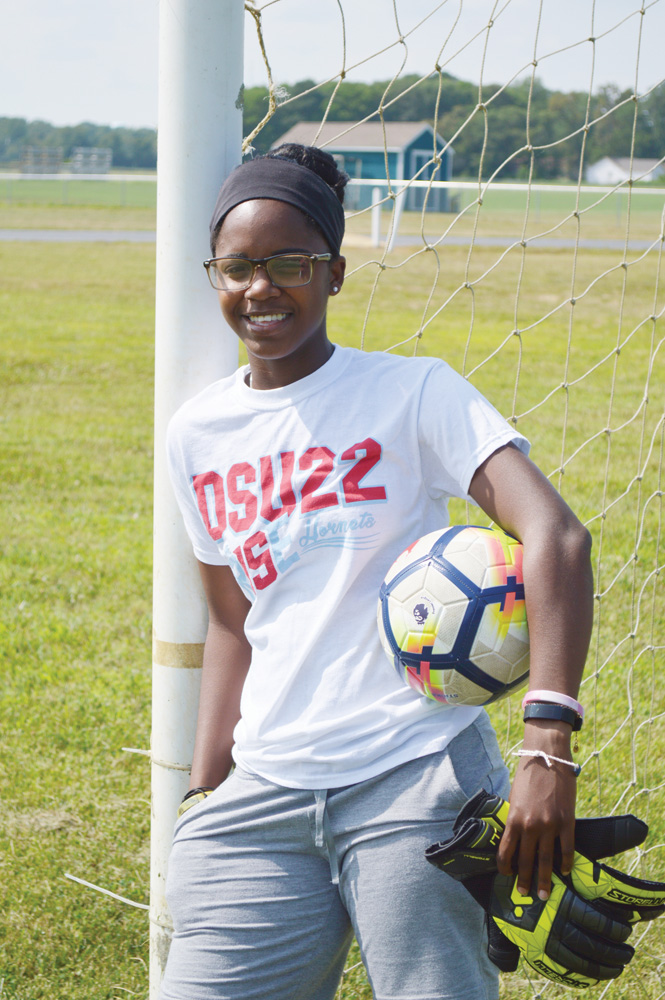 After year away, McCray returning to pitch for DSU

Former IR goalie to walk-on for Division I Hornets

Sometimes a year away from a sport helps an athlete realize how much they missed it.

Such was the case for former Indian River High School girls’ soccer player Fabrea McCray. The All-State goalie thought her competitive days on the pitch were over, but a year away has re-ignited the fire burning inside her to lace up her boots again.

McCray was recruited by several colleges to continue her education and athletic careers following her graduation from IR in 2018. She looked at those possibilities, but the draw of family members being alumni of Delaware State University led her to Dover.

“Missed the game, took the year off, went to school and focused on school,” said McCray about her year away from soccer. “I was blessed, and was able to live with the soccer team. I didn’t really know that that was what I was going to end up doing,” she said of the circumstances that have led to her return to the pitch, at DSU this time.

“My senior year of high school, I stayed in contact with the coach [at Delaware State]. She knew me, and I knew her. I was honestly kind of done with [soccer]. I didn’t expect to live with [the soccer team]. I was expecting to just go to school and focus on school.”

Upon arriving at Delaware State, McCray said, she really wasn’t enjoying herself, and readily admitted that she was hating her experience and her major. However, something changed, and her relationships and friendships she created with the soccer team sparked a renewed interest in the school and, more specifically, the sport she was known throughout the state for playing.

McCray had spent four years as the starting goalie for IR, and was recognized as a First-Team All-Henlopen Athletic Conference performer for all four of those years. During her final two years, she garnered Second-Team All-State honors.

Her time at IR was certainly recognized and appreciated by her coach, Steve Kilby.

“Fabrea was the type of player that offered incredible leadership and was a player we could count on,” the veteran IR field general said. “She allowed us to play in two state finals.

“We have had several solid goalkeepers in my tenure at IR — Sarah Long, Bethany Beck, Alex Myers and Taylor Mushrush — all of whom we were thrilled to have, but Fabrea owned a different skill set. Her athleticism, speed and agility, along with her commitment to hard work, really have put her in the position she is in, with this huge opportunity at Delaware State. I would expect her to compete for playing time and look forward to seeing her play.”

The DSU Hornets are members of the Mid-Eastern Athletic Conference, whose full members are historically black colleges and universities in the Southeastern and Mid-Atlantic U.S. There are 12 member schools that participate in 16 sports — eight men’s and eight women’s.

Delaware State is coached by former Delaware high school standout Kortney Rhoades, who was a four-time All-State selection for Padua Academy. She helped lead the Pandas to a pair of Delaware state titles during her playing days.