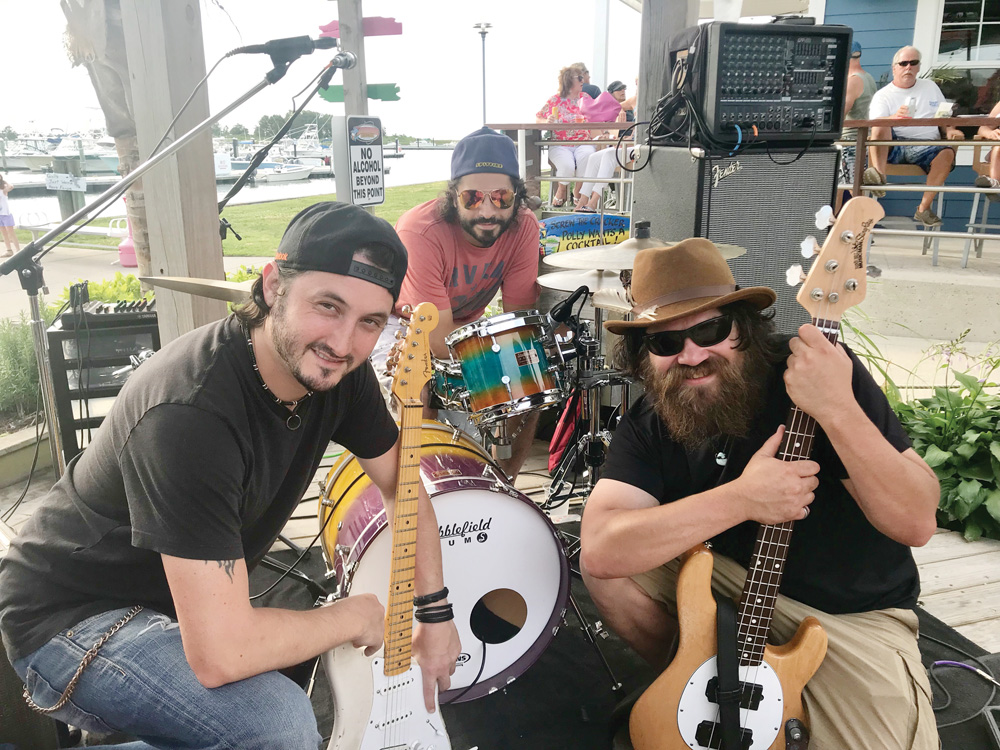 Lower Case Blues (lcb) will be performing on the Bethany Beach bandstand on Sunday, July 14, at 7:30 p.m.

“I associate Bethany with the formal start of our music career, because it’s where we were first booked to play regularly, at the Big Easy [now Fins] in 2003,” said Jake Banaszak, the band’s acclaimed guitarist. “We love the vibe when we play on the bandstand in Rehoboth and are really looking forward to the experience in Bethany. Bandstands are one of the few places that families of all ages can come out to hear us, often for the first time, and get to appreciate our kind of blues.”

“I’ve been listening to and watching Lower Case since their first appearance at the Big Easy,” said Mitchel King, who was then one of the restaurant’s management team and currently manages Cool as a Cucumber, a farmers’ market on Muddy Neck Road in Ocean View. “I guess I’ve seen them perform over 300 times. Every show is different. Every show, they leave it all on the stage, and they really appreciate their fans. I feel like I’ve seen them grow up. Paul, Jake and B.J. — you guys created memories for me I’ll never forget.”

In addition to Banaszak, lcb’s musicians are B.J. Muntz and Paul Weik. Muntz plays the bass guitar and is the primary vocalist. His bass solos are so attention-grabbing that the crowd stops talking to listen intently before yelling their approval. Likewise, Weik on drums and cymbals carries the music with intricate beats and awes the crowd with his masterful solos.

The trio comes from New Castle County, where they started playing together in high school. In fact, it was one of their teachers who encouraged them and suggested the band’s name. When they first moved to Rehoboth, they were 19 and 20 years old.

At that time, several people who admired their talent advised them to move from blues into a genre more popular with beachgoers, including classic rock-and-roll songs. But it’s the heavy improvisation and organic nature of the blues that appealed to lcb then and holds them in good stead today. Incredibly, the guys have supported themselves by playing as full-time, year-round, professional musicians for the last 16 years.

“It’s all about the blues,” as Muntz often says from the stage.

Lower Case Blues performs in multiple venues, both in the vicinity of the beach, as well as throughout the Mid-Atlantic region. They have opened for such notable performers as Buddy Guy, Robert Randolph, Blues Traveler and, recently, Galactic, a New Orleans funk band, at Dewey Beach’s Bottle & Cork. At the end of 2018 they won, for the third time, the opportunity to represent Delaware at the International Blues Challenge in Memphis this past January.

“We played really well and were disappointed not to win, but there was no doubt that we had the most and best fans who came halfway across the country for us. Our fans knocked it out of the park,” said Banaszak. An excellent video of their outstanding Memphis performance is available on YouTube.

Jeff Crawford was one of around 35 Delawareans who made their way to a cold, rainy Memphis to support the band and enjoy the congeniality of other fans.

“I jumped on the Lower Case train about 15 years ago,” Crawford said. “They were recommended by a friend from work who said, ‘They’re not your typical beach bar band.’ Talk about hitting a nail on the head! Their song list includes a fair amount of cover tunes, but they also have a good number of originals, which range from straight blues to smoky speakeasy sounds to raucous rockers, and are such a pleasure to hear.

“Their gigs are always fun and open. Not many bands can successfully go from Pink Floyd’s ‘Have a Cigar’ to ‘Lucy and Linus’ to Hendrix’s ‘Voodoo Chile Slight Return,’ but these guys do that kind of mix seamlessly and expertly. The in-song jams are wondrous to hear, and when they spin back to earth and hit that ‘1’ beat, we all know we’ve just returned from a wonderful ride. They always leave us smiling and in amazement at the end of the show. I plan on staying on this train for quite a while!”

After returning from Memphis, Lower Case Blues headed south for a tour of Florida’s Gulf Coast, followed by a few days performing in St. Thomas. And then it was time for Banaszak, the band’s booking scheduler, to start planning for the summer.

“We always enjoy playing at blues festivals,” said Banaszak. “This year includes the Berlin Blues & Jazz Festival, the Riverfront Blues Festival in Wilmington, Eastern Bayside Blues & Wine Festival and the Phoenixville Blues Festival. That last one, in Phoenixville, Pa., is especially sweet, as the organizers invited us after hearing our program in Memphis.”

All lcb gigs are listed on their recently updated website at www.lowercaseblues.net. The local repeating venues include Hammerheads Dockside at the Indian River inlet, the Big Chill, Murph’s, The Pond and High Stakes in Fenwick Island. As well as playing at the Bethany bandstand for the first time this summer, lcb also had an enthusiastically received, first-time showcase set on the Freeman Stage in Selbyville.

Lcb has several albums to their name and they are pleased to have recently released another. Titled “Lower Case Blues Live at Dogfish Head,” the album is just as described and just the way their fans love to hear them. It was expertly recorded, mixed and mastered by Dave Jarrell, who is Dogfish Head brewpub’s sound engineer. The album is available for $10 on Amazon.com and wherever the band is playing. The music from this and other albums is also available streamed online through various media platforms, including CD Baby, iTunes and Spotify.

If you appreciate great musicianship, music you will never hear played the same way twice, and a fun toe-tapping time, come on out and hear Lower Case Blues at the area’s most beautiful venue: the Bethany Beach bandstand, on Sunday, July 14.