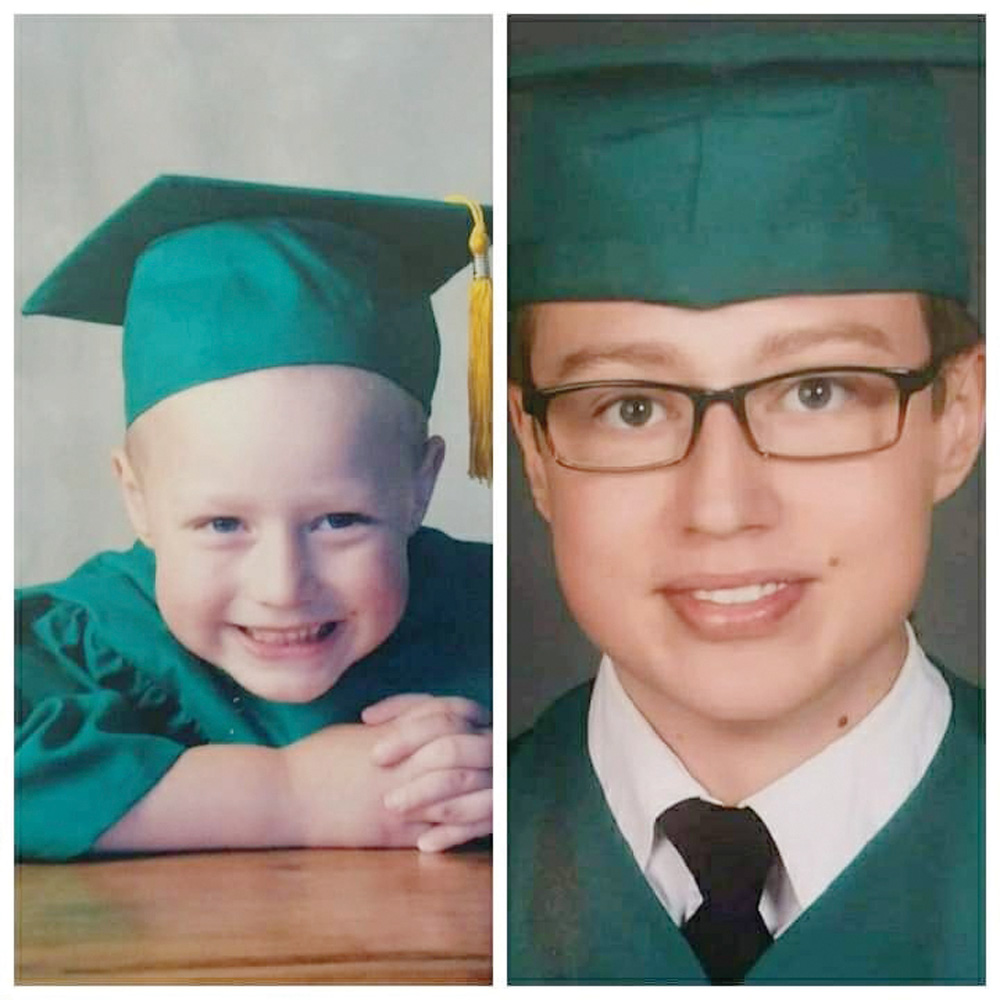 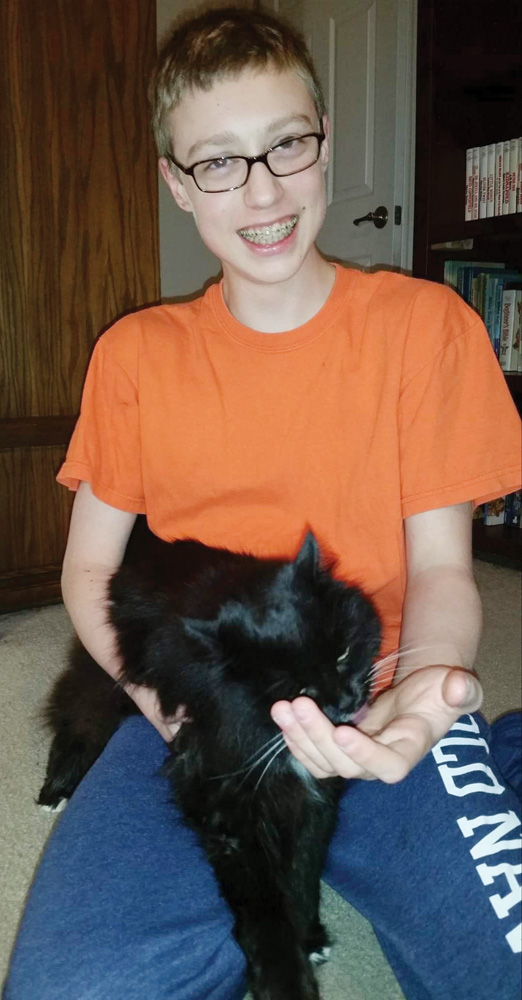 All those graduation cards that talk about “resting on your laurels” — that’s a nice idea, unless the recent graduate has a goal to reach and doesn’t want to waste time reaching it.

Gavin Smith didn’t take a break after graduating from Indian River High School in the spring of 2018 because he was so focused on his dream.

Two days after graduation, Smith, who turned 19 on June 30, was right back in the classroom — this time at Delaware Technical Community College in Georgetown. Smith’s focus on continuing his education is with one goal in mind: attending veterinary school.

His goal would be commendable under any circumstances, but for Smith, the mere fact that he graduated from high school and is now attending college is more than his family might have expected.

When he was 3 and a half, Smith was diagnosed with autism. At that point, according to his mother, Heidi Lentowski, he was non-verbal. Through Delaware’s Early Intervention services, he began receiving speech therapy, occupational therapy and behavioral therapy, she said.

It was play therapy, though, that seemed to help Smith break through the walls between him and the rest of the world.

Playing with his cat, which he named My Princess Kitty, was the thing that broke down those walls for good, Smith and his mother agreed.

“When I started to talk, it was because I had gotten a cat,” Smith said. “My first words were actually naming my cat.”

“I think he just accepted it… It’s a part of him,” Lentowski said of her son’s diagnosis. “We’ve never made him feel like it’s a bad thing. He just… It’s him.”

“I can say this,” Smith said, “my mom never babied me through my autism. She actually pushed me to do better, and that’s how I was able to speak, rather than remain non-verbal,” he said. “So although my cat was part of me being able to speak, if it weren’t for my mom pushing me to do it, I wouldn’t have done it.”

“It was really hard at first,” Lentowski said. Before he was able to get services through his school district in Berlin, Md., “we had a team of people come in and do puzzles with him and things like that,” to help evaluate his cognitive abilities, she said.

Along the way, he was evaluated at both Kennedy Krieger Institute, an affiliate of Johns Hopkins University in Baltimore, and A.I. du Pont Hospital for Children in Wilmington.

Lentowski said she feels the early intervention services Smith received from the time he was diagnosed were the key to “pulling him out of the bubble” of autism.

Initially, Smith communicated through picture boards, which he would point to when indicating what he wanted. His mom marvels now at the advances in assistive technology since then, allowing non-verbal people to use text-to-speech and other ways of communicating, in lieu of speaking.

Smith overcame other obstacles that autism presented, when he went to public elementary school, including dealing with sensitivity to noise.

“The fire drill was always a really big deal for me. I would have to cover my ears and try to get out as fast as possible,” which his one-on-one aide would help him with by giving him earplugs to lessen the noise.

Lentowski said her son would also wear earplugs in the school cafeteria because otherwise the noise bothered him to the point where he couldn’t eat there. Social interactions can also be a challenge for autistic people.

“It kind of makes it hard, because with sarcasm, you’re basically saying the exact opposite of what you mean,” Smith said, adding that he thinks that there are probably people without autism who struggle with that, as well.

Other issues include difficulty focusing if there is a distraction in the room, he said.

“If there was a bug in the room, my focus would be on that, instead of on the topic at hand.” Now, he said, “I try to focus; even if my eyes aren’t on the board, I keep my ears open.”

Smith said, however, that autism gives him unusual gifts that he now can share with the world.

“You see things differently,” he said. “I could watch a show a certain amount of times and memorize a character’s voice and be able to mimic it,” he said. For example, Smith can mimic three characters in his favorite TV show, “The Simpsons” — Homer, Bart and Nelson, who is the boy who bullies Bart.

Now that he has graduated from high school, he has a new challenge: “I’m trying to transfer to a four-year university,” he said, “but I’m having trouble securing a loan for it. While he said he has considered working while going to school to help pay his bills, he worries that would distract him from his “ultimate goal,” which is to become a veterinarian.

Smith is no stranger to hard work. He was dual-enrolled in a college course while still in high school, and started his courses at DelTech two days after graduating from high school. He has now completed 60 college credits. Lentowski said that if Smith attends the University of Delaware, his preferred school, he would actually start as a junior.

She said that, in order to move toward his goal, he needs to attend a college where he can get hands-on experience with animals, and the University of Delaware offers that type of program. Although going away to college would be a “big step” for Smith, she said he has already successfully attended a five-week program there while a junior in high school, which boosted his confidence and would make for “an easy transition.”

Lentowski said her son has applied for more than 30 scholarships, and although he received one when he graduated, “It paid for one book.”

“It’s just a bad situation. It’s hard to say to your kid, ‘You’ve worked so hard and you’ve done so much to get to this point… and I don’t know how we’re going to make this work,” Lentowski said, fighting back tears as she spoke. It was difficult for Smith to see his mom so upset; his face darkened with sadness and concern as she spoke.

“He’s overcome so much and put in so much effort to be able to do this… to make his dream come true,” she said. “And… we can’t figure it out. I feel alone in this situation,” Lentowski said.

Although she said that throughout Smith’s life she has reached out to online autism groups, she has not been able to find local support.

She said that Smith was given the option, when he graduated, through his case worker with the state Department of Social Services, to get a job right out of high school, after some vocational training, “in an ice cream shop” or something similar.

“For a lot of kids, that is wonderful,” she said, “but I feel like that would be holding him back, because he is capable of doing more.”

Lentowski said she finds it extremely frustrating that there is not more support from state agencies “to help with him with his dream, to help him further his education.

“We’re basically on our own,” she said. “And that’s hard to figure out, when we’re learning as we go.”

Meanwhile, a friend has set up a GoFundMe page for Smith, although Lentowski said she did not want to go that route to pay for college for him. She said that when Smith was younger, she worked multiple jobs — many at night so she could be available during the day for her son’s therapies and doctor’s appointments.

“It’s always been that I could find a new therapy, or find a new doctor,” to help Smith reach his potential, she said. “This is something that’s totally different, and I don’t know how to make it work.”

More information about Gavin Smith’s dream and his family’s efforts to help him achieve it are available on that GoFundMe page, at gofundme.com/profile/jaime-pikor-igvm7.