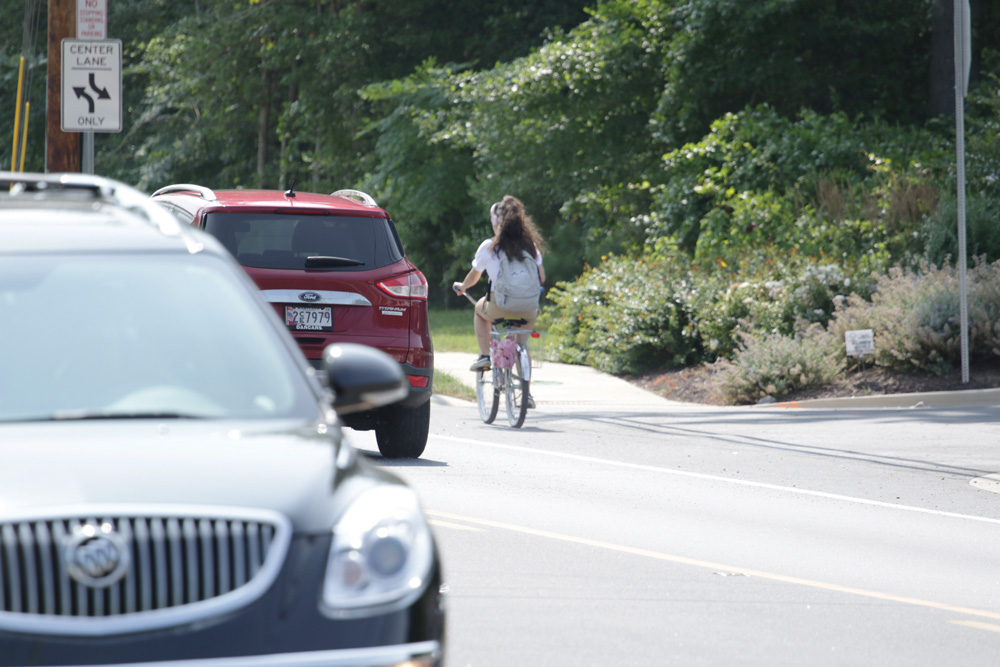 “Maybe we can get together and brainstorm and see if we can squeeze in a dedicated bike path on Route 26 to divert some traffic,” the chief told the Coastal Point this week.

“Route 26 is a state highway, so the Town has no say. We could put up more warning signs. We could maybe get DelDOT to look at that,” the chief said.

“It can be very dangerous. It’s awareness. You can’t take a leisurely bike ride down Route 26. You just can’t do that,” McLaughlin said.

“It’s not feasible to provide training to the vacationers. Foreign workers already receive training, and the older and more serious bikers tend to be more responsible, so I would really like see more awareness among the drivers,” said White, who represents Ocean View’s District 1.

“Bicyclists have as much right to use public roads as motorists, and since 2011 it has been a Delaware state law for motorists to leave a buffer of at least 3 feet and exercise appropriate caution when passing bikers. On the widened Atlantic Avenue, it is almost always possible for motorists to comply with this law and, in my experience, a majority of them do,” he said.

White suggested erecting a portable message board when traffic is heavy, alternating it from the Assawoman Canal in the east to the Millville border on the west side of town.

“Or see if we can get one of the electronic billboard owners in Clarksville to run a PSA about watching for bikers, as a means to generate awareness among drivers,” White said, referring to a public service announcement.

“Bumper-to-bumper traffic severely restricts motorists from observing bicycles traveling in the bike lane on Atlantic Avenue. In particular, drivers who cross traffic to turn onto a side street or parking lot are unable to visually clear the bike lane due to the presence of cars in the roadway,” he stated in the release.

White said cyclists should assume they are invisible to drivers, who are often rushing to the beach with their minds in what he characterized as “vacation mode.”

“Many of them are not accustomed to sharing the road with bikers and are not on the lookout for them, especially when making turns,” White said.

As he sees it, there are three categories of bikers on Route 26: There are vacationers, “especially young kids in the Bethany Beach area, whose parents are often derelict; those who bike to and from work at all hours; and recreational serious bikers.”

“As a frequent bike rider, I was upset when I learned about the critical accident in Ocean View on Friday, June 28, which was disconcertingly similar to the fatal biking accident in town during last year’s Memorial Day weekend,” White said.

Agreeing, McLaughlin called the bike safety situation “really difficult” and said it’s “no fault of the biker or the motorist.”

“What it is, is cars can’t see the bikes and the bikes can’t always see the cars,” McLaughlin said.

The solution would be for bicyclists to come to a complete stop at every intersection, including residential driveways and business entrances, and look for oncoming cars, “but that’s not likely to happen,” he said.

“You see moms and dads on bikes, pulling kids in a stroller-type thing behind them. It’s really scary stuff,” he said.

On the night of July 4, a 27-year-old Annapolis woman, Kelly M. Scruggs, was struck while riding westbound across Coastal Highway in South Bethany. She was not wearing a helmet, and the bicycle was not equipped with lights, according to Delaware State Police. She later died.

In another incident last month, a 48-year-old cyclist was traveling west in the bike lane, approaching the shopping center at 29 Atlantic Avenue in Ocean View. A car being driven by a 46-year-old woman was stopped in the turning lane, waiting to make a left turn into the shopping center, police reported.

Westbound traffic yielded to her car, which turned left into the shopping center, but it collided with the bicycle. McLaughlin said the cyclist, whose name wasn’t released, suffered serious injuries and was transported to Beebe Healthcare by the Millville Volunteer Fire Department.

The cyclist in that incident was wearing a helmet. Police are still investigating both incidents.