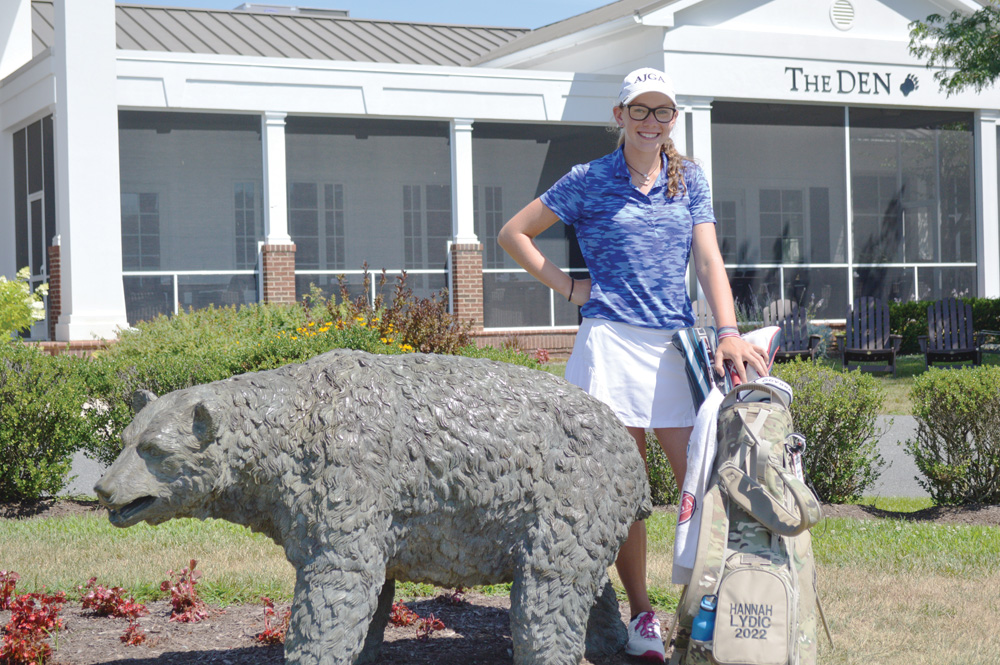 Pebble Beach — the golf course in California known throughout the golfing world — is one of the holy-grail spots on any golfer’s bucket list. Golfers young and old dream of one day being able to play the links that have been rated as one of the top public golf courses in the world.

Ocean View resident and Sussex Academy sophomore Hannah Lydic will get a chance not many are afforded, thanks to an opportunity she earned through the Delaware First Tee program.

“I am so excited,” Lydic said, as her smile beamed from ear-to-ear. “I’ve never been to California, or anywhere west of Colorado. I am just so excited for this opportunity and cannot wait.”

The daughter of Garrett and Leslie Lydic, Hannah Lydic went through a pretty arduous process to earn the oppor- tunity.

First, she had to fill out the online ap- plication, which featured several essay questions requiring 250-word answers. Once through that, she then had to have a phone interview with the selection committee, which she did while on her way to a tournament in Virginia. The ap- plication and interview were based on the golfer’s understanding and applica- tion of the values and life skills learned through First Tee’s programs, as well as their playing ability.

Lydic, who is a member at Bear Trap Dunes thanks to some anonymous sup- port, was the only player selected from Delaware, and is one of 78 participants of the First Tee Program that have been selected throughout the country to play in the 2019 PURE Insurance Champi- onship. The 16th annual event, which will be hosted by the Monterey Peninsula Foundation, will be held at both the Pebble Beach and Poppy Hills courses in Pebble Beach, Calif., on Sept. 24-29.

“This is a tremendous opportunity for Hannah, and we are so thrilled for her,” said Garrett Lydic, who will most likely be Hannah’s chaperone for the event. “We have such a great support system here at Bear Trap. Hannah is friends with all the members, and they are such a great extended family for our girls.”

Hannah and her younger sister Sarah are practicing or playing at Bear Trap every day, anywhere from five to seven hours a day. Whether they are on the range, practicing shots, or playing a round of golf to perfect those skills, the two are always surrounded by members who have taken literally accepted them as if they were one of their own nieces or granddaughters, and always have the girls’ best interest at heart, the family said.

To this day, around five years later, the girls have no idea who the anonymous person is or group of people are who pay for their memberships to play at Bear Trap.

“We still don’t know, even like five years later,” the 15-year-old admitted. “Everyone here is so supportive of us, which is great. We love playing here. It’s a very social, very happy place to be. It is very family-oriented, and it’s like we have like a hundred aunts, uncles and grandparents. They joke with us that ‘If you ever do anything wrong...’”

According to the tournament web- site, the PURE Insurance Champi- onship Impacting the First Tee is the only event of its kind, where 78 First Tee teenagers from across the country are paired up with 78 PGA Tour Champions players and 156 amateurs during an official PGA Tour Champi- ons tournament. The teens ranging in ages from 14 to 18 and will be playing for the First Tee Pro-Junior Team title. All told, participants hail from 27 states, each selected by a national panel of judges.

The full field of junior golfers was announced on a live broadcast of the Golf Channel’s “Morning Drive” on July 3. Pro golfers who will be playing with the juniors include Hall of Fame mem- bers Bernhard Langer, Mark O’Meara, Vijay Singh and Retief Goosen. Acad- emy Award-winner Clint Eastwood serves as the chairman of the PURE In- surance Championship tournament.

Play will take place on Pebble Beach Golf Links and Poppy Hills Golf Course on that Friday and Saturday in September, with the final round con- tested solely at Pebble Beach, on Sunday, where the top 23 First Tee juniors will compete based on their 36-hole per- formance. The tournament will crown one male and one female First Tee Jun- ior Champion on Sunday.

Over the years, almost 1,000 teens from the First Tee program have played in the PURE Insurance Championship, allowing for the once-in-a-lifetime ex- perience to meet, play and be mentored by PGA TOUR Champions players and amateurs in the field.

The First Tee program is a youth de- velopment organization dedicated to helping young people build character through the game of golf. The PURE Insurance Championship is one of 10 national opportunities provided by First Tee headquarters to encourage and mo- tivate kids as they progress through the program and toward higher education opportunities.

More on the First Tee program, as well as what it is doing locally here in Sussex County, will be featured in the Coastal Point in the coming weeks.