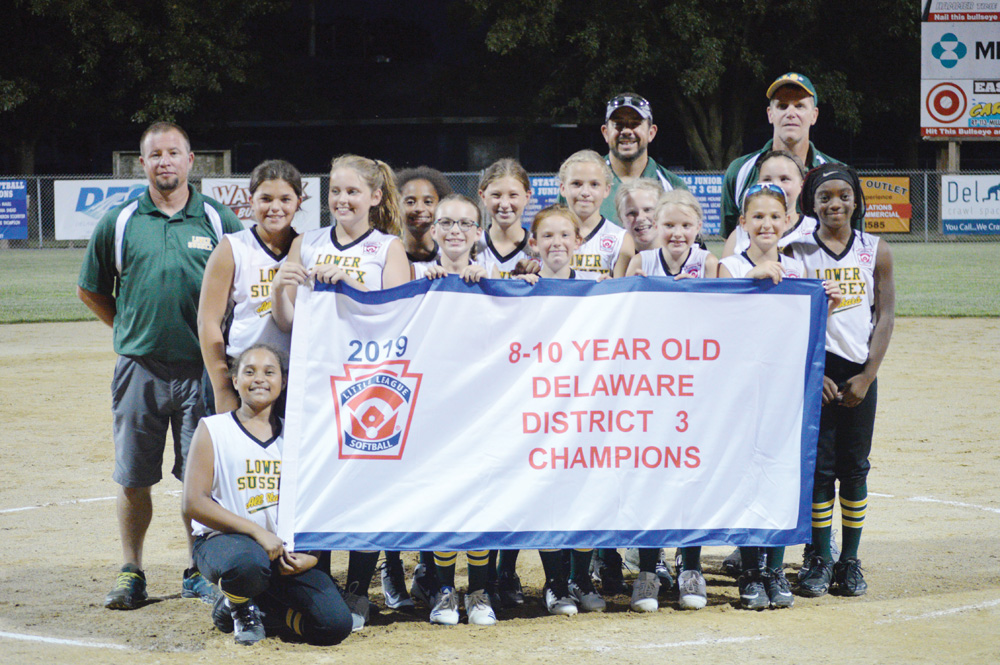 Postseason softball, baseball action as hot as the weather

The Lower Sussex Minor League softball team has certainly been as hot as the weather these past couple of weeks.

Fresh off a 15-5 thumping of Millsboro in the District 3 championship last Friday, July 12, the local ladies started their quest of adding a state championship to their résumé with a pair of opening wins.

Manager Jesse Bare said he has been thrilled with the effort his girls have given throughout the postseason, especially with how hot the weather has been.

“I could not be prouder of how hard the girls have played,” he said following the district championship game. “All of the girls have contributed, and it’s been a total team effort. They are having so much fun, and I am having fun just watching them play.”

The District 3 championship game capped a perfect 4-0 run in the tournament. The locals combined for 13 hits, with Baylie Williamson leading the way, going 4-for-4, while Cierra Lewis added a 3-for-3 effort. Sophia Bowen hit a triple, and Addy Clark went 2-for-2. Lewis also pitched a complete- game, with 13 strikeouts, and only gave up one hit.

“This has been an exciting two weeks, and our players have been asked to learn new positions, sacrifice their at-bat to advance the runner, and they all answered the call, giving 100 percent effort,” Bare added.

“What I am most proud of is that in the last two games, we have fallen be- hind on the scoreboard early, and they never gave up. They continued to do everything that was asked, believed in their skills, and continued to cheer their teammates on. That’s all a coach could ever ask for.”

LSLL opened state play with a contest against Canal Little League in Milford. The LSLL girls found themselves down 3-0, but batted back to win 4-3. Lewis again was stellar in the circle, with 15 strikeouts, and allowed just two hits.

The girls rallied in two separate innings with two outs, with Parker O’Shields delivering a hit scoring two runs. In the bottom of the sixth, with two outs, Sophia Bowen drove in the winning run, scoring Mariah McCabe with a line-drive shot to centerfield. McCabe stole second base to get herself into scoring position.

In Tuesday’s game, LSLL defeated a tough District 1 squad by a score of 6-3. Williamson got the start in the circle and tossed 2.1 innings, allowing no hits and two runs. Lewis picked up in relief with 3.2 innings, recording eight strikeouts and allowing one hit.

O’Shields led the offense with a perfect 3-for-3 effort, with two RBIs.

Addy Clark was 1-for-2 with a two-run double. Lewis also was strong at the plate, going 2-for-3.

The LSLL girls were set to play in the winner’s bracket final on Thursday, July 18, after Coastal Point press time. Results of the game can be found on the Coastal Point sports Facebook page.

The LSLL Majors baseball team could not get things going offensively in their winner’s bracket final on Tuesday, July 16, against Lewes-Rehoboth.

Offensively, LSLL managed just three hits, but somehow still held a 2-0 lead heading into the fifth inning of the game. But a leadoff walk, followed up by a home run, erased the Lewes-Rehoboth deficit to tie the score at 2-2 in the top of the fifth.

Then, in the top of the sixth, Lewes-Rehoboth would score the game-winning run, thanks to a pair of walks to start the inning, a single to center that loaded the bases and a two-out walk.

Ruley was masterful in the team’s second-round 12-2 win over Georgetown as he fired a complete game.

The loss dropped LSLL into the winner-take-all championship game against Lewes-Rehoboth on Wednesday, July 17. The game was set to be played after Coastal Point press time, and results can be found on the Coastal Point sports Facebook page.