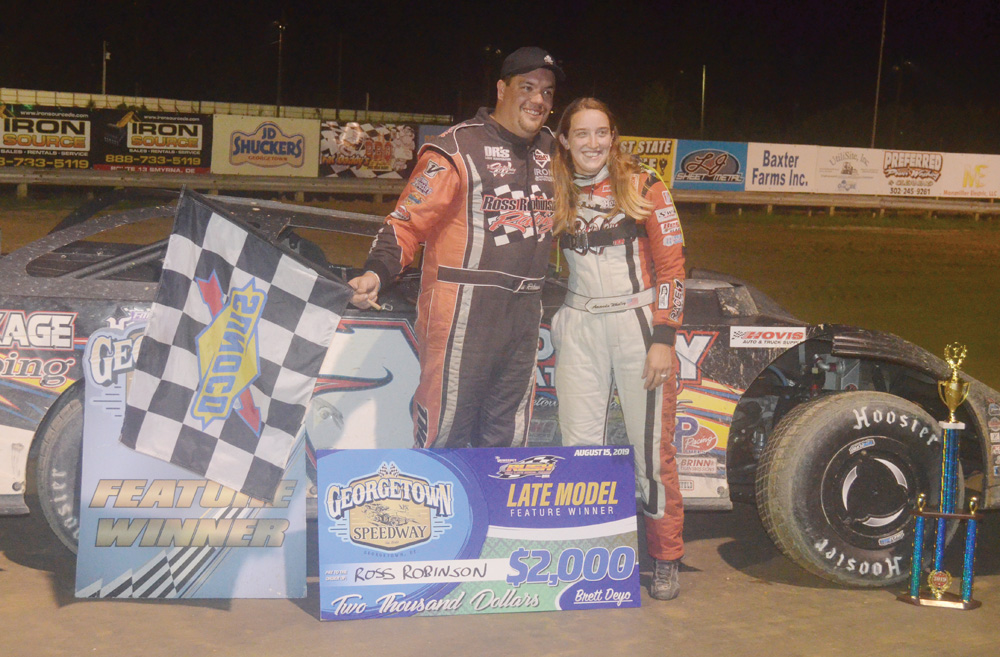 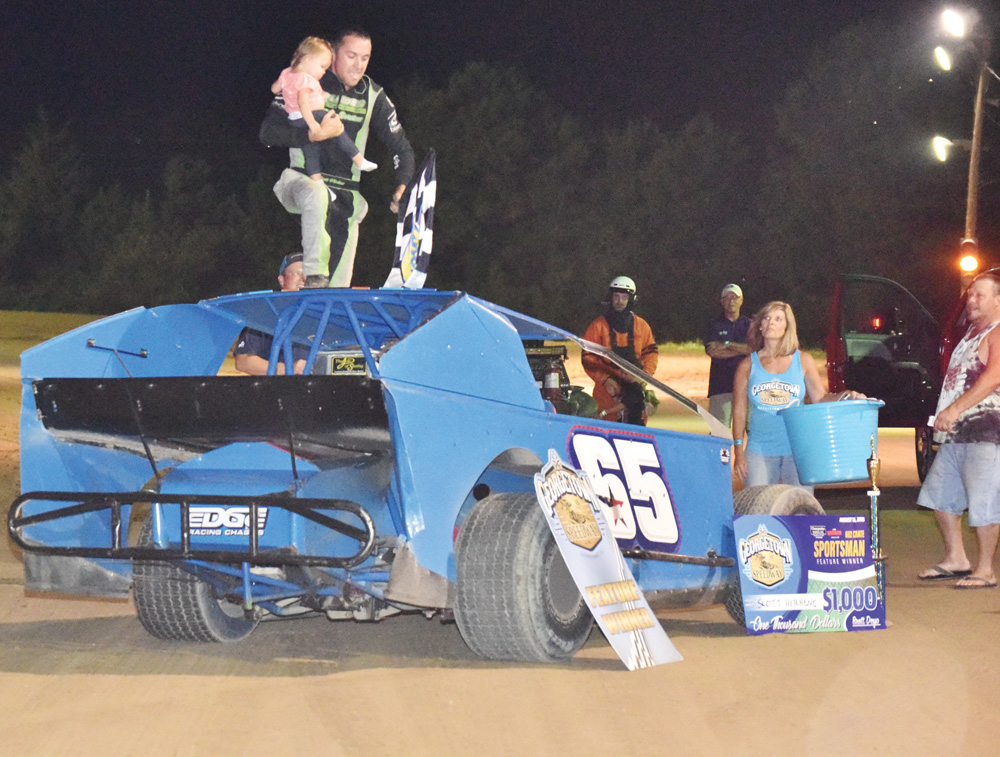 Race car drivers at Georgetown Speedway showed fans how much they are appreciated last Thursday, Aug. 15, during the speedway’s first-ever Fan Appreciation Night race. The track showed its appreciation with a $5-per-person grandstand admission.

Georgetown natives Ross Robinson and Joey Warren roared across the RUSH Late Model feature finish line 1-2, separated by about a car length. From the pole, Robinson led the 25-lap, caution-free feature with perfection. Behind them, the battle for third was providing the excitement.

Amanda Whaley of Millsboro, who is Robinson’s fiancée, spun out in her heat race, forcing her to start 11th in the main. From there, she quickly sliced and diced her way to fourth, behind Gumboro-based Nick Davis. After heavy pressure from Whaley, Davis eventually surrendered the position to Whaley, who finished there. Tyler Reed of Milton capped the top five.

“It was an exciting race,” Robinson described, “I knew this race was on the first corner. I had to get the lead, and then be able to dictate the race in case we had a restart. Luckily, we were able to do that. We got hot in lapped traffic, and things got a little hairy, but the car handled really, really good. I can’t complain about this car. So far this year, nine times out of 10, we’ve been the one to beat. We’re always in the mix. It’s been a good year for us.”

Behind him, Laurel-based James Hill, who missed the qualifying redraw, was quickly threading his way to the front. Hill popped up in second during the final laps, turning quicker laps than the leader. Hitchens held on as time expired on Hill’s campaign. White was third across the stripe. New Jersey native Tom Serby and Laurel-based Adam White were third and fourth.

“In the heat race, we were real fast,” said Hitchens, the track’s all-time leading Crate 602 Sportsman winner. “We’ve just got this place figured out. During the feature, toward halfway through, I thought we had a tire going down. We tightened the car up a little bit, but the track never really dried out. So I just had to drive the car real hard on the throttle to get it to turn to the center.

“It’s phenomenal. I can’t say enough about the people who help me: Brandon Blades, Big Herb, Poppa B, my dad, my girlfriend, all my buddies, and Blake. I just hope we stay on this roll. These good rolls come and go. You can get on a good roll or a bad roll for a while. We’re just riding the wave as long as it goes.”

For Kirk Lawson, a wet, sticky track was just what the doctor ordered. The Georgetown native used the track’s condition to his advantage, climbing the high side to pass by the entire Little Lincoln car field. But after taking the checkered flags, Lawson’s car caught on fire underneath.

“Man, I didn’t know I was on fire,” Lawson commented while climbing out of his machine. “Man, I tell you — we really love this track. It’s big, it’s fast, and there’s always a cushion on the outside, and that’s where I like to go.

“This hotrod handles real good. My crew does a really good job of taking care of the car. I just hang onto it,” he said, adding, “I want to thank Melvin Joseph, Allen and Robbie — they work on the car and get it right every week. And, of course, I want to thank our sponsors. We couldn’t do it without them: Stockley Tavern, Leisure Point, First State Flag, Wilkins Wildlife and Mark Pennywell Insurance.”

Jordan Herbert and Matt White were second and third, ahead of Bunky White and Wayne Seaton, who completed the top five.

“It was a hard-fought win. It wasn’t easy,” said Smith, who pilots a 1998 Ford Ranger. “We started 10th, made it up to second, run a couple of laps in second around Lap 7, and then we took the lead and just kept it from there.

“The truck handled perfect tonight,” he said. “The track was perfect tonight — real tacky. I want to thank my wife for all her help and support; my brother-in-law; Schaffer’s Oil for providing the oil for this truck; Allen Bradley; and everyone else who helps us out.”

Pocomoke, Md.-based Ford driver Joe Waters made a daring outside pass on Brandon Riefier for the Delmarva Charger lead. Running behind Riefier in the top five were Chris Martinez, Robert Paczkowski and Greg Nailor.

“The high line seemed to be the fastest, and these Fords like the high line,” Waters said. “We’re just putting in a lot of work, and we’ve got this thing running.”

On Tuesday, Aug. 27, racing returns to Georgetown Speedway, with the always-exciting VAHLCO Wheels Blast at the Beach, presented by Melon 1, featuring the Bob Hilbert Sportswear Short Track Super Series (STSS) fueled by Sunoco Modifieds. There will be $6,000 waiting for the first racer to the finish after 35 laps in the Velocita USA South Region race.

In addition, there will also be a STSS Crate 602 Sportsman race, earning that winner $1,500, along with Delmarva Super Trucks and Delmarva Chargers.