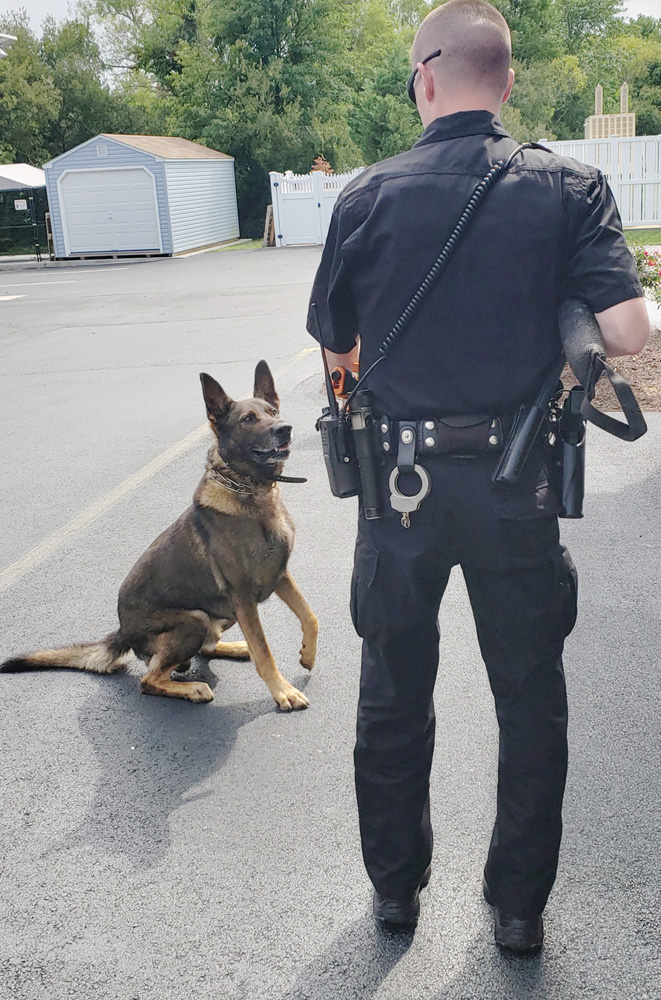 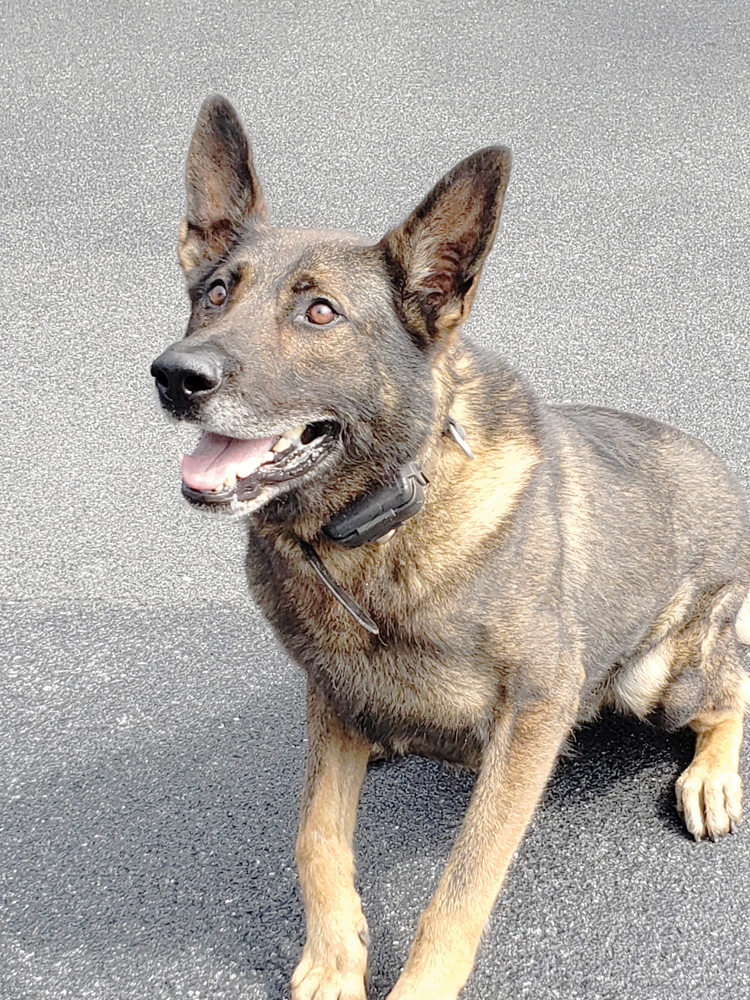 K9 Hardy on the job in Ocean View

Of course, the wedding band symbolizes his cherished marriage, and dedication to his wife, but, he said with a grin, “I’ve had her since high school, so she knows how I feel.”

The 6-year-old German shepherd/Belgian Malinois-mix has been with Hopkins since he was 13 months old, still in puppyhood.

When Hopkins talks about the dog, who has a rather aloof personality and who specializes in illegal-drug detection, he shares serious accounts of training and arrests, including stories about suspects who have admitted to having drugs in their cars when he told them Hardy was in the police vehicle, ready to begin searching.

Hardy is a working K9 officer who can locate several categories of drugs, whether they are hidden high in a room, maybe above a refrigerator, or in a crack or crevice, and who then alerts Hopkins. His ability is incredible, Hopkins said.

“We haven’t missed one yet. After he finds the drugs, I say, ‘Good boy. Thank you,’ and I put him back in the car,” said Hopkins, 29, a native of Delaware.

Within months of the dog’s arrival at the OVPD, police recovered tens of thousands of dollars in cash related to drugs and confiscated narcotics. Ocean View Police Chief Ken McLaughlin praised Hardy for helping not only Ocean View, but also being available to assist other police departments.

Hopkins and Hardy received training in North Carolina and Delaware. They share a by-the-book, strictly-police persona.

But ask Hopkins if Hardy has a place in his heart, and he nods, lowers his head, breaks into a wide smile and says, yes, of course, he loves him.

“He’s my dog,” he said tenderly. “He lives with me. We are together in the car every day. He’s going to live forever, you know,” he said with a slight nod, meaning he can’t imagine life without Hardy.

“He is anti-social. That’s just the way he is. He could have become anti-social because of the training he had, but he loves my two little daughters, and he’s OK with my wife. We have a big kennel at home. I have a pen for him and a run,” he said.

The 85-pound brown-and-black dog doesn’t venture inside the Hopkins home, “because everything we touch, we break,” his owner said of his canine partner. “He’s a wrecking ball,” he added.

Once funding was secured from a state violent-crimes grant, Hopkins went to Sanford, N.C., to select Hardy, who was born in Czechoslovakia and flown to the U.S., and had regular drilling with him.

“When I met him, he had already started training. He didn’t even really acknowledge my existence when I first saw him. The other dog I looked at was licking me and I could pat him. Hardy wanted to pull me everywhere. But he likes me now,” Hopkins said.

“We train in obscure places. We want the dog to stop and stare at what he detects. He knows he’ll get a toy afterward, so it’s not work for these dogs — they think, ‘I get to go play. I get to go hang out with Dad,’” said Hopkins, who last year spearheaded efforts to get canine emergency medical training for more than 50 K9 handlers across Delaware.

Hopkins raised $25,000 to pay for the training and was later awarded the 2019 Joshua M. Freeman Valor Award for his achievement of making the class free for everyone who participated.

At the time, Dr. Janice Baker, owner of Veterinary Tactical Group, told the Coastal Point, “We are teaching them tactical medicine for working dogs. It’s different than first-aid. It’s treating dogs with serious life-threatening injuries that have occurred in the line of duty in more tactical situation. … So, gunfire, stabbings, things like that, when there’s still an active threat.

“Basic canine first-aid is typically what officers learn, and that’s daily care, minor injuries, how to recognize health problems. This training is from instructors that are experienced in treating seriously injured dogs in the field. They get a lot of hands-on training scenarios in increasingly difficult situations, so by the time the course is over, they’ll automatically react and do the right treatment, regardless of noise, distraction, darkness,” said Baker, a veterinarian with a military special-operations background.

She said 15 to 20 law-enforcement dogs are killed in the line of duty each year, and twice that many are injured.

“Some dogs can have serious injuries but they don’t react right away because the physical effects haven’t taken affect. Those dogs may run off — they may look perfectly normal; sometimes they’ll look agitated; sometimes they’re unconscious and not moving at all,” Baker said.

The training is equivalent to the Tactical Combat Casualty Care program, said Hopkins, who now knows what to do if Hardy is injured or becomes ill.

His partner said Hardy’s a brave boy, unafraid of stairs that are open in the back, climbing, slippery surfaces or loud noises, even gunfire.

“He doesn’t get scared. It doesn’t hurt him, so it doesn’t bother him,” Hopkins said.

“He’s not a baby at all. He doesn’t lick my face. He has a big black Kong toy. He loves that thing. He chews the heck out of it. He is driven by toys and food,” Hopkins explained.

“To work with Hardy, you need patience, more than anything, because he’s a hard-headed shepherd-Malinois mix. Malinois are just little devils, but he was mixed on purpose, to have the energy of a Malinois and the size of a shepherd,” he said.

“He’s comical when he’s frustrated with me. It is unreal what he understands. He is incredibly intelligent.”